[ Editor’s Note: If our visas are cleared, Gordon and I will enjoy early Spring in Iran, without the flowers unfortunately, as it will be a bit chilly.

But we are really looking forward to going as, due to a paperwork snag in 2015, we missed going once before to the Habilian Association Conference for Iran’s 16,000 terror victims’ families.

That’s right, they have suffered over five 9-11s. Americans know nothing of this because anything sympathetic to Iran’s history is blacked out of US media. The way Iran has been vilified here you would think that it had overthrown our country after WWII, put a puppet in charge, and taken over our natural resources, looting the country from one end to the other.

But wait, it was we who did that to Iran, and the current crop of NeoCons and puppets openly proclaim that is their goal once again. The spotlight must be shown on this depravity so it can be clearly seen for what it really is, a second attempt after the fake nuclear weapons program scam was exposed for what it was.

This year’s theme is a timely one. The President of Israel and the United States, Donald Trump, has declared Jerusalem the eternal capital of the Jewish people, a kind of declaration of war against the UN and international law. But we know agreements are not much of an impediment for a president that does not really read.

While the fate of Jerusalem-al Quds is the formal theme, the threat of unipolar monster will be another one lurking behind, as that is the well from which all future geopolitical misery seems to come.

We hope we will be able to add some extra time to see what historical sites we can in Ancient Iran. At our ages now, approaching 70, we can never assume we will be back again anywhere.

When statistically you have lived 75-80% of your life, it’s amazing how that can focus your mind on not taking a day for granted, as the grains of sand flow down the life glass. Visiting a cradle of civilization is not to be rushed… Jim W. Dean ] 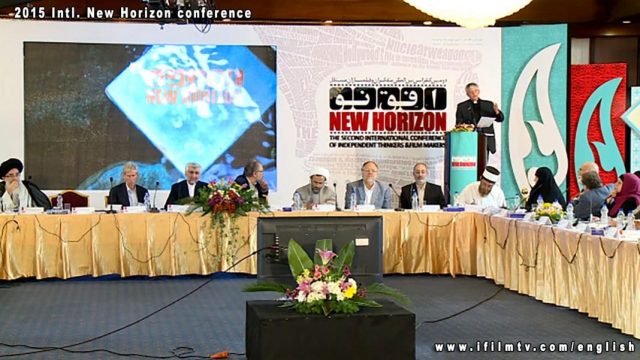 May 2018 bring greater cooperation among peace-loving countries and solutions which have been until now intractable world conflicts.

It is our pleasure to invite you to attend the 6th International Conference of Independent Thinkers and Artists (New Horizon) in Tehran. The conference will host academics, politicians, authors, journalists, activist, filmmakers, and movie critics and media commentators from around the world to discuss different viewpoints and show worldwide solidarity with PALESTINIAN oppressed people.

The theme of this year’s conference is “JERUSALEM/AL-QUDS, THE ETERNAL CAPITAL OF PALESTINE” which is organized by New Horizon Secretariat with cooperation of IRIB World Service (including PressTV), Iranian Parliamentary Directorate General for International Affairs as well as Secretariat of 6th International Conference in Support of the Palestinian Intifada, and will take place on March 3rd through the 5th – 2018.

So to fight hatred, conflicts and destruction we hope you will join us at this event, and be among the voice of love, truth, peace, and hope. Together we can create a new world and a new age of freedom for all.

The USA unilaterally has recognized all of Jerusalem as the capital of the Israeli entity contrary to years of precedent by the UN declaring in Resolution 181 as far back as 1947 that the Eternal City would have an international status. US action over all of Jerusalem was opposed by most countries in the world body.

Donald Trump’s declaration of Jerusalem as the capital of Israel seemed to confirm a long-held suspicion among many long-time observers: The US is not interested in a solution to the Palestinian-Israeli impasse. Yet, the US one-sidedly proceeded with its recognition at the instigation of the Zionist entity, flaunting its own previously held position and demonstrating that the US does not live up to its international commitments.

Task of the conference will be to examine options that can formally be presented to the UN for consideration to get the US to clarify its position on the status of East Jerusalem to help move to a solution to this perpetual question of Jerusalem’s status.