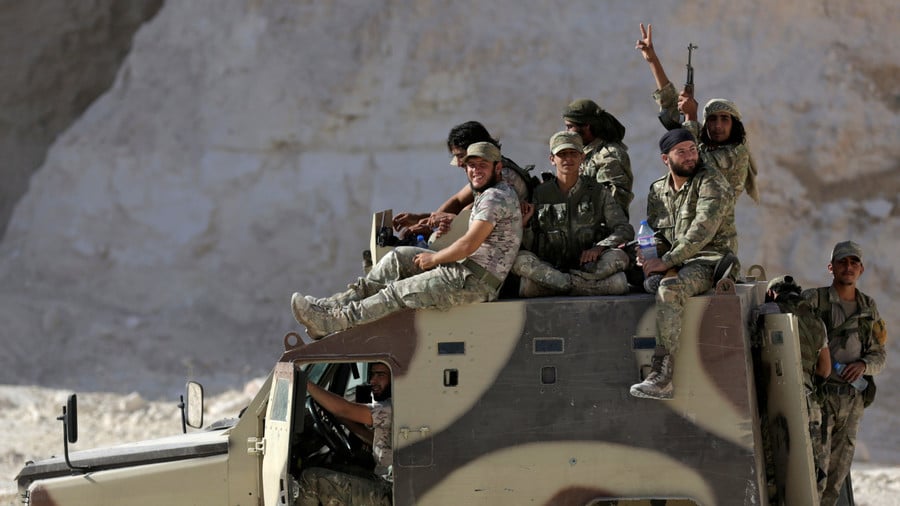 We are asked to believe that after being a victim of Western colonization and imperialism, Iran just wants to do this itself. This would be funny if it weren’t so sad.

For the gullible public to lap up this garbage is one thing, but savvy Congressional creatures who live in a ocean of deceit and spin can never deny that they fully knew they were assisting a foreign intelligence agency operation buy riding this fake pony.

Knocking the legs our from under the new scam is quite easy. All you have to do is focus on who those who have been targeted by the hegemonic triumvirate of the US, Saudi Arabia and Israel, where their opponents who attempt to defend themselves are spun as being a national security threat. It is an almost childishly simplistic scam.

But this is also their Achilles heel. We know it, because none of the spinmeister bigwigs will publicly debate VT on this topic. They know better. And forget fake media – those folks have been AWOL for a long time. They won’t debate us either.

While the triumvirate wastes taxpayer time and money on fake threats, one of the biggest threats – the massive Israeli espionage that goes on inside America – never gets mentioned, despite Congress being ground zero, including penetration of congressional staffs to keep a watch for any “errant views”.

This is all George Orwell, “1984 book” stuff. The honest security people frankly say Congress and the White House will not let them bust Israeli Intel networks, as it would embarrass our power structure and make the US look bad, so what are they supposed to do?

But the answer to that is simple: “go public that they are being compromised in their duties”, an espionage felony in itself.

They will then say “the Fox is in the chicken coup, it’s too late”, as they can just fire us, and they have a point there, especially now with Mr. Trump, the co-President of Israel. But then, we remind them that when Clinton was shopping for big donations for his library and he was close to pardoning Jonathan Pollard, the Justice Dept. and FBI bigwigs threatened to resign, and Clinton backed off. That was a good day.

I am not aware of another occasion like that, sadly. The people who compromised our government knew what they were doing, including how to hide in plain sight. It is one hell of a sad situation… Jim W. Dean ]

The Free Syrian Army is seeking the resumption of a suspended CIA military aid program, urging Donald Trump to “turn words into action” and confront what it claims is Iran’s expanding “hegemony” in the region, Reuters reports.

The Free Syrian Army (FSA), an alliance of anti-government insurgent groupings, is trying to persuade the US to revive the defunct CIA program which provided cash, weapons and instructors to “moderate” rebels, a high-ranking rebel official told the news agency.

Mustafa Sejari, a senior FSA official, said President Trump’s decision to suspend the CIA program is only benefiting Iran’s efforts to tighten its grip on the region.

Syrian rebels “endorse President Trump’s statements about the need to confront Iranian hegemony in the region,”but now “it is time to turn words into action,” Sejari said. He claimed that Iranian-backed militias “are expanding without serious resistance.”

The FSA, whose fighters have allegedly been complicit in war crimes and shown an inclination to Islamic State (IS, formerly ISIS) ideology in the past, “asked for the resumption of aid” and “explained the dangers of leaving moderate FSA forces without support.”

Last July, the Trump administration reportedly ended the clandestine CIA program launched back in 2013 during Barack Obama’s presidency. The program, codenamed Timber Sycamore, had served as the backbone of Washington’s strategy to topple Syrian President Bashar Assad, but proved a comprehensive failure.

Besides the CIA program, other US train-and-equip strategies to bolster rebel groups in Syria have also been notoriously underwhelming. In 2015, General Lloyd Austin, CENTCOM commander at the time, told Congress that only four or five US-trained fighters had gone to Syria out of the 5,000 the Pentagon had been counting on.

Earlier that year, then Defense Secretary Ash Carter told the Senate Armed Services Committee that less than 1 percent of the 7,000-strong volunteer group had made it through the US military’s vetting process.

“As of July 3, [2015] we are currently training about 60 fighters,”Carter said. “I can look out at your faces and you have the same reaction I do, which is that that’s an awfully small number.”

Moscow has consistently warned against arming the so-called moderate rebel factions in Syria, pointing out that weapons supplied to them often fall into the hands of jihadist groups such as Jabhat al-Nusra (Al-Nusra Front) and IS.

Rights groups allege that some rebel factions might have committed war crimes against civilians. In May 2016, Amnesty International said armed groups surrounding the Sheikh Maqsoud district near Aleppo “have repeatedly carried out indiscriminate attacks that have struck civilian homes, streets, markets and mosques, killing and injuring civilians and displaying a shameful disregard for human life.”