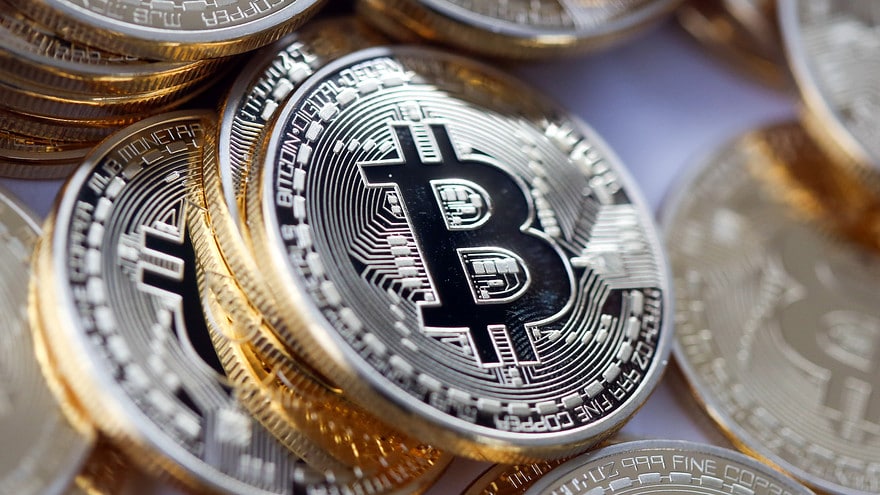 [ Editor’s Note: Finally we get a professional report giving a peek inside the Bitcoin exchanges to see how trading markets could be manipulated.

I always suspected this to be government run operation as a honey trap for illegally earned money, otherwise govs would have jumped in much quicker to impose regulations. It seemed impossible to me that they would just sit back and watch private currencies appear out of thin air and operate markets.

How long this madness can last is anyone’s guess, and I doubt many will be upset over those who get burned in the end. As P. T. Barnum always said, “There’s a sucker born every minute.”

I stand corrected on my semi-famous, “You just can’t make this stuff up.” They did it, and are still doing it. The question now is why did financial regulators allow it to happen? What benefit did they or the NSA, get watching what would happen with it? … Jim W. Dean ] 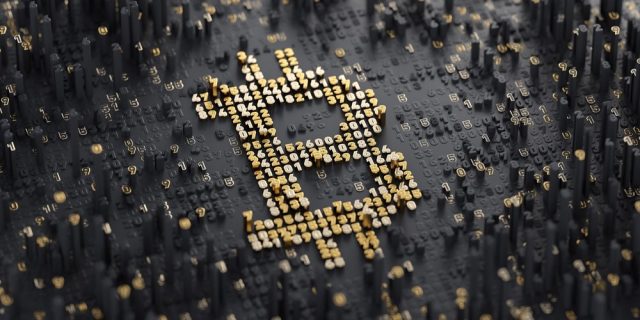 Researchers found that a single actor was “likely” behind several accounts that bought millions of dollars worth of bitcoin and drove the exchange rate in the US from $150 to $1,000 over the course of two months.
–

In a paper published in a recent issue of the Journal of Monetary Economics, a team of researchers examined the impact of fraudulent activity that occurred on the leading bitcoin currency exchange in 2013, and found that a single actor was “likely” behind a massive spike in exchange rates.

In their paper, “Price Manipulation in the Bitcoin Ecosystem,” the researchers from Tel Aviv University in Israel and the University of Tulsa examined Mt. Gox transactions over a ten-month period from February to November 2013, and found that approximately 600,000 bitcoins, valued at $188 million, were “acquired by agents who likely did not pay for the bitcoins.”

In an early version of the paper published by the Tandy School of Computer Science at the University of Tulsa, researchers said they discovered a group of users that had “??” as an entry for country and state fields, which usually contain location data or a null value.

After analyzing the accounts with abnormal location values, they found one account named “Markus,” which was different from the rest. Markus never paid transaction fees and “reportedly paid seemingly random prices for bitcoins.”

“Markus likely did not pay for the bitcoins he acquired; rather, his account was fraudulently credited with claimed bitcoins that almost certainly were not backed by real coins,” the researchers wrote.

An additional 49 accounts with abnormal location values were grouped into a collection of accounts that the researchers named “Willy.” Each of the Willy accounts bought exactly $2.5 million worth of bitcoin before they became inactive.

The researchers referred to the group of Willy accounts as “Willy Bot,” which they said collectively bought around 268,132 bitcoins for just under $112 million over the course of 65 days.

The paper claims that Willy Bots were allowed to make trades even during the times when the Mt. Gox trading API (application programming interface) went offline for several hours, while no other trading activity was being processed.

The paper states that during a trial in Japan, the former Mt. Gox CEO Mark Karpeles “confirmed that the exchange itself operated these accounts and that the trades were issued automatically.”

The researchers pointed to a Reddit theory, which claims that hackers stole around 650,000 bitcoins in 2011 and Mt. Gox founder Mark Karpales “took extraordinary steps to cover up the loss for several years.”

“By offering to buy large numbers of bitcoins, Willy could prop up the trading volume at Mt. Gox and ‘convert’ consumer ‘bitcoin’ balances to fiat money,” the researchers wrote. “Consequently, this theory holds that Willy was not trying to profit directly from these large purchases, but rather was trying to stave off collapse of the exchange.” 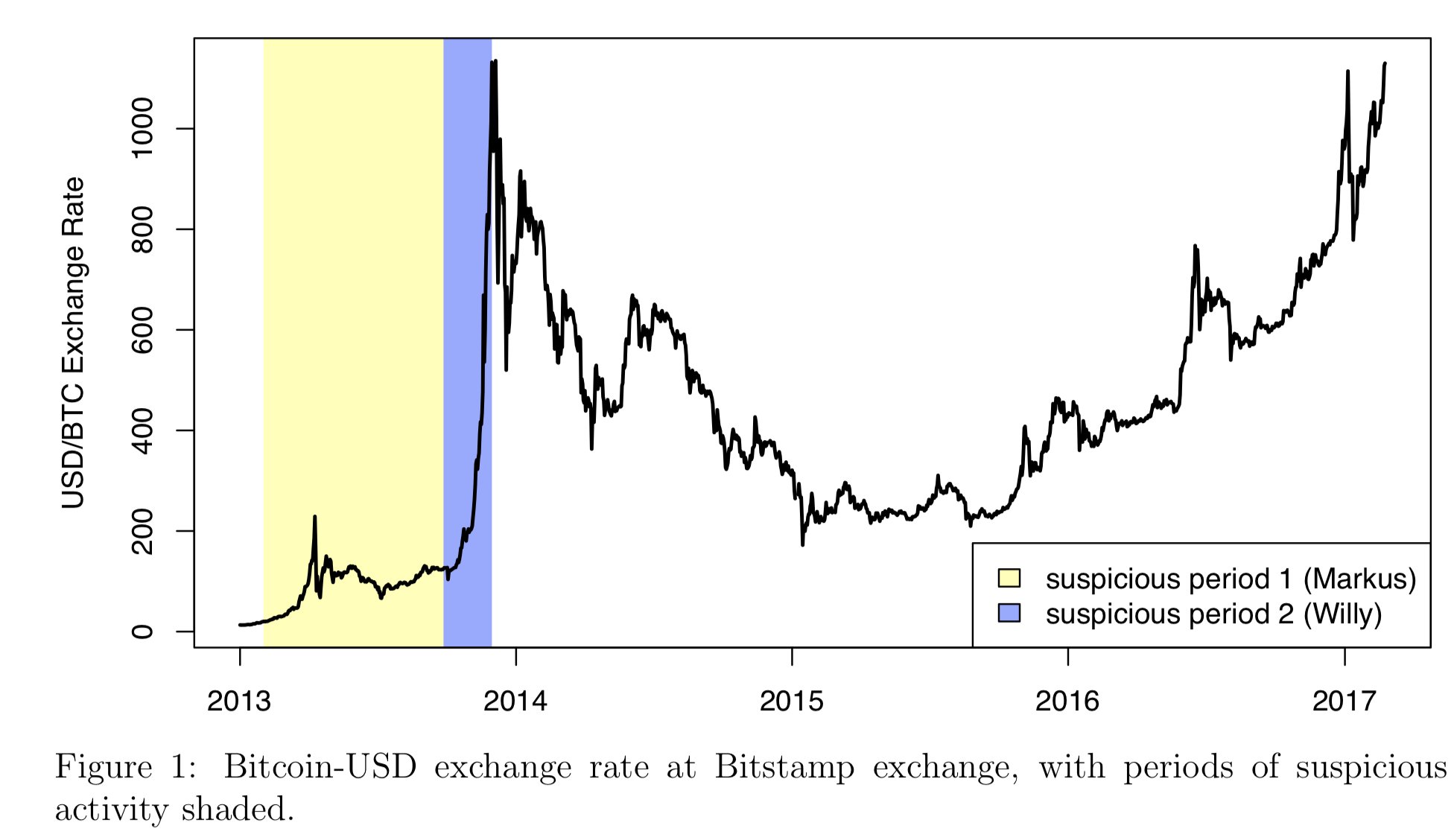 An analysis of Price Manipulation in the

Researchers said the fraudulent purchases had a “very strong positive association” to the “unprecedented” increase in the bitcoin exchange rate, which grew from around $150 to more than $1,000 in two months.

During those two months, the exchange rate increased by more than $20 a day, or an average of four percent. On the days that the suspicious trades were not active, the exchange rate decreased or remained “virtually unchanged,” according to the researchers.

“The publicly reported trading volume at Mt. Gox included the fraudulent transactions, thereby signaling to the market that heavy trading activity was taking place,” the researchers said, according to TechCrunch. “Indeed, the paper later shows that even if the fraudulent activity is set aside, average trading volume on all major exchanges trading bitcoins and USD was much higher on days the bots were active.”

The Markus account purchased an average of 9,302 bitcoins on each of the 33 days it was active, accounting for an average of 21 percent of Mt. Grox’s daily activity.

The Willy Bot accounts purchased an average of 4,962 bitcoins each of the 50 days they were active, accounting for an average of 18 percent of Mt. Grox’s daily activity.

Researchers warned that such manipulation could be occurring in current exchanges, and advised regulators to “begin taking an active oversight role as the bitcoin ecosystem becomes more integrated into international finance and payment systems.”