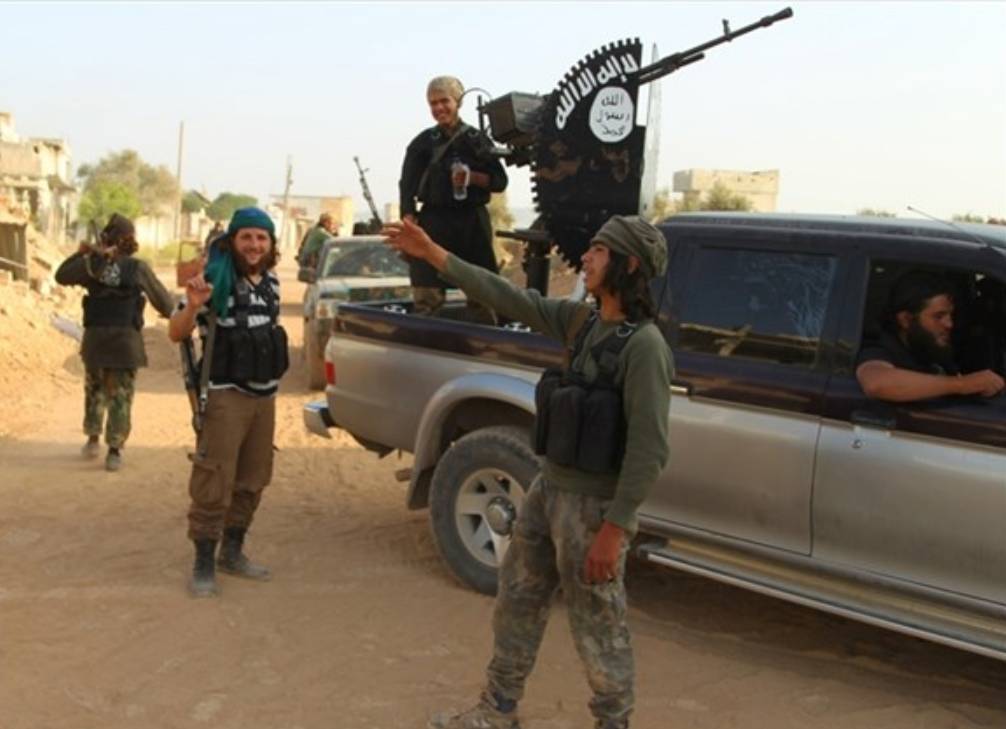 While the representatives of Free Syria Army (FSA) are in Washington soliciting the Trump administration to restore the CIA’s ‘train and equip’ program for the Syrian militants that was shuttered in July last year, hundreds of Islamic State’s jihadists have joined the so-called ‘moderate rebels’ in Idlib in their battle against the advancing Syrian government troops backed by the Russian airstrikes to liberate the strategically important Abu Duhur airbase, according to a recent AFP report [1] by Maya Gebeily.

The Islamic State already had a foothold in neighboring Hama province and its infiltration in Idlib seems to be an extension of its outreach. On January 12, the Islamic State officially declared Idlib one of its ‘Islamic governorates,’ has reportedly captured five villages and claimed to had killed two dozen Syrian soldiers and taken 20 hostages.

In all likelihood, some of the Islamic State’s jihadists who have joined the battle in Idlib were part of the same contingent of militants that fled Raqqa in October last year under a deal brokered[2] by the US-backed Syrian Democratic Forces (SDF). In fact, one of the main objectives of the deal was to let the jihadists fight the Syrian government troops and to free up the Kurdish-led SDF in a scramble to capture oil and gas fields in Deir al-Zor and the border posts along Syria’s border with Iraq.

Islamic State’s foray into Idlib, which has firmly been under the control of Hayat Tahrir al-Sham (HTS) led by al-Nusra Front since 2015, isn’t the only instance of its kind. Remember that when the Syrian government was on the verge of winning a resounding victory against the militants holed up in east Aleppo, Islamic State came to the rescue of so-called ‘moderate rebels’ by opening up a new front in Palmyra in December 2016.

Fact of the matter is that the distinction between Islamic jihadists and so-called ‘moderate rebels’ in Syria is more illusory than real. Before it turned rogue and overran Mosul in Iraq in June 2014, Islamic State used to be an integral part of the Syrian opposition and it still enjoys close ideological and operational ties with other militant groups in Syria.

It’s worth noting that although turf wars are common not just between the Islamic State and other militant groups operating in Syria, but also among the rebel groups themselves; however, the ultimate objective of the Islamic State and the rest of Sunni militant outfits operating in Syria is the same: to overthrow the Shi’a-led and Baathist-dominated government of Bashar al-Assad.

Regarding the Syrian opposition, a small fraction of it has been comprised of defected Syrian soldiers who go by the name of Free Syria Army, but the vast majority has been comprised of Sunni Arab jihadists and armed tribesmen who have been generously funded, trained, armed and internationally legitimized by their regional and global patrons.

The reason why the US has turned against the Islamic State is that all other Syrian militant outfits only have local ambitions that are limited to fighting the Syrian government, while the Islamic State has established a global network of transnational terrorists that includes hundreds of Western citizens who have become a national security risk to the Western countries.

Regarding the dominant group of Syrian militants in the Idlib Governorate, according to a recent report [3] by CBC Canada, Tahrir al-Sham, which was formerly known as al-Nusra Front until July 2016 and then as Fateh al-Sham until January 2017, has been removed from the terror watch-lists of the US and Canada after it merged with fighters from Zenki Brigade and hardline jihadists from Ahrar al-Sham and rebranded itself as Hayat Tahrir al-Sham (HTS) in January last year.

The US State Department is hesitant to label Tahrir al-Sham a terror group, despite the group’s links to al-Qaeda, as the US government has directly funded and armed the Zenki Brigade, one of the constituents of Tahrir al-Sham, with sophisticated weaponry including the US-made antitank TOW missiles.

The purpose behind the rebranding of al-Nusra Front first as Fateh al-Sham and then as Tahrir al-Sham, and purported severing of ties with al-Qaeda has been to legitimize itself and to make it easier for its patrons to send money and arms. The US blacklisted al-Nusra Front in December 2012 and persuaded its regional allies Saudi Arabia and Turkey to ban it, too. Although al-Nusra Front’s name has been in the list of proscribed organizations of Saudi Arabia and Turkey since 2014, but it has kept receiving money and arms from its regional patrons.

[4] Al-Julani was appointed as the emir of al-Nusra Front by al-Baghdadi:

Nauman Sadiq is an Islamabad-based attorney, columnist and geopolitical analyst focused on the politics of Af-Pak and Middle East regions, energy politics and petro-imperialism.