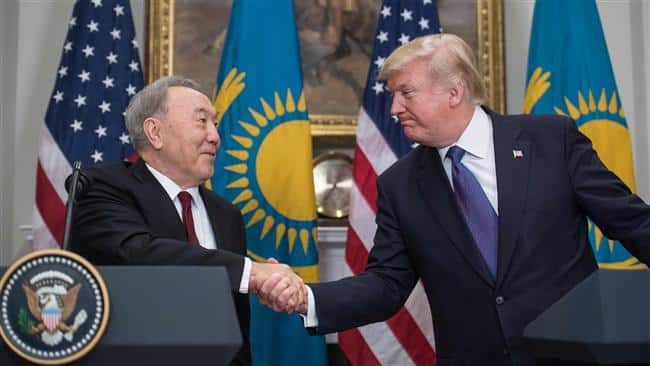 [ Editor’s Note: This is a bit of a Trojan Horse story from Freedom House. Sure, Trump is running with the thugs as he always has, having a long record of being a front man.

But that said, the comment on “growing evidence of Russian interference in the 2016 elections” showed Freedom House’s partisanship. The people there have been around a long time and are not stupid, but they think we are.

Freedom House and all the other fake NGO think tanks like them that use this claim when it fits their political agenda never mention a word about US interference in foreign elections, or how extensive it is, historically. It’s massive! We even have a certain department called the CIA, where doing that is near the top of their “To Do” list.

And because we do it in peace time, then that gives everyone else, especially those countries we have targeted with trying to put a puppet government in control, to “do unto others as they would do unto you”. They literally have permission from us to do the same.

In Russia’s case, I would estimate that half the US Embassy’s efforts were spent on building up the Russian opposition, using tons of cash to do it, literally buying demonstrations. When Moscow got tired of our endless subversion efforts, they cracked down on all the American NGOs that were funneling the money.

Overnight the roughly 35% opposition poll numbers dropped to 15%, leaving a nice clean 20% differential for everybody to see how effective was the US’ “election interference” in Russia.

As to how much the Russians are doing here, I would not claim to know. But they are not stupid and must know about the “vote flipping” that has been in our electronic voting machines, the self-erasing code, that beat them to the punch.

The whole point for electronic voting in the first place was for swinging close elections when someone wanted to. The fat lady has already sung that number.

Printed ballots would turn that critical subversion upside down, but with our defeated public, I don’t hear a word from anyone on that. No politician campaigns on an theme of “bringing real voting back to America.” That’s how deep the rot has gone.

And who would that be? How about the people that it’s always been who always want to control everything, the Deep State mobsters who were successful at spinning themselves as a conspiracy theory for a long time, but where about a year ago their “interference” in the use of that social commentary term ended.

We began to see “Deep State” widely used in media. Obviously, somebody flicked a switch after a meeting on that subject.

As for the Democrats, they had no problem with the disaster in Libya, when endless people told them that they had to have a plan for the country ready the day the fighting stopped. But all the government people said it was someone else’s job.

Obama was solidly behind the violent Ukraine coup because he was on board for moving US missile interceptors next to the Russian border, which could reach Russian ballistic retaliation missiles during their launch stage when they are most vulnerable.

Nice try, Freedom House. I get a big a big kick out of your Wikipedia opening description, “Freedom House is a U.S.-based[4] 501(c)(3) U.S. Government-funded non-governmental organization (NGO) that conducts research and advocacy on democracy, political freedom, and human rights.[5]

A government-funded, non-government NGO – a creature that would be very funny if it weren’t so sad, since it is just another wolf-in-sheep’s-clothing dining at the public trough. May “karma” soon come back to them and all of their brethren… Jim W. Dean ]

The first year of US President Donald Trump’s presidency has seen an increase in an ongoing trend of democratic decline in the US and around the world, mainly due to Trump’s attacks on the press and his administration’s brash foreign policy approach.

“Democracy is under assault and in retreat around the globe, a crisis that has intensified as America’s democratic standards erode at an accelerating pace,” according to a report released on Tuesday by Freedom House, a non-partisan think tank in Washington.

Erosion of US democracy

The new report shows that the Trump administration has facilitated the erosion of American democratic standards and contributed to the decline of global freedom.

While Freedom House has tracked a slow trend of declining democracy in the US over the last seven years, that decline accelerated in 2017 due to “growing evidence of Russian interference in the 2016 elections, violations of basic ethical standards by the new administration, and a reduction in government transparency.”

Freedom House also warned that the administration’s combative media tactics could ultimately weaken the country’s press and judiciary — a result that would carry significant implications for US democracy and America’s standing in the world.

“The core institutions of American democracy are being battered by an administration that has treated the country’s traditional checks and balances with disdain,” said Michael J. Abramowitz, president of Freedom House.

Former Secretary of State Madeline Albright, a Trump critic, said the report highlighted how Trump has undermined America’s ability to demand that other countries improve their records on rights and freedoms. She said foreign leaders who come under US criticism often look for opportunities to cry hypocrisy.

“We have been left open to not being a great example when our president is praising people who are taking authoritarian measures,” Albright said.

The report finds that 2017 was the 12th consecutive year of decline in global freedom. Seventy-one countries suffered net declines in political rights and civil liberties in 2017, with only 35 registering gains.

Once-promising states such as Turkey, Venezuela, Poland, and Tunisia were among those experiencing declines in democratic standards. The recent democratic opening in Myanmar was permanently damaged by a shocking campaign of ethnic cleansing against the Rohingya Muslim minority.