Tomcat nights with Son of Bibi – $20Billion or 400 shekels

… by Uri Avnery, with Gush Shalom

[ Editor’s note: This Uri piece almost slipped through the cracks, but someone fortunately spotted it for me. It is a gem. I don’t say that because it is a weighty topic… Netanyahu’s pitiful, unemployed kid whore-hopping with some “sons of billionaires”, in a government car with driver and bodyguard.

One of the party crew released a tape of him begging $120 from his rich friends for a hooker, reminding his pals of the big deals Bibi had thrown to their dads. Israel had another juicy Netanyahu scandal to enjoy.

Uri tells us it is the talk of the country. I can’t imagine why any Israeli would be surprised. Bibi is as groveling a personality as you can find in politics. I would think the Israelis would be bored by now.

And as for corruption, it is rampant there, with a few valiant public interest groups fighting the good fight, but that does not include our US media that does not print a word about it.

The Knesset is viewed as a piggy-bank for big business wheels, not so much for getting contracts thrown their way, but for special waivers on rules like zoning restrictions that allow them to turn plain-Jane real estate into a fortune, with legislation crafted just for them.

The last item I picked up from Israeli news is one of these anti-corruption groups having done a statistical study to calculate how much underground money was in the economy as a solid measure of how much corruption had grown over the years.

It was huge, they said; and it was one of the driving engines of having priced real estate beyond the means of many Israelis.

It reminded me of a briefing from Gordon once, how we poured endless cash into buying people up in post-Soviet Russia, (from the Wanta money I suspect), so much that it pushed the price of apartments in Moscow up by 50%.

Has Israel made the “shit hole” country list yet? People would say yes and no, and for a variety of reasons. American aid there has certainly gone down the shit hole, and few seem to mind here.

Is Bibi ashamed of his son’s conduct? I doubt it, but maybe just for the getting caught on tape. His trying to buy a hooker as his rightful share of his dad’s graft – that’s precious in a way.

Bibi probably told him, “Atta boy, chip off the old block. You might make something of yourself someday after all. And when are you going to bring that girl home so I can meet her?”

And out of respect for our own acting President who loves attention, can you imagine what a spoiled brat rich kid Trump must have been? He built a life around it, hookers and all, including the young teen runaways that flooded New York City to be party girls in the golden days, which might historically be referred to as the “Trump Era”… Jim W. Dean ]

Bibi’s Son, or Three Men in a Car 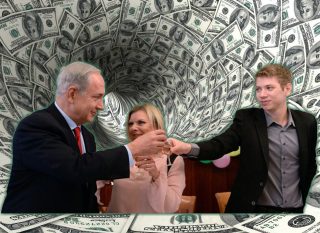 No, I don’t want to write about the affair of Ya’ir Netanyahu. I refuse adamantly. No force in the world will compel me to do so. Yet here I am, writing about Ya’ir, damn it. Can’t resist.

And perhaps it is really more than a matter of gossip. Perhaps it is something that we cannot ignore.

It is all about a conversation between three young man in a car, some two years ago. One of the young men was Ya’ir, the eldest of the two sons of the Prime Minister.

Ya’ir is named after the leader of the “Stern Gang”, whose real name was Abraham Stern. The original Ya’ir split from the Irgun underground in 1940, when Britain stood alone against Nazi Germany.

While the Irgun stopped its actions against the British government for the time being, Stern demanded the very opposite: exploit the moment in order to get the British out of Palestine. He was shot by the British police.

The modern Ya’ir and his two friends were on a drunken tour of Tel Aviv strip-tease joints, an appellation which often seems to be a polite way of describing a brothel.

Somebody took the trouble to record the conversation of the young men – the sons of the Prime Minister and two of the richest “tycoons” in the country. This recording has now surfaced. Since the publication, hardly anyone in Israel is talking about anything else.

According to the recording, Ya’ir demanded from of his friend, Nir Maimon, 400 shekels (about 100 dollars), in order to visit a prostitute. When the friend refused, Ya’ir exclaimed: “My father gave your father a concession worth twenty billion dollars, and you refuse to give me 400 shekels?”

The concession in question concerns the rich gas fields out in the sea near Israel’s shores. In an especially disgusting display of his utter contempt for the female sex, Ya’ir also offered to provide all his friends with the sexual services of his ex-girlfriend.

This recording raises a whole pile of questions, each more unpleasant than the next. First of all: who made it? Apart from Ya’ir and his two pals, there were only two persons present; the driver of the car and a bodyguard.

This raises some more questions. First, why is the 26-year old man provided with bodyguards at all, and for a tour of strip-tease joints in particular?

Ya’ir has no official function. No son or daughter of any former prime minister has ever been provided with bodyguards. No known danger threatens this particular son. So why must I pay for one?

The episode has drawn the attention of the public to this son of privilege.

Who is Ya’ir Netanyahu? What does he do for a living? The simple answer: Nothing. He has no profession. He has no job. He lives in the state-owned official residence in Jerusalem and eats at the state’s expense.

What about his record? The only service he ever performed was as a soldier at the office of the army spokesman – not much risk of meeting flying bullets there. You need a lot of pull to land such a cozy job in the army. Every reader can ask himself or herself: where was he or she when they were 26 years old?

Speaking for myself, at that age I had behind me several years of service in the Irgun underground, a year of continual fighting in a renowned army commando unit, a battle wound, and the beginning of my career as the editor-in-chief of a belligerent news magazine.

I have earned my living since the age of 15. That is not something special to be proud of – many young people of my generation have the same past (except the journalistic part, of course.)

Still, this part of the story can be explained by the character of this particular young man. Can a parent be held responsible for the character of his offspring? Like many politicians, Netanyahu had no time for his children. It’s the mother who bears most of the responsibility.

Sarah Netanyahu, known as “Sarah’le”, is generally disliked. A former airplane stewardess, who “caught” Binyamin at an airport duty-free shop and became his third wife, is a haughty and quarrelsome person, who is in perpetual conflict with her government-paid household personnel. Some of these quarrels reach the courts.

So this is all a family affair, except that it raises some profound political questions.  What is the social setting of the Prime Minister, himself the son of a poor university professor and a government employee for almost all his life?

His offspring consorts with the sons of the country’s richest peoples, who are enriching themselves with the active help of the Prime Minister, – Netanyahu influences the government funding of big projects. At the moment, the police are conducting at least four separate investigations into Netanyahu’s personal economic affairs.

Practically all of Netanyahu’s personal associates and friends are under police investigation. His closest friend, lawyer and relative is under investigation concerning the acquisition of immensely expensive German-made submarines. The navy claims that it does not need all of them.

This entire atmosphere of public and private corruption at the top of the state is very much removed from our past. It is something new, reflecting the Netanyahu era.

One could not even imagine anything like this in the times of David Ben-Gurion. His son, Amos, was implicated in some affairs which my magazine exposed, but nothing even remotely resembling this.

Menachem Begin lived for many years as an MK in the same two-room apartment where he had hidden as the most wanted terrorist in British Palestine. Golda Meir, Yitzhak Rabin and Shimon Peres all lived in modest circumstances.

Public humor calls Netanyahu “king” and even “emperor” and speaks of the “royal family”. Why? One reason is certainly the time factor. Netanyahu is now in his fourth term of office. That is much too much.

Power corrupts, and absolute power corrupts absolutely, as Lord Acton remarked. One can replace “absolute” with “long-term”. A person in power is surrounded by temptations, flatterers, corruptors, and as time goes by, his resistance wanes. That, alas, is human.

After the endless presidency of Franklin Delano Roosevelt, a relatively honest and effective chief executive, the American people did something extremely wise: it limited a president to two terms. I also have come to the conclusion that eight years is exactly right.

(That applies to myself, too. I was a Member of Parliament for ten years. In retrospect I have drawn the conclusion that eight years should have been enough. During my last two years I was less enthusiastic, less combative)

I don’t hate Binyamin Netanyahu, as many Israelis do. He does not really interest me as a person. But I believe that he is a danger to the future of Israel. His obsession with clinging to power makes him sell out our national interests to interest groups, not just to billionaires but also to the corrupt religious establishment and many others.

Such a man is unable to make peace, even if he wanted to. Making peace demands strength of character, like taking the risk of being overthrown. Such audacity does not even enter Netanyahu’s mind.

Tell me who your son is, and I’ll tell you who you are.