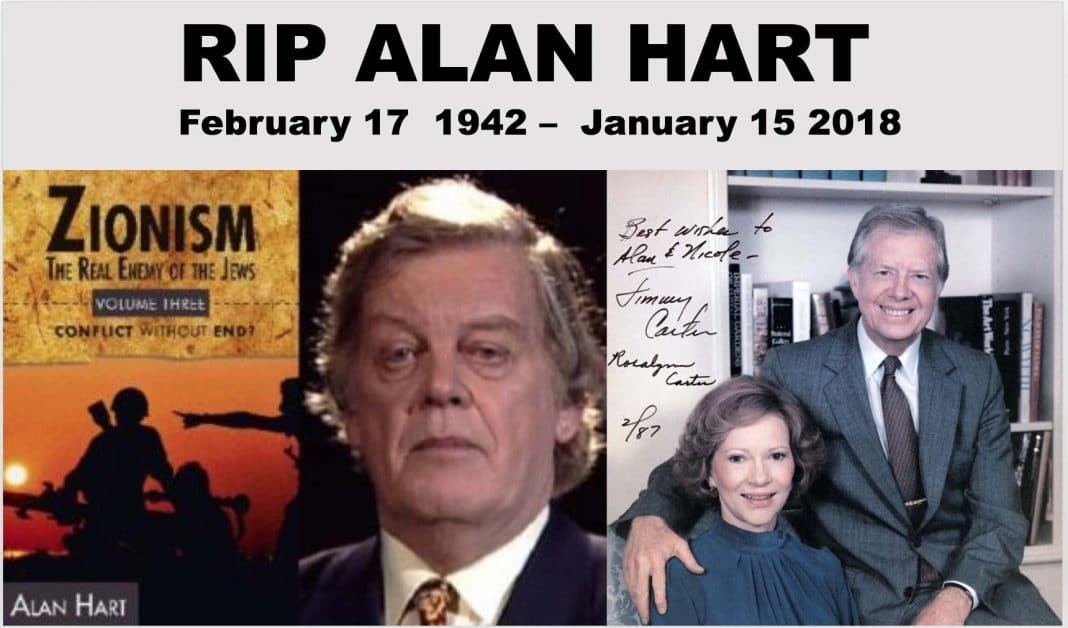 Alan Hart, the former BBC Middle East correspondent and author, passed away January 15th at the age of 75. Hart stands alongside Robert Fisk—I would say above Fisk—as the foremost British Middle East journalist of our time.

A personal friend of both Golda Meir and Yasser Arafat, Hart learned from his aborted peacemaking efforts (backed by Jimmy Carter and Viktor Rothschild, among others) that the greatest enemy of peace is not war, but the Big Lie. As his official bio page puts it:

Alan has long believed that what peacemaking needs above all else is some TRUTH-TELLING, about many things but, especially, the difference between Zionist mythology and real history…

I wish Alan had lived long enough to come on my radio show to discuss what I think may be the best book ever written on Zionist mythology vs. real history: Laurent Guyénot’s brand new From Yahweh to Zion: Jealous God, Chosen People, Promised Land…Clash of Civilizations. I think Alan would have agreed that Guyénot’s book is to the “Jewish question” what Alan’s Zionism trilogy is to the post-WW2 history of Israel vs. Palestine. Both Hart and Guyénot fearlessly expose Zionist myths, manifesting sympathy and goodwill toward Jewish people while forthrightly criticizing the outrageous lies and crimes of the Jewish-Zionist tribal elite.

I got to know Alan after he saw my work on 9/11 and decided to speak out, for the first time, on my radio show.

It took tremendous courage for a man of Alan’s stature to speak out on this “third rail” issue. He knew that the gatekeepers and guardians of official discourse would use his truth-speaking on 9/11 to try to further marginalize him. But unlike most prominent people, Alan Hart felt the truth was more important than having an easy life. So he always called it the way he saw it, and let the chips fall where they may. His integrity made it possible to live with himself, and to die with an easy conscience, knowing he had done his best to tell the truth and stand for justice. May we all have the courage to follow in his footsteps.