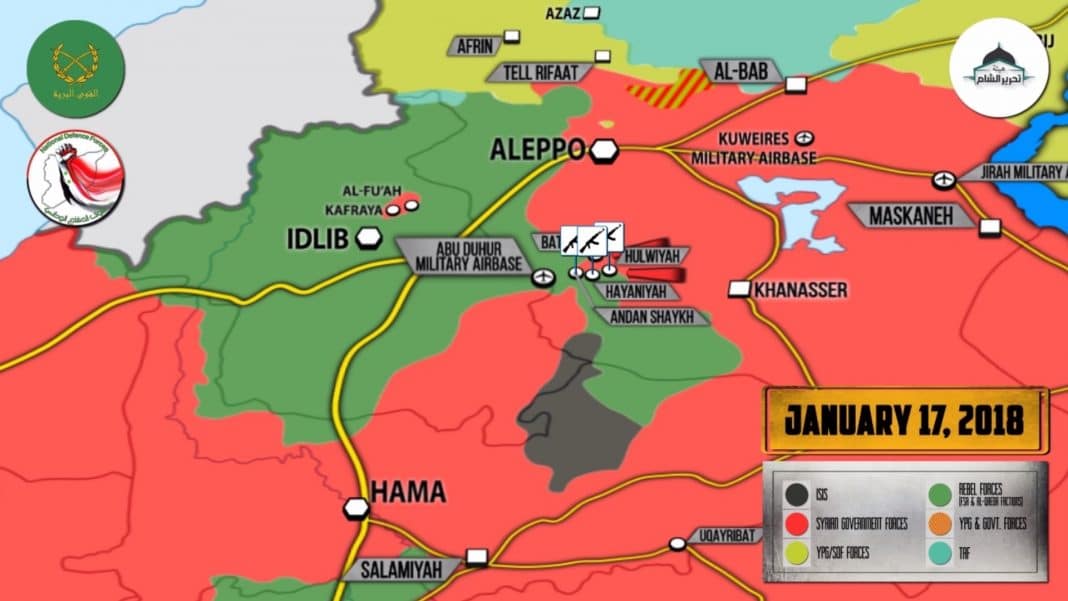 On January 17, the Syrian Arab Army (SAA) and its allied pro-government factions liberated the village of Batha and attacked positions of Hayat Tahrir al-Sham (formerly Jabhat al-Nusra) in Hulwiyah, Hayaniyah and Andan Shaykh in southern Aleppo.

On the same day, government forces repelled an attack by Hayat Tahrir al-Sham (HTS) in areas of Rubayah and Khuraybah in eastern Idlib.

Reports spread by pro-opposition sources that ISIS captured a large area from the SAA and even Sinjar are untrue. Fighting between the government forces and ISIS took place in the area of Duwayah where ISIS captured some positions from Liwa al-Quds.

On January 18, the clashes continued between the SAA and ISIS in the area while HTS was deployed reinforcements and conducted several fresh attacks on government positions southwest of Abu al-Duhur.

Turkey continued its bombing campaign against positions of Kurdish militias in the area of Afrin and deployed additional armoured vehicles across the border with the area. Pro-Turkish sources speculate that the operation there will be launched within few days. However, many depends on the behind the scene negotiations among the key powers involved in the conflict that are now ongoing, according to experts.

The US will keep an indefinite military presence in Syria in order to remove President Bashar al-Assad from power, Secretary of State Rex Tillerson revealed in a speech at Stanford University on January 17.

“Assad’s regime is corrupt, and his methods of governance and economic development have increasingly excluded certain ethnic and religious groups,” the official said. “Such oppression cannot persist forever.”

“A total withdrawal of American personnel at this time would restore Assad and continue his brutal treatment of his own people,” he continued.

Tillerson added that “free and transparent elections … will result in the permanent departure of Assad and his family from power”. No doubts the US believes that any elections that do not lead to the Assad departure are not “free” and “transparent”.

Currently, the US has at least 2,000 troops deployed in Syria according to official reports. The real number of the US military personnel and contractors deployed on the ground remains unclear.