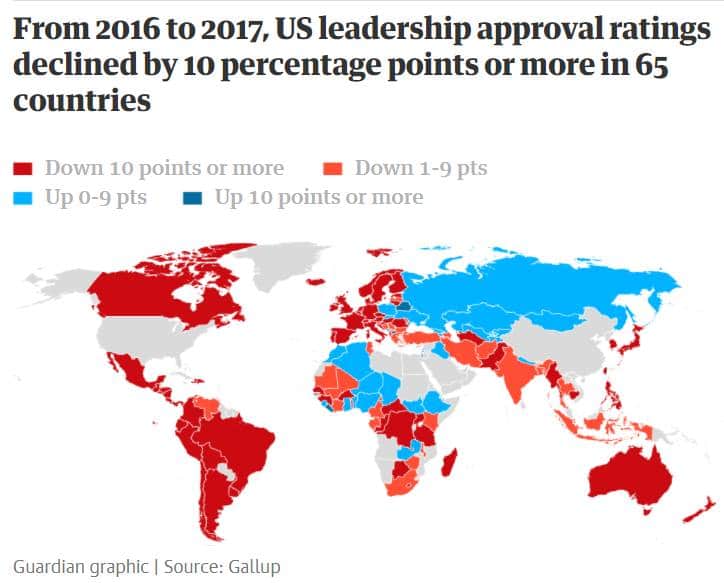 In just under half of the world’s countries – 65 out of 134 – US standing collapsed, by 10 percentage points or more. Global confidence in US leadership has fallen to a new low, and the country now ranks below China in worldwide approval ratings, according to a new Gallup poll.

The survey of opinion in 134 countries showed a record collapse in approval for the US role in the world, from 48% under Obama to 30% after one year of Donald Trump – the lowest level Gallup has recorded since beginning its global leadership poll over a decade ago.

The result comes after a separate Gallup survey found that Trump reaches the first anniversary of his inauguration with the lowest average approval rating of any elected president in his first year.That poll showed that Trump has averaged just a 39% approval rating since his inauguration. The previous low was held by Bill Clinton, whose first-year average was 10 points higher than Trump’s, at 49%.

The latest study confirms some of the worst fears of foreign policy analysts in the US and Europe that Trump’s “America first” approach, combined with his volatile and irascible personality, is weakening cohesion among western democracies in the face of a growing challenge from autocracies in Russia and China, and the rise of illiberal democracies and xenophobic nationalism inside Europe.
read more