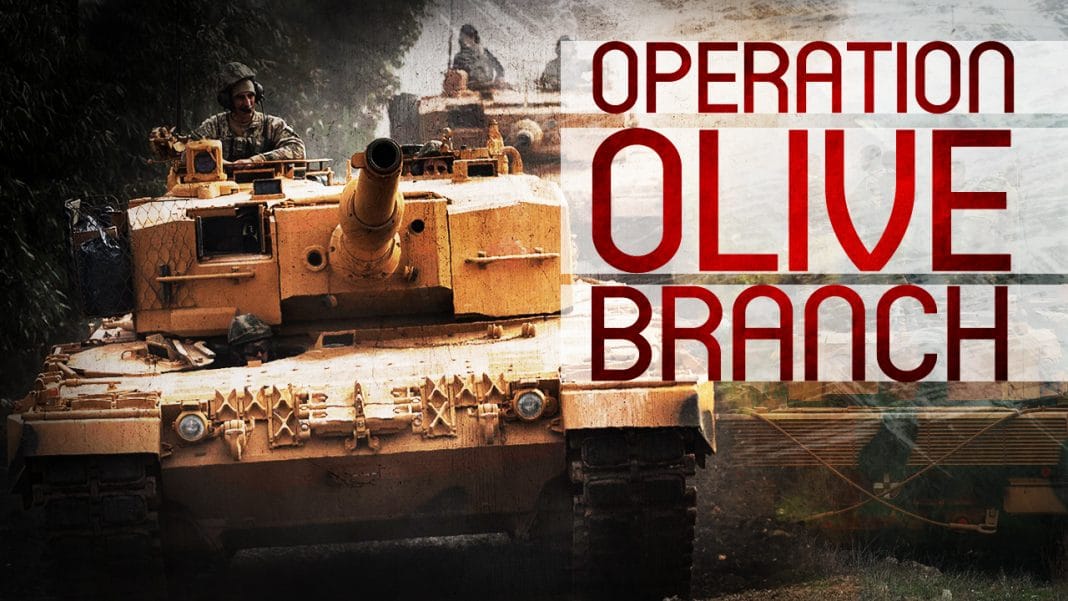 On January 20, the Turkish Armed Forces (TAF) officially launched a military operation in the area of Afrin and started conducting massive artillery and airstrikes on positions of Kurdish militias there.

“‘Operation Olive Branch’ has been started on Jan. 20, 2018 at 5 p.m., in Syria’s northwestern Afrin region to establish security and stability on our borders and region, to eliminate terrorists of PKK/KCK/PYD-YPG and Daesh [ISIS], and to save our friends and brothers… from their oppression and cruelty,” the general staff said in an official statement.

The Russian military relocated its forces deployed in Afrin “to ensure the security of Russian servicemen located in the district.” The country’s defense ministry added in an official statement that:

“Uncontrolled deliveries of modern weapons, including reportedly the deliveries of the man-portable air defense systems, by the Pentagon to the pro-US forces in northern Syria, have contributed to the rapid escalation of tensions in the region and resulted in the launch of a special operation by the Turkish troops.”

On January 21 at 11:05 a.m., units of the TAF and Turkish-backed groups of the Free Syrian Army (FSA) started a ground phase of the operation.

“The operation will have four stages, there will be a 30-kilometer buffer zone,” Prime Minister Binali Yıldırım said on the same day.

According to pro-Turkish sources, the TAF and the FSA captured the villages of Adah Manli, Balal Kuy and Kurin as well as captured four hills in the districts of Sheikh al-Hadid and Rajo. The advance is supported by warplanes, Bayraktar TB-2 unmanned combat aerial vehicles, T-122 Sakarya multiple launch rocket systems, various artillery pieces and armoured vehicles, including Leopard 2A4 battle tanks. About 200 positions of YPG/YPJ were destroyed by strikes, according to pro-Turkish sources.

In response, the YPG General Command said that no villages were captured by the TAF and all attacks were repelled. Pro-Kurdish sources also claimed that 15 members of pro-Turkish forces were killed and three TAF battle tanks were destroyed with anti-tank guided missiles (ATGM).

The YPG released a video of an ATGM strike at a Leopard 2A4 battle tank. However, the photo of the same tank later appeared online showing that it was only slightly damaged.

The YPG also accused Russia of allowing Turkey to attack Afrin and said that Moscow will be responsible for all civilian casualties there. It’s interesting to note that, according to reports, just before the start of the TAF operation, the YPG and its political branch PYD once again rejected a Russian-Syrian suggestion to allow the Damascus government administrative bodies to return back to Afrin.

Meanwhile, US Defense Secretary Jim Mattis said Turkey informed the US about the oepartion ahead of its start and added that Ankara has “has legitimate security concerns”.

The TAF operation in Afrin came amid a total collapse of Hayat Tahrir al-Sham’s defense in Idlib province.

On January 20, the Syrian Arab Army (SAA), the Tiger Forces and their allies liberated the Abu al-Duhur airbase and a large number of the nearby villages. In this way, the SAA fully encircled remaining forces of Hayat Tahrir al-Sham (HTS) and ISIS in eastern Idlib and northwestern Aleppo.

HTS launched a series of small-scale counter-attacks and targeted an SAA position in Suruj with a car bomb but was not able to stop the government advance. On January 21, government forces advanced north of the airbase and entered the town of Abu al-Duhur. On January 22, the SAA liberate this key town and continued operation to consolidate its recent gains.

Meanwhile, fierce fighting continued in Afrin. Kurdish forces in area faced the same problem from which their Peshmerga counterparts suffered in Kirkuk. They de-facto rejected close cooperation with all players except of the US, but Washington is not rushing to help.