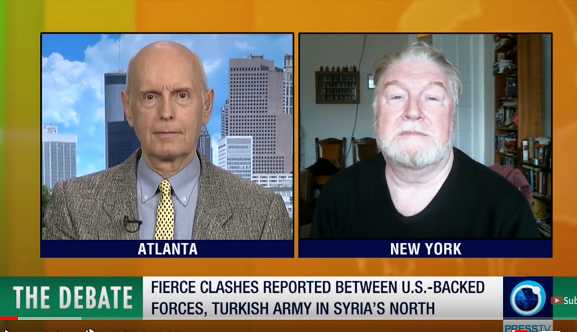 [ Editor’s Note: Turkey and the US-Kurds have the entire world focus on themselves now in the Syrian war. Even the big Idlib SAA victory took back seat to this emerging stage two attempt to Balkanize northern Syria.

The threat from the Kurds in Afrin is non-existent evidence wise, as Erdogan did not even bother to stage some bombings in Turkey to blame on them. He didn’t have to. The only entity really protesting his move is Assad, and Erdo could care less what he wants or thinks.

Erdogan did not get his “no fly zone” like the US did, so now he is playing his Kurd card, moving his army and FSA mercenaries into NW Syria to play king on the mountain, daring anyone to push him out.

He has the Russians over a barrel with the major gas pipeline deal, and got his S-400s largely on credit, which he can default on if and when he wants to. Iran has no leverage over Turkey at this point, despite their having a shotgun marriage for a while helping the Iraqis deal with their crazy Kurds.

Their leaders had robbed them blind and borrowed billions on their oil reserves. Whatever is done, Baghdad will want to continue shipping  Kurdish oil out through Turkey.

So you have to hand it to Erdogan, getting himself into the middle of everybody’s business where he can cause them more pain than they him.

When he goes to Sochi conference at the end of the month he will be on display as Mr. Wildcard at the political talks, and everyone there will know it.

The Russians are in an embarrassing diplomatic situation as they had wanted some Kurdish representation at the talks so they would have a political option other than as US puppets. Erdogan nipped that in the bud with this military move.

As Carl von Clausewitz once said, “War is the continuation of politics by other means”, and it is quite an irony that a lot of Balkanization was going on when it said that…JD ]

It is the third day of Turkey’s assault on the Kurdish-held province of Afrin in northern Syria. the Turkish president has announced the launch of the military operation dubbed ‘Olive Branch’ even though it has been opposed by Russia, Iran, Syria, and even the U.S.

In this edition of the debate, we’ll look at the real reasons Turkey is making a ground invasion, and the role that its ally the US is playing in what appears to be a double game by Washington when it comes to the Kurds.