Health Editor’s Note: As reported in Sputnik, the work of war has led to some spectacular archaeological finds.

Careful detection of land mines has led to the discovery of beautiful ancient mosaics from the Byzantine era. Antiquities experts are on the scene of these discoveries and are working to get them ready for transport to facilities for later renovation.

Mosaics are pieces of art using small pieces of colored stone, glass, or other materials such as ivory, shells, and glazed tiles. The oldest mosaics rediscovered to date are from a temple building in Mesopotamia and are dated to be from the second half of the 3rd millennium BCE.

Mosaics were often used in floors and one of the most favored subjects was mythological scenes. Daily life activities such as hunting with dogs, fishing, arts, crafts, and agriculture were also the favorite subject matter for mosaics. Below is one of the oldest mosaics from a temple in Ubaid, Mesopotamia…..Carol 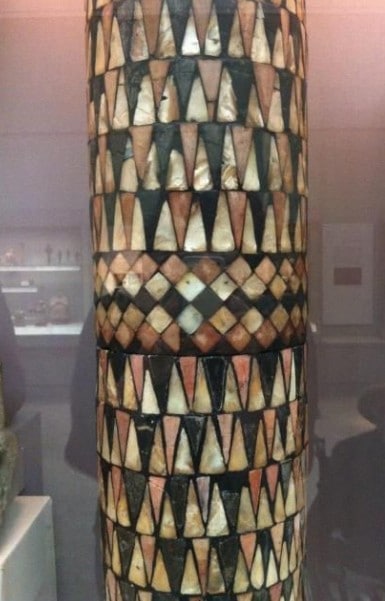 Divisions of the Syrian army have come across ancient mosaics dating back to the Byzantine era while clearing mines in a rural area around Hama.

Speaking to Sputnik Arabic, Abdel Qader Farzat, the head of Hama Museums and Antiquities Department in Hama said that “valuable artifacts have been found outside Akerbat, which lies 85 kilometers east of Hama. When the first reports from the military arrived, a group of our experts traveled to the scene and determined that the mosaic dates back to the Byzantine epoch.

It was created in the first half of the fifth century. The large-sized mosaic features birds and is covered with a 1.5-meter layer of earth.”

“As we were digging the newly found mosaic out, we spotted yet another one, just 80 centimeters away. The second one lies not that deep, it’s 7×8 meters in size. The image shows peacocks, ducks, pigeons, plants and animals, geometrical figures as well as six Greek lines. One of its sides is semi-circular, which might have housed an apsidal altar in a church,” he added.

According to the speaker, the excavation works have now entered the third week. The best specialists with the Antiquities Department are engaged in cleaning up the artifacts so that they could be transported to laboratories for renovation later on.

Once all the work is done, the objects will be put on public display, Farzat noted.

The Syrian army seized control of Akerbat on September 3, 2017.

Combat engineers have been de-mining the territory, including rural and deserted parts of the country ever since.

Only because the search for mines was so thorough was it possible to find the archaeological discovery.