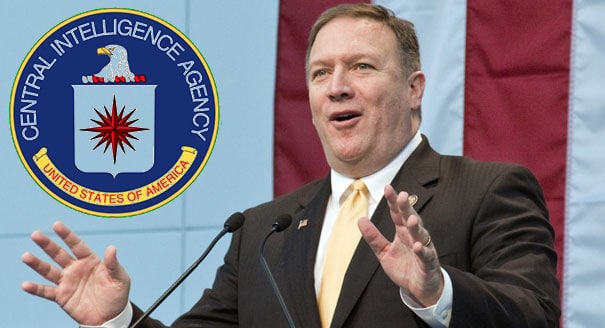 CIA Director: ‘I haven’t seen’ proof of Russian interference claims
–
…from Press TV, Tehran
–
“I think our adversaries should know this when Mike Pompeo leaves as the director of the CIA, this organization will be more vicious, more aggressive.” … Mike Pompeo
–

[ Editor’s Note: This sounds like more “my button is bigger than yours”. God help us all if Trump becomes a one liner role model. But notice how Pompeo flubbed up using the word “more” vicious, thus admitting that the US was being “vicious” to begin with. The Syrian people are intimately familiar with that.

Notice also how there is never a mention of the big question of which came first, the chicken or the egg. How much of foreign espionage is actually “aggressive”, and how much is really counter espionage, triggered by our own massive, aggressive espionage.

This pertains to cyber warfare, also. Who really started it? Who had the first real capability do to it because they led in computer science? Who never posed an international anti-cyber warfare treaty, just like no one is proposing one for Artificial Intelligence, its being weaponized into something more dangerous than nuclear weapons?

I will be the first to use the term “weapons of mass informational destruction” (WMID), as we never miss a opportunity to be wordsmiths here at VT. I put this out there today, not to engage in semantics, but as an example of an ABC intelligence analysis goal, asking the right questions… Jim W. Dean ]

[ Note from that other Editor:  Who is Mike Pompeo?  Mike is a West Point kiss ass with no experience in intelligence before being named CIA director.  He is pure “Tea Party,” a stooge of Israel, defended out of ignorance by Russian propaganda, where Press TV picked up this story.

What is not mentioned, of course, is that there is no CIA investigation nor has Pompeo reviewed any evidence.

This same story has been run month after month based on White House Press Releases engineered from the RKM lie factory at 1600 Penn St, where Trump refuses to live with a wife who won’t allow him to touch her.  I do so love a good story.

In the interim, we get more and more proof the infamous dossier is not only true but that a Russian general was murdered to cover up an especially juicy part, that Russia was going to give Trump 10b plus in Rosneft stock for aiding them with some of their other problems.

That proof is being buried by the “fake news” who are faking news FOR Trump. Instead, he is a liar, cheat and another wannabee mobster.  Gordon ]

Mike Pompeo has said he hasn’t seen any evidence of Russian interference in the US election, but that the Trump administration took the allegations very seriously.

During his first interview with CBS News at CIA headquarters, Pompeo was asked whether he had seen any evidence of collusion between members of the Trump campaign and Russian officials.

“I wasn’t on the campaign,” Pompeo replied. “I haven’t seen it.” “I can only say this: I’ve watched this administration deal with all of our adversaries in a way that has been robust. The CIA, as part of that, is doing our part,” he added.

President Donald Trump has repeatedly said that allegations of his campaign colluding with Russia were “fake news” and a “total hoax.” Most recently, he excoriated the mainstream media on his Twitter page on January 16.

“Do you notice the Fake News Mainstream Media never likes covering the great and record setting economic news, but rather talks about anything negative or that can be turned into the negative,” Trump tweeted Tuesday. “The Russian Collusion Hoax is dead, except as it pertains to the Dems. Public gets it!”

The reference to the Democratic Party presumably applies to the alleged wrongdoing on the part of Hillary Clinton in approving a uranium deal with a Russian company.

Pompeo said allegations of Russian interference in American democracy were being taken seriously, adding, “ I wish it had been taken this seriously previously.”

CBS said it was former CIA director John Brennan who reportedly alerted the FBI to contacts between Russian officials and the Trump campaign, a central focus of the ongoing investigation.

As to what steps were being taken to counter interferences in 2018 and in the next presidential election in 2020, Pompeo was somewhat vague.

“It’s a very important question. I can’t answer it,” said the spymaster. “I can only tell you this: There is a major push, not only from the CIA but all of this administration, this government, to do everything we can to prevent that from happening in 2018, in 2020, in 2030, and beyond.”

The former Republican congressman from Kansas said he was ringing the changes at the spy agency.

“We are doing things today that the CIA was not doing a year ago, and there’s more risk attached to those,”Pompeo said.

He confirmed that this meant expanding US covert and clandestine operations, as “almost certainly, I want the president to have the best intelligence in the world.”

Asked about what kind of legacy he wanted to leave, Pompeo was emphatic: “I think our adversaries should know this when Mike Pompeo leaves as the director of the CIA, this organization will be more vicious, more aggressive, more inclined to take risks to come directly at the threats that America and the world faces. If I do that I will be very proud.”