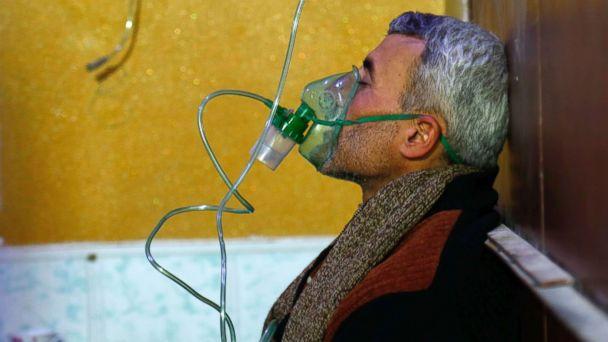 There has been another “chemical attack” in Syria, and the United States already knows who the culprit is: the Syrian government.

We are told that “the Trump administration is trying to rally international condemnation of the regime and increase pressure on Russia to rein in its ally. According to activists and rescue teams, Assad’s government launched an attack with suspected poisonous gas that affected at least 20 civilians in a rebel-held suburb near Damascus…”

State Department spokesperson Heather Nauert is mad and sad because Russia seems to be an accomplice. How? Russia, argues Nauert, is exacerbating the problem by protecting Assad. Nauert:

“Let’s be clear: Russia’s unwillingness or inability to restrain the Assad regime is costing innocent Syrian lives. We’ve been firm in our determination to hold parties accountable for the use of chemical weapons, which have killed far too many Syrians.”

In the same vein, Under Secretary of State for Public Affairs Steve Goldstein said: “Russia has failed to rid Syria of chemical weapons, and they’ve been blocking chemical weapons organizations. Enough is enough.”

This is really irresponsible. A “chemical attack” occurs, and political lizards in Washington already know who did it. It is Assad. Period. No evidence is required. No investigation. No deep thinking. Assad is responsible and that is the end of the story.

How absurd can that be? You see, Washington and the entire Zionist superstructure are collapsing when it comes to foreign policy. They cannot make a serious point, therefore they decide to repeat the same old claptrap, namely, Assad used chemical weapons again.

But it gets really funny again. On January 14th, Reuter published an article entitled: “Exclusive: Assad linked to Syrian chemical attacks for first time.” For the first time? Haven’t they been trying this worthless plan since 2013?[1] Didn’t the Neocon flagship Weekly Standard repeated the Israeli lie in 2016 that “Assad Has Used Chemical Weapons, Even After the ‘Ceasefire’ Has Begun”?[2] And if Assad is being linked to chemical weapons for the first time, doesn’t that imply that the previous manipulation was complete fabrication?

No one has been able to flesh out a serious argument because the Zionist regime doesn’t have a moral and political backbone. They keep repeating dumb arguments as if constant repetition is actually a substitute for serious evidence. I guess the Zionists themselves are doing us all a favor by getting “dumb and dumber.”