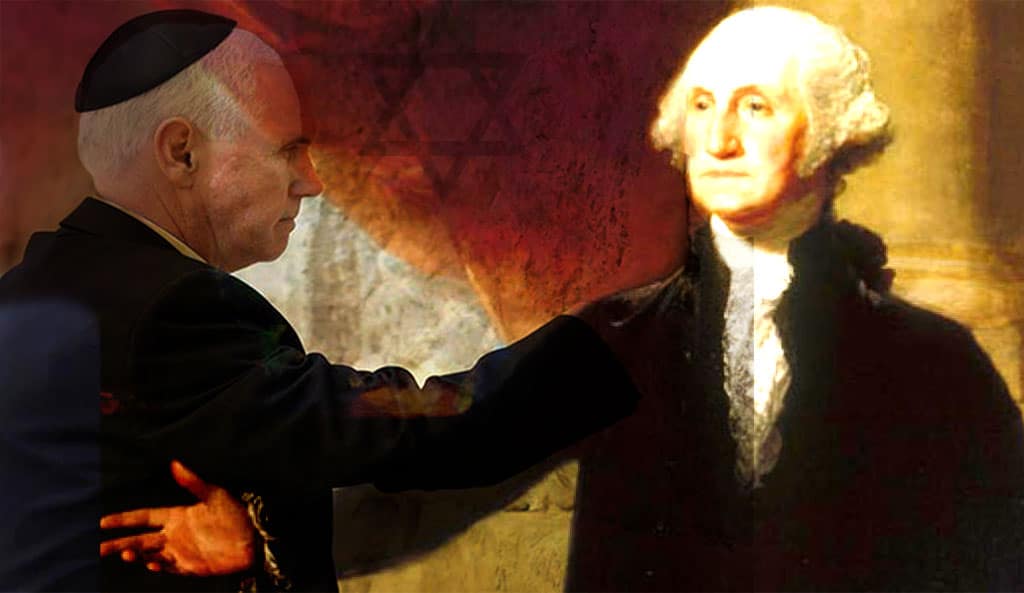 Pence is a strong member of the Christian right-wing and believes the Bible, which was written by the ancient Jews and not by God, is the Word of God. Anyone who has objectively studied the Hebrew Bible/Old Testament and the New Testament knows both “holy” books promote Israel.

For example, according to Deuteronomy 28:1 God allegedly promised the Hebrews/Jews regarding Israel, “the LORD thy God will set thee on high above all nations of the earth.” The Hebrew Bible/Old Testament is overflowing with Jewish superiority and the Israel first mentality.

In the New Testament Jesus allegedly said at John 4:22 that “salvation is of the Jews”. (For an in-depth look at how many Christians see this as showing the superiority of the Jews, click here.) On top of this, Jesus (IF he really did exist as a mere mortal) was a superstitious/religious Jew who believed the cruel and ungodly Hebrew Bible is the Word of God as is seen at Mark 7:1-13 where he is critical of the Jews for not following the Hebrew Bible command to kill children who curse their parents.

In his tirade against those Jews, at verse 13, Jesus refers to the ungodly and deadly command to kill children to be in “the word of God”. (Click here for seven Biblical reasons why Christians need to support Israel from Christian clergyman/con-man John Hagee’s Christians United For Israel site.)

In his speech to the Knesset Pence said, “America’s first President, George Washington, wrote with favor to ‘the children of the stock of Abraham.'” (In reality, George Washington held Deistic beliefs.) Pence was referring to George Washington’s letter to the Hebrew Congregation of Newport, Rhode Island on August 18, 1790. In the letter Washington wrote:

“May the Children of the Stock of Abraham, who dwell in this land, continue to merit and enjoy the good will of the other Inhabitants;”

Contrary to Pence’s description of the statement, George Washington’s statement is more conditional than favorable. He hopes that the American Jews “continue to merit the good will of the other inhabitants”. Of course, Israel did not exist in 1790.

If the Jewish state did exist at that time, George Washington would not be happy with American Jews, or with anyone, pushing the American government to blindly support Israel. This is very evident from George Washington’s statements regarding foreign influence in the American Republic which he voiced in his Farewell Address. Washington warned his listeners and future generations:

“… nothing is more essential than that permanent, inveterate antipathies against particular nations, and passionate attachments for others, should be excluded; and that, in place of them, just and amicable feelings towards all should be cultivated. The nation which indulges towards another a habitual hatred or a habitual fondness is in some degree a slave. It is a slave to its animosity or to its affection, either of which is sufficient to lead it astray from its duty and its interest. Antipathy in one nation against another disposes each more readily to offer insult and injury, to lay hold of slight causes of umbrage, and to be haughty and intractable, when accidental or trifling occasions of dispute occur. Hence, frequent collisions, obstinate, envenomed, and bloody contests. The nation, prompted by ill-will and resentment, sometimes impels to war the government, contrary to the best calculations of policy. The government sometimes participates in the national propensity, and adopts through passion what reason would reject; at other times it makes the animosity of the nation subservient to projects of hostility instigated by pride, ambition, and other sinister and pernicious motives. The peace often, sometimes perhaps the liberty, of nations, has been the victim.

So likewise, a passionate attachment of one nation for another produces a variety of evils. Sympathy for the favorite nation, facilitating the illusion of an imaginary common interest in cases where no real common interest exists, and infusing into one the enmities of the other, betrays the former into a participation in the quarrels and wars of the latter without adequate inducement or justification. It leads also to concessions to the favorite nation of privileges denied to others which is apt doubly to injure the nation making the concessions; by unnecessarily parting with what ought to have been retained, and by exciting jealousy, ill-will, and a disposition to retaliate, in the parties from whom equal privileges are withheld. And it gives to ambitious, corrupted, or deluded citizens (who devote themselves to the favorite nation), facility to betray or sacrifice the interests of their own country, without odium, sometimes even with popularity; gilding, with the appearances of a virtuous sense of obligation, a commendable deference for public opinion, or a laudable zeal for public good, the base or foolish compliance of ambition, corruption, or infatuation.”

Donald Trump, Mike Pence, John Hagee and all people who believe in showing favoritism to Israel are described accurately above by George Washington as “ambitious, corrupted, or deluded citizens (who devote themselves to the favorite nation)”. The Iraq War, which US politicians from both parties started for Israel’s benefit, proves Washington’s warning to be true. Now the US politicians are setting their sights on Israel’s other enemy, Iran, for their next religious war in which they will sacrifice American military lives and limbs and tax payer dollars to conduct.

Also in his speech to the Knesset, Pence said, “Our second President, John Adams, declared that the Jews, in his words, ‘have done more to civilize man than any other nation.’”

When we apply our innate God-given reason to this statement by John Adams, we see Adams was incorrect. The Deist Voltaire pointed this out in his short essay Adam when he wrote, in part:

“It is certain that the Jews had written and read very little; that they were profoundly ignorant of astronomy, geometry, geography, and physics; that they knew nothing of the history of other nations; and that it was only in Alexandria that they at last began to acquire some learning. Their language was a barbarous mixture of ancient Phoenician and corrupted Chaldee; it was so poor that several moods were wanting in the conjugation of their verbs.”

“Could we permit ourselves to suppose that the Almighty would
distinguish any nation of people by the name of His chosen people,
we must suppose that people to have been an example to all the rest of the world of the purest piety and humanity, and not such a nation of ruffians and cut-throats as the ancient Jews were; a people who, corrupted by and copying after such monsters and impostors as Moses and Aaron, Joshua, Samuel and David, had distinguished themselves above all others on the face of the known earth for barbarity and wickedness. If we will not stubbornly shut our eyes and steel our hearts, it is impossible not to see, in spite of all that
long-established superstition imposes upon the mind, that the
flattering appellation of His chosen people is no other than a lie
which the priests and leaders of the Jews had invented to cover the
baseness of their own characters, and which Christian priests,
sometimes as corrupt and often as cruel, have professed to believe.”

Living in a nuclear age in which we have the power to destroy ourselves, we need to pull our spiritual thinking and philosophy out of ancient times and attempt to make it equal to our scientific and technological knowledge if we are to survive. We need a revolution in religion based on our innate God-given reason and Deism.

(I want to thank people who have commented on my previous articles. Unfortunately I have trouble responding in the comments section, probably due to my browser. Thanks! Bob Johnson)