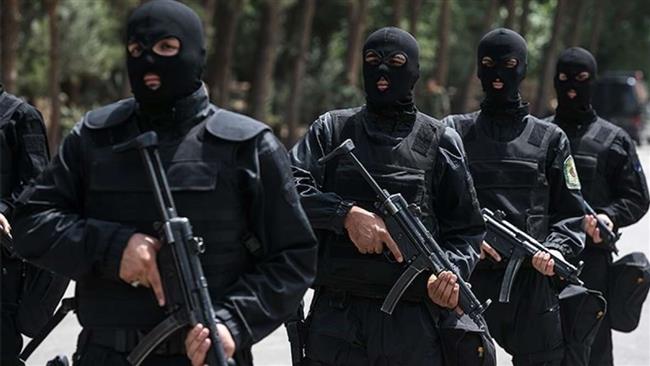 [ Editor’s Note: We were surprised when Crown Prince Salman openly stated that he was going to take his terror war inside Iran, after his ISIS and al-Nusra terror forces in Syria were being chopped up.

No matter how many times Saudi Arabia, the US and Israel tried to pin the terror tag on Iran, the world really knew who the terror proxies’ puppeteers were, and why.

The proof of that was how the EU countries flocked to do business with Iran, and would not have done so if it were true. Yes, I know, they do business with Western countries that support regime change and color revolution terror wars, but this is another article.

Unlike in the US where, to keep its high anti-terror funding, one Federal agency had to resort to creating sting operations, using criminals to seduce nitwits into terror plots the Federal operatives led them into, Iran does not resort to that pitiful tactic.

It has a steady supply of MKO Kurdish terrorists infiltrating its western border, most of whom it catches, plus US and Israeli “assets” that infiltrate in a variety of ways, as was done for the nuclear scientist assassinations.

And for the cherry on top, for the “in denial” crowd, we have the former Qatari FM and PM Hamad bin Jassim blurting out on his Charlie “the stud” Rose show that the US coalition had spent $137 billion trying to overthrow Assad and take Syria over.

US fake media and our broomstick-riding ambassador in the UN, Nikki Haley, can repeat the “Iran wants to take over the region”  mantra all she wants, as only the Koolaid drinkers will swallow it.

As for all the US security people who have watched this Iran bogeyman scam of its being the major supporter of terrorism in the region hosed on the American people, I don’t know quite what to say about them.

Are they really serving the country, or collecting the paychecks and benefits like the ISIS and Al-Qaeda jihadis do? The answer to that would be no, but with the qualification that it is similar.

Like the moderate Muslims charge the jihadis with using the religion as a cover for their gangsterism and terrorism, Americans can fairly accuse many of our own contractors of using the War on Terror scam to participate in a War of Terror, and one that pays very well.

They will have to live with that, and they will get no honors from VT… Jim W. Dean ]

Iran has captured two large caches of explosives and powerful bombs that were supposed to be detonated in populated areas as part of two terrorist plots, one of them directly designed and led by Saudi Arabia.

The Iranian Intelligence Ministry said in a Wednesday statement that in one operation, security forces discovered no less than 23 remote controlled bombs that terrorists were going to use in order to wreak havoc in the eastern parts of the country.

Terrorists had managed to carry the bombs over Iran’s eastern borders and sneak them into the country using help from Saudi intelligence agencies, according to the statement.

The ministry said another shipment of explosives complete with bomb-making equipment were seized from a terrorist group in the western province of Kordestan. The materials, captured from a “separatist” militant group in the border town of Mariwan, included military-grade material such as TNT, C4, explosive kits and electronic charges.

The statement did not reveal further details about the identities of the terrorists or their possible targets. Saudi officials have on several occasions made open calls for instability in Iran.

Hours before a series of terrorist acts that killed and injured several people in Tehran last June, Saudi Foreign Minister Adel al-Jubeir said, “Iran must be punished for its interference in the region.”

The Daesh Takfiri terrorist group claimed responsibility for the near-simultaneous assaults at Iran’s Parliament (Majlis) and the Mausoleum of the late Founder of the Islamic Republic Imam Khomeini.

A month before that, then-Saudi Deputy Crown Prince and Defense Minister Mohammed bin Salman said in a televised interview with Arabic-language Al-Manar TV, “We will work to have the battle in Iran rather than in Saudi Arabia.”

This is while Takfirism, a trademark of terrorist groups such as Daesh, is largely influenced by Wahhabism, the radical ideology that dominates Saudi Arabia and is freely preached by Saudi clerics.