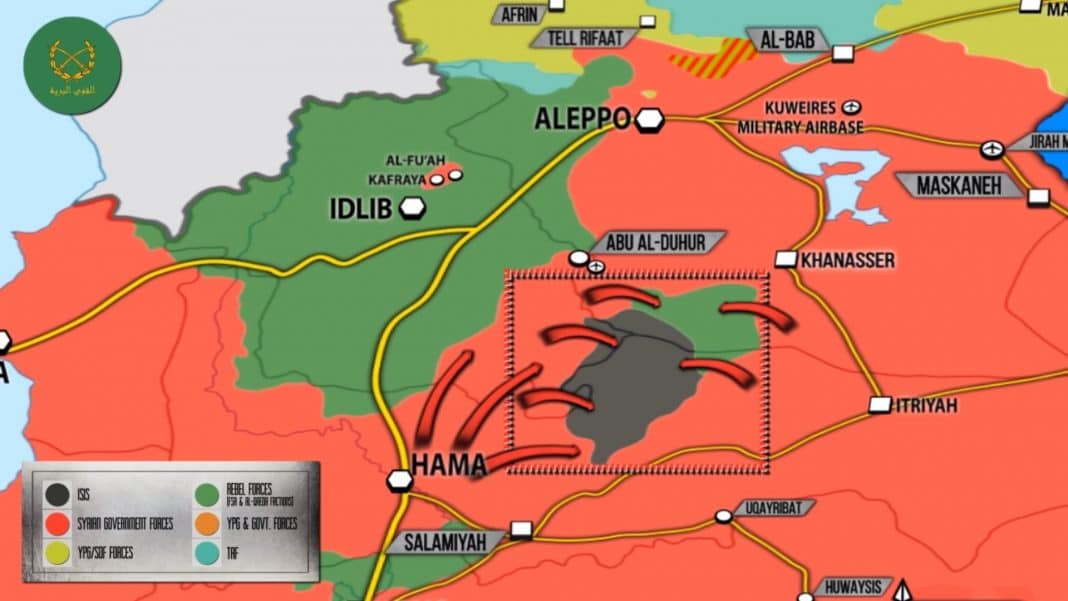 The Syrian military is deploying reinforcements to northern Hama and eastern Idlib reportedly preparing to launch a military operation to clear the militant-held pocket there. According to pro-government sources, additional units of Liwa al-Quds and the Qalamoun Shield Forces have already been deployed there.

The liberation of the pocket will allow the Syrian Arab Army (SAA) and its allies to eliminate the ISIS threat in the area and to free additional resources for possible future operations in Idlib.

Kurdish YPG/YPJ forces have repelled another attack of the Turkish Armed Forces (TAF) and the Turkish-backed Free Syrian Army on Birsaya Mount but lost the village of Abudan.

The YPG denounced a report by the Turkish General Staff that at least 260 Kurdish fighters have been killed as a result of Ankara’s Operation Olive Branch and in turn claimed that 260 members of pro-Turkish forces, including tens of TAF soldiers, have been killed. The numbers provided by the both sides are clearly overestimated.

The YPG also rejected reports that it had reached an agreement with the SAA that will allow government forces to enter Afrin helping the YPG to repel the Turkish advance.

On January 24, a TAF military convoy reportedly entered Syria via the Atma station and reached the village of Tellet el-Is and the nearby hill in the province of Aleppo. The formal purpose of the move is to establish an observation point in the area under the de-escalation zone agreement reached during the Astana talks. Some sources speculate that this force may participate in the advance on Afrin.

On the same day, the US-backed Syrian Democratic Forces (SDF) captured the town of Gharanij from ISIS in the province of Deir Ezzor. ISIS reportedly lost 7 fighters, a vehicle and a bulldozer in the clashes there.

Clashes between the SDF and ISIS were also reported near al-Shaafah and Hajin where four SDF armoured vehicles were destroyed, according to the ISIS-linked news agency Amaq.

The US-led coalition also claimed that its airstrikes killed 140-150 ISIS members near al-Shaafah on January 20.