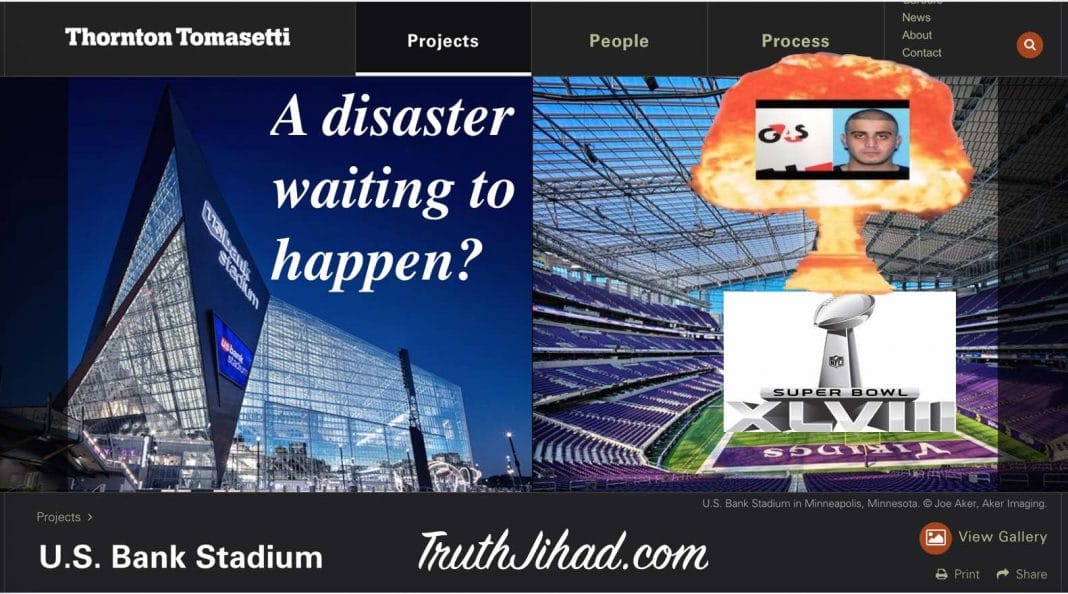 Everything is lining up “false flag” for this year’s Super Bowl.

I reported last October that US Bank Stadium suddenly fired its security provider and replaced it with G4S, the notorious “black ops CIA” outfit formerly known as Wackenhut. G4S is the company that employed Omar Mateen, the gay patsy blamed for the Orlando nightclub shooting. (For the unbelievable details of Mateen’s career as a G4S-orchestrated flaming patsy, check out the investigations of former CIA Officer Robert David Steele and others in my edited book Orlando False Flag.)  Rumors have also linked G4S to the Las Vegas shooting and other suspected false flags.

How many fake “radical Muslim” patsies is G4S running in the huge Somali community of the Twin Cities? Will one of them be blamed for doing something crazy to the Super Bowl?

Another warning sign: The company that engineered US Bank Stadium is into “disaster response.” 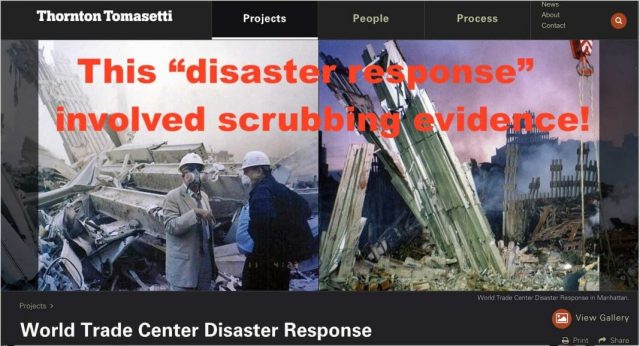 “SMG, which runs venue management for US Bank Stadium, also manages events at Manchester Arena, the site of the Ariana Grande concert “bombing” on May 22. SMG’s clients may be found on their website. ”  –source

And on the symbolic/numerological side, note that the capacity at US Bank Stadium is 66,655.  For why that may be significant, check out my article “11 Examples of Illuminati Numerology.”

Coincidentally (?) the two teams playing in this Super Bowl just happen to be named after the two leading symbols of jingoistic American militarism. The term “Patriots,” which originally referred to heroic warriors against empire, has been hijacked by false flaggers, giving us such abominations as the “Patriot Act” (most Orwellian expression ever?) and the 9/11 holiday “Patriot Day” (a more appropriate name would be “Treason Day.”) And the Eagle, of course, is our national raptor, symbolizing America’s fetish for swooping down on smaller, helpless countries and ripping them apart.

The timing is worrisome: Donald Trump appears to be on the ropes, vulnerable to a potential knockout punch from Mueller and his allies, as discussed in my recent interview with former Presidential Policy Advisor Barbara Honegger. The latest news – that Trump tried to fire Mueller last summer but was unable to do so – seems to be part of an escalating onslaught that could put Trump in a position to think that the only thing that will save his presidency would be a major false flag. Check out this piece from Raw Story:

Trump has built his political career on Islamophobia, rabid nationalism, macho bluster…and, in recent months, nuclear brinksmanship. The best thing that could possibly happen to his presidency, maybe the only thing that can save his presidency, would be a huge false flag blamed on Muslims.  If it’s big enough, he’ll be in a position to grab quasi-dictatorial powers and put an end to the assaults on his sensitive, narcissistic ego.

Presidents don’t orchestrate false flags. They probably don’t even directly order them. But the people who do orchestrate the false flags – moles and professional killers, according to Tarpley – usually stage them to benefit the sitting president, while also achieving their own policy objectives.

Example #1: The Deep State actors who blew up the Murrah Building in Oklahoma City succeeded in their major objectives of massively increasing the anti-terror budget, rolling back civil liberties, and conducting a dry run “blow up a building and preposterously blame it on something that couldn’t possibly have done it” in preparation for 9/11. They failed in their other major policy objective, “blame it on Iraqis and force Clinton to accept Team B’s plan to invade Iraq.”  But they also made sure it benefitted Clinton, by destroying evidence of Clinton-CIA corruption, and (as a fallback from the attempt to blame Iraqis) blaming right-wingers, Clinton’s political enemies.

Example #2: 9/11 achieved the same policy objectives, including the one where OKC failed: Pushing the US into invading Iraq on behalf of Israel. But it also benefitted Bush politically, catapulting his miserable approval ratings to over 90%.

Example #3: The phony “assassination of Osama Bin Laden” by Seal Team 6. This operation was central to the “theater of terror” and marked a symbolic “enemy shift” from “al-Qaeda” to “ISIS.” But it also was designed and timed to benefit Obama politically, essentially handing him the 2012 election.

So let’s assume today’s Deep State actors – basically the same folks who ran the three operations listed above – want to keep increasing military and spy budgets, centralizing authoritarian power, and projecting that power against Israel’s enemies and to some extent America’s rising rivals. (They may even want to pre-empt the rise of Russia and China by fighting World War 3 ASAP, while they think they can still win.) A big false flag that saves Trump and makes him essentially a war president AKA dictator could fit the bill.

The Super Bowl is the quintessential spectacle of a society ever-more-given to artifice and illusion. And it is a spectacle of violence: football is symbolic war. 100 million TVs will tune in. It must represent a tremendous temptation to the people who orchestrate false flags.

So will it happen this year? I certainly hope not. But as a precaution, I would recommend staying away from US Bank Stadium—and spreading this article far and wide, in hopes of pre-empting any possible dark designs.

UPDATE: This just in from a trusted Twin Cities source: Netanyahu threatened Minnesota with a huge terror attack!

In his September 22, 2016 speech to the UN, Netanyahu said: “The bloody trail of this fanaticism runs through all the continents represented here. It runs through Paris and Nice, Brussels and Baghdad, Tel Aviv and Jerusalem, Minnesota and New York, from Sydney to San Bernardino.”  Wait a minute, Bibi! MINNESOTA?! Nothing big, terror-wise, has EVER happened in Minnesota! So why was Bibi threatening Minnesota? (Note that he repeatedly threatened France during the run-up to the January 2016 Paris attacks, as documented in We Are NOT Charlie Hebdo.) My extremely well-placed Twin Cities, Mark Novitsky, source just emailed VT:

“Now you know just how much they LOVE numbers…  the “Suspect” 2016 UN Tongue Lashing / Reprimand Netnayahu barked a the UN “The United Nations is a moral farce…” was Sept. 22, 2016 –  a hint that an attack twice as big as 9-11 (11×2=22) may be coming…then for some reason he mentions “Minnesota” comparing us to NYC, London, Paris, Brussels, San Bernadino…. all that suffered HORRIFIC attacks (G4S) ….could have mentioned Boston, Orlando… then we have had Vegas. But WHY “Minnesota”- where did that come from? The only events we have had here is after a cop shoots a civilian. And of course Minneapolis has a huge number of Somalis / possible / likely scapegoats…given the Immigration issues all over the news… Now…I have warned many… I would rather be called a “conspiracy theorist / chicken little” but being called a fool if nothing happens is a FAR better alternative if the QUI BONO / USUAL SUSPECTS crowd tries to pull another fast one. I will NOT be in the Twin Cities this weekend… they would love a two-fer. – Also SUPER BLUE BLOOD MOON this week! (Ironic “Blue Blood”) – Lastly SNL skit Will Ferrell playing W. Bush at open “Who has two thumbs and created ISIS? – THIS GUY!” / “Don’t forget we’re still in two different Wars that I started” – I guess making jokes about that now is OK…  Peace. Mark J. Novitsky “   finance.yahoo.com/mb/TTEC   https://www.algemeiner.com/2016/09/22/full-transcript-of-prime-minister-netanyahus-address-to-the-2016-united-nations-general-assembly/

Update to the Update:  This just in – Bibi has an alibi this time!

“Kevin – after listening to your Podcast with Mark Novitsky, I had the exchange below with my brother, where he uncovered an attack in Minnesota five days before Netanyahu’s speech to UN.
There can be little doubt that Netanyahu’s reference to Minnesota would be attributed to that attack, which presumably made the news coverage at that time.
Naturally the Super Bowl is always a candidate for an attack, but under the circumstances … I don’t think Netanyahu’s 2016 speech can be seen as his forecasting it for the SB in 2018.
Thought you’d want to know this.  Again, the link to story is:
https://en.wikipedia.org/wiki/St._Cloud,_Minnesota_mall_stabbing
Keep up your good work and the good fight!”