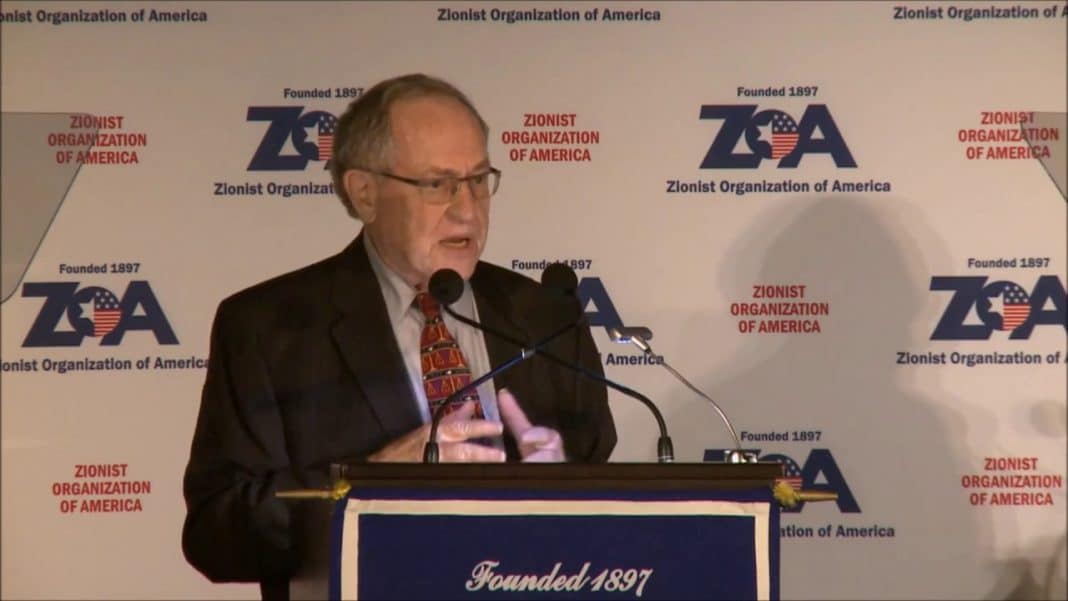 As Jim W. Dean would have put it, you simply can’t make this stuff up. Alan Dershowitz wrote a small book last year entitled, Trumped Up: How Criminalization of Political Differences Endangers Democracy, and he dedicated it to;

“the shrinking number of true civil libertarians who place more importance on the rights and liberties of all Americans than on the partisan benefits of distorting the law to target political parties.”

Dershowitz moved on to say that “I see my role as defending civil liberties as I have done throughout my life.”[1]

This is what one ought to call window dressing, and Dershowitz should be ashamed of himself for writing that statement. Why?

Well, Dershowitz has spent almost his entire “academic” career criminalizing political differences which endanger his worldview. He seems to have forgotten the debate he had with Norman Finkelstein back in 2005, which literally exposed Dershowitz as an academic fraud and charlatan.

Shortly after the debate, Finkelstein signed a contract with the University of California to expand on some of the issues he mentioned during the debate. Dershowitz, the guy who is now pretentiously postulating that criminalizing political differences is dangerous to democracy, went berserk.

Finkelstein had taught at prestigious universities such as State University of New York, Rutgers University, and New York University, but when it was time for him to gain tenure at DePaul University, Dershowitz went on a campaign to force the university to deny Finkelstein tenure, even sending “a dossier of Norman Finkelstein’s most egregious academic sins.”[2] The university eventually succumbed to the campaign against Finkelstein, though it admitted in an official statement that Finkelstein is “a prolific scholar and outstanding teacher.”[3]

So if Finkelstein’s academic studies are impeccable, if he is an outstanding teacher, what caused the university to essentially fire him? The simple answer is that thought-police Dershowitz played a major role. An article in the Harvard Crimson declared,

“Dershowitz confirmed that he had sent a letter last September to DePaul faculty members lobbying against Finkelstein’s tenure. The letter, which Dershowitz said contained ‘self-proving information,’ referenced dozens of alleged instances in which Finkelstein had made up quotations of Dershowitz, the Israeli Supreme Court, and others.”[4]

Dershowitz was so crazy that he “asked California Governor Arnold Schwarzenegger to intervene in order to prevent the University of California Press from publishing the book [Beyond Chutzpah]. Schwarzenegger’s legal advisor responded, however, that the governor would not intervene in issues of academic freedom.”

Later, DePaul University declared that Finkelstein did not get tenure because of his lack of scholarship, but because of his demeaning attacks on important public figures like Dershowitz and author Elie Wiesel.

This raises several important issues. Should universities base their hiring criteria on rational discourse or on pressure from lobbyists? It is really a shame that any university would discuss internal issues with people on the outside who don’t have a say. Dershowitz was at Harvard, so how did he get involved in an internal matter at DePaul?

Also, in his works Finkelstein presses Dershowitz and others to provide evidence for their claims. If they cannot back up their assertions, then it is fair to call their works historically false…right? Should we let falsehood reign in academia because we want to propagate misinformation under the banner of “diversity”?

And speaking of “diversity,” why couldn’t Dershowitz and the Jewish establishment allow some real diversity by allowing the university to make their own decision about Finkelstein’s tenure?

Finkelstein’s departure from popular academic ideology started during his Ph.D. program when he first stumbled on Joan Peters’s book From Time Immemorial: The Origins of the Arab-Jewish Conflict over Palestine. The book was endorsed by Saul Bellow, Barbara Tuchman, Daniel Pipes, and other Jewish luminaries and historians such as Lucy Dawidowicz.[5]

Dawidowicz herself praised Peters for having “dug beneath a half-century’s accumulation of propaganda and brought into the light the historical truth about the Middle East.”[6] These are nice accolades, but they are completely vacuous. Finkelstein took Peters’s claims to task and examined the historical documentation behind her citations. His findings were quite shocking:

“It quickly became obvious that Joan Peters had concocted—and, more revealingly, that the American intellectual establishment had lent its name to—a threadbare hoax. As it happened, documenting the fraud…proved by far the easiest task as compared to publicizing my findings.”[7]

As Finkelstein goes on to say in Beyond Chutzpah, Peters’s book “From Time Immemorial was a colossal hoax. Cited sources were mangled, key numbers in the demographic study falsified, and large swaths plagiarized from Zionist propaganda tracts. Documenting the hoax and the rather more onerous challenge of publicizing these findings in the media proved to be a turning point for me.”[8]

The frauds were so obvious that Avishai Margalit, chair of the philosophy department at Hebrew University, declared that From Time Immemorial is a “web of deceit.”[9]

Peters’s footnotes, as Finkelstein documents, argue against what Peters set out to prove; he also proves that she concocted non-existent evidence to support her thesis.[10] At one point, Peters argues that the Hope Simpson Report, one of her sources, says that “some 300,000 unrecorded Arabs had entered and settled in Palestine.”[11]

But Finkelstein noted that “the only policy statement in the Hope Simpson Report pertinent to her thesis reads: illegal immigrants should ‘at once [be] returned to the country whence they came.”[12]

From Time Immemorial reached the peak of its popularity in the United States in 1984, and no major newspapers and periodicals—including The New Republic, Atlantic, Commentary, The Village Voice, Dissent, and The New York Review of Books—which praised the book as a historical breakthrough, wanted “to run any critical correspondence” of the work. It also received all kinds of awards, including the prestigious National Jewish Book Award.[13]

But when the news spread that it was a fabrication, British historians and writers got angry. Albert Hourani of Oxford denounced the book as “ludicrous and worthless” and called it a “grotesque work,” adding that the sources “proved to be wrong in one way or another.” David Gilmour of the London Review of Books, along with The Spectator of London and Time Out, also began to call it out for its completely historical inaccuracies.

Finkelstein accused Dershowitz of plagiarism, lifting quotes from Peters’ book without proper citations. Dershowitz obviously did not like that. He even accused Finkelstein of anti-Semitism, despite the fact that Finkelstein’s relatives died during Nazi Germany!

Dershowitz was asked by British television reporter Riz Khan to appear with Finkelstein in an interview. Dershowitz declined, saying, “I will not be on your show with anti-Semites.”[14] He repeats the accusation in his new book, declaring that people like Finkelstein “have proved [that] even a Jew can be anti-Semite.”[15] He was even less subtle in a 2009 interview:

“Norman Finkelstein is a sick and deeply disturbed, self-hating Jew, who in his autobiography implied that his own mother was a kappo. He constantly compares Israel to the Nazis (though he seems to admire the Nazis and to despise Israel). He constantly invokes anti-Semitic stereotypes of the kind that were found in Der Stutterer. He is beneath contempt and deserves no further comment. He should be relegated to the dustbin of history and ignored.”[16]

This is the kind of “academic” studies we are dealing with. And this is the man who is now risibly positing that the criminalization of political differences endangers democracy.