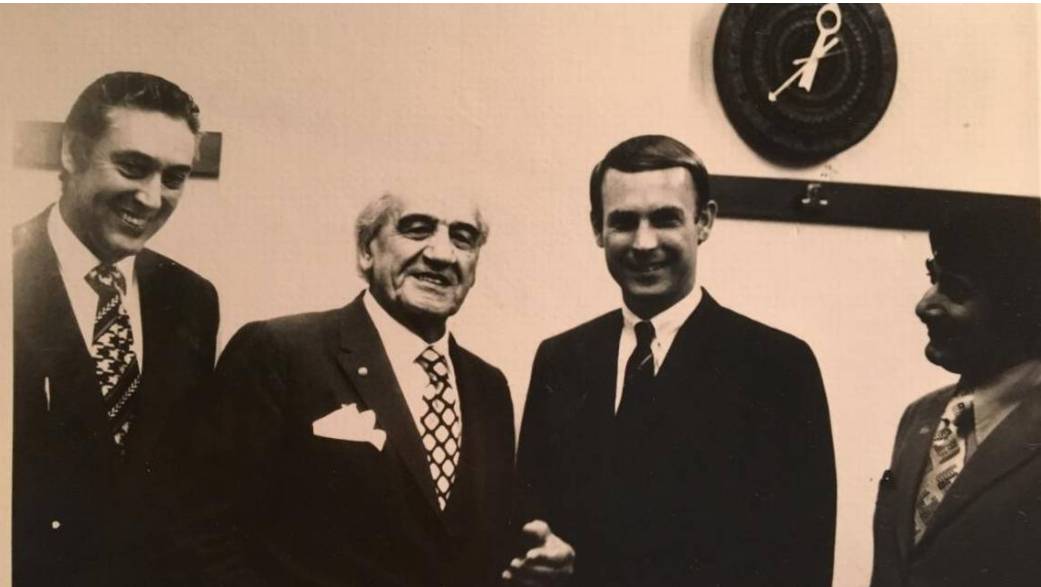 Twice each year, my thoughts turn to the Armenian Genocide. On April 24, the anniversary date of the 1915 massacres orchestrated by the Turkish government. And on Jan. 27, when 45 years ago Gourgen Yanikian assassinated two Turkish diplomats in Santa Barbara to avenge the genocide.

Yanikian’s purpose was to create an “Armenian Nuremberg” – a show trial to call world attention to the genocide, as the Nuremberg trial had done with Nazi war crimes. And perhaps to be acquitted. Yanikian’s hope was not unreasonable.

In 1921, a German jury had acquitted Soghoman Tehlirian of murdering Talaat Pasha, the Turkish official most responsible for the genocide. Tehlirian later settled in Fresno, and his tomb is the centerpiece of Fresno’s Masis Ararat Cemetery.

Talaat had been sentenced in absentia to death for “crimes against humanity,” and had fled to Germany. Tehlirian found Talaat and shot him to death on a Berlin street. As planned, Tehlirian pled not guilty, and his trial was reported worldwide.

‘They Simply Had to Let Him Go’

Tehlirian testified about the rape and murder of his sisters, the beheading of his mother, and the killings of his brothers. It took a jury less than two hours to find Tehlirian not guilty. The New York Times headline read, “They Simply Had To Let Him Go.”

Fifty-two years later, in a Santa Barbara courtroom, Yanikian sought his “Armenian Nuremberg,” and an acquittal. As prosecutor, it was my duty to convict him.

The trial proceeded without personal rancor. I have a photograph of Yanikian, his attorneys and me, standing together, smiling, during a court recess. And another, with the inscription “to our admired and respected District Attorney and friend.”

Yanikian’s attorneys told the judge they wanted to call as witnesses eminent historians and elderly Armenians who had survived the genocide. And survivors were available. Bused daily from Southern California, they sat silently in the courtroom among family members, ready to recount unspeakable horrors.

One of Yanikian’s attorneys, Vasken Minasian, asked me to allow the testimony. He gave me a copy of “The Cross and the Crescent,” about the Tehlirian trial. In it he wrote: “The tragedy in Santa Barbara has brought destiny and God to your doorstep,” and he urged me to “bring forth an indictment against genocide.” He added, “You stand to become an immortal symbol of justice around the world.”

This was heady stuff, and I faced a dilemma: to allow a parade of eye-witnesses to the genocide, risking an acquittal, or to block the evidence to obtain a conviction. I knew such evidence would likely lead to “jury nullification,” where a jury disregards the law and acquits for a perceived greater justice, as the Tehlirian jury had done.

I took the safer path, and the judge sustained my objection to the witnesses. But I could not in good conscience block the testimony of Yanikian himself, no matter how it inflamed the jury. He commanded the witness stand for six days and described in detail, without objection, the Armenian genocide.

Yanikian told how, as a boy of 8, he watched marauding Turks slit his brother’s throat, and of the slaughter of 26 other family members. He testified in Armenian, translated by Aram Saroyan, former Fresno grape shipper, San Francisco attorney, and uncle of author William Saroyan.

Jurors were moved to tears by Yanikian’s testimony, but they were denied the corroborating testimony the defense hoped would sway their decision. The Yanikian jury, unlike the Tehlirian jury, followed the law and gave me what I asked: two first-degree murder verdicts.

There would be no nullification. Yanikian was sentenced to life in prison. He was granted compassionate release to a care home in 1984, over objection of the Turkish government, and died of cancer two months later.

Yanikian failed to get his Armenian Nuremberg, and “The Forgotten Genocide,” denied to this day by the Turkish government, was never proved in a court of law by the testimony of eyewitness survivors.

Looking back, I regret I hadn’t the courage to allow such evidence, and trust the jury to follow the law. And attorney Minasian’s words still haunt me: “… bring forth an indictment against genocide.” History’s darkest chapters – its genocides – should be fully exposed, so their horrors are less likely to be repeated.

Notwithstanding Turkish denials, the historical evidence of the Armenian genocide is so abundant that 48 American states, and at least 25 nations, have memorialized and condemned it.

Not so the American government. For years, Congressional Resolutions condemning the genocide have been defeated after intense pressure from Turkey, where American military bases exist at Turkish pleasure.

Passage of the current version, House Resolution 220, “would be a critical step towards ensuring an event like the Armenian genocide never takes place again,” says Hanford Congressman David Valadao, a co-sponsor.

But H.R. 220 has languished in the Foreign Affairs Committee for 10 months, and chances for passage are remote. The House will doubtless take the safer path, as I did in the Yanikian trial.

And once again, truth will fall victim to expedience.

David Minier of Fresno is a former district attorney of both Madera and Santa Barbara counties, and a retired Superior Court judge who sits frequently by assignment in Valley courtrooms.