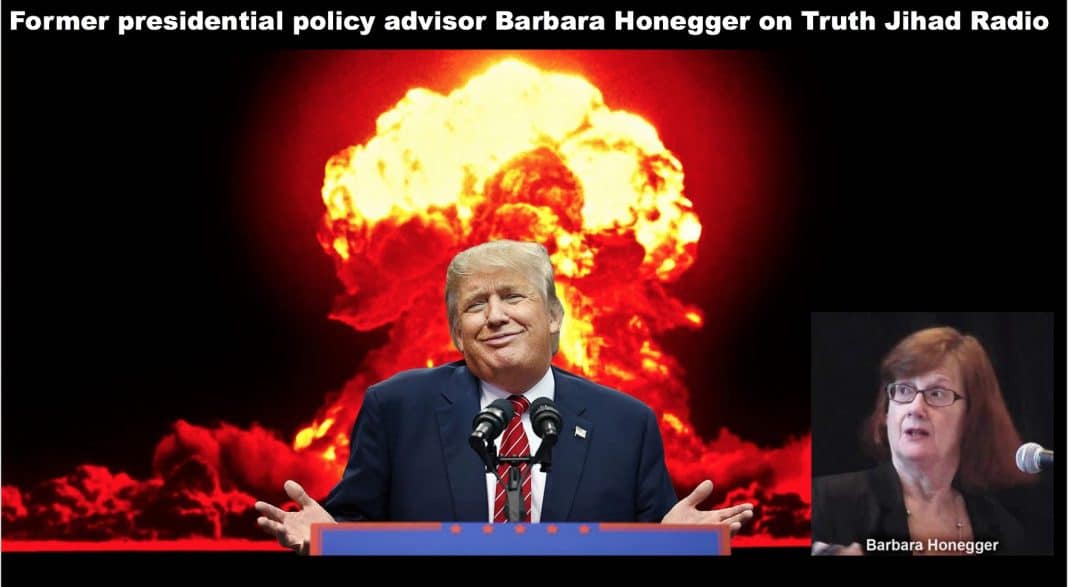 Get all my radio shows  before the rest of the world! Subscribe to https://www.patreon.com/DrKevinBarrett

Former presidential policy advisor Barbara Honegger joins us to discuss the likelihood of nuclear war. (US command and control systems are still crazy – for detail see Daniel Ellsberg’s new book The Doomsday Machine.) She also breaks the news of the existence of a 2nd Trump-Russia dossier, compiled for Steve Bannon during the primaries when Bannon was working for Ted Cruz, focusing on Trump’s ties to the Russian mob. Barbara has made sure that Robert Mueller knows about it! Towards the end of the show, she breaks the news that the Lawyers Committee for 9/11 Inquiry will be holding a press conference in New York soon to announce its filing of a Grand Jury Petition to re-open 9/11. The Press Conference will be on the front steps of the federal courthouse in Federal Square, NYC—double-check with the Lawyers Committee website to verify the time and location.

Note: The Jan. 31 date has been postponed! Check the Lawyers Committee website for the new date!

And speaking of 9/11 and New York, we finish the show with a discussion of the recent New York Times story by Max Fischer on research showing that 9/11 turned American conservatives into Muslim-hating, Palestinian-hating dupes of Israel…it all “became the basis of a culture war that largely by chance (emphasis mine -KB) aligned almost perfectly with a real conflict just then unfolding between Israelis and Palestinians” according to Fischer. WHAT a coincidence!!

Barbara Honegger is a leading researcher, author and public speaker on the 9/11 Pentagon attack and the anthrax attacks.

She has served in high-level positions in the U.S. Federal Government, including White House Policy A

Her pioneering book October Surprise, on the deep story behind the Iran side of the Iran/Contra scandal, now confirmed by formerly classified documents, led to a full-subpoena-power U.S. Congressional investigation.

From 2000 to 2011, Ms. Honegger served as Senior Military Affairs Journalist at the Naval Postgraduate School, the premiere science, technology and national security affairs graduate research university of the U.S. Department of Defense. She was the only invited researcher to testify at both the historic Toronto 9/11 Hearings on the 10th Anniversary of 9/11 and the follow-on Vancouver Hearings six months later. She is one of 50 founding current and former high-level government, military and intelligence officials to call for a new 9/11 investigation at PatriotsQuestion911.com, and one of 20 charter members of Political Leaders for 9/11 Truth.

Ms. Honegger has a Bachelor of Arts (B.A.) degree from Stanford University; a Master of Science (M.S.) degree in Experimental Psychology from John F. Kennedy University; and Masters level certification in National Security Decision-making from the Naval War College, all in the U.S.

Re:  Critical Information for your Subpoena of Bannon

This opposition research, on behalf of the Mercers’ then-chosen candidate Ted Cruz, began “later in 2015”. Please demand a copy of this ‘earlier’ Trump-   Russia dossier, which Bannon almost certainly has or can obtain access to,         and compare its contents with the work product that Fusion GPS did for the Washington Beacon, and also with the content of the Fusion GPS Steele dossier.  Though Fusion GPS didn’t hire Steele until the Summer of 2016,

its first client for the Trump opposition research, the Washington Free Beacon, hired Fusion in Sept. 2015, which would qualify as ‘later in 2015’ — i.e. the Mercer/Bannon dossier may be related to, or may even be one and the same as, the Beacon/Fusion GPS dossier and be a cover for it.  Don’t buy the claim in     the above referenced NYTimes article that Bannon ‘had nothing to do with           the Government Accountability Institute’s Trump-Russia dossier research — he headed the organization at the time; and in addition, the Mercer/Bannon project was, the Institute told the NYTimes, all ‘public information documents’ research, which is also the main specialty of Fusion GPS.  The ‘later in 2015’ Mercer/Bannon dossier is almost certainly why Bannon knows so much about Trump’s organized crime and money laundering ties that he spilled just the           tip of the iceberg about to ‘Fire and Fury’ author Wolff.

Also, the 300-plus-page transcript of the Senate Judiciary Committee’s interview with Fusion GPS co-founder Glenn Simpson points to the almost certain likelihood that the c. 35-page Trump-Russia dossier composed     of memos researched and provided to Fusion GPS by Christopher Steele

is not the entire dossier:  the separate memos that comprise the dossier are sequentially numbered, and the first memo that Simpson testified he received from Steele is Company Intelligence Report 2016/080, however the next-numbered memo is 2016/086, which Simpson testified was the next/second one he received (see p. 140 of the transcript).  This is almost certainly not a numbering error; i.e. either there are five missing memos, between the             first and second memos Simpson received, that were withheld from him               by Steele; or Simpson misled the Committee when he claimed there were         no memos (that he received) between 080 and 086 and that, by inference,

the numbering was therefore just an error.  If you haven’t already,

Mr. Steele should be asked for the five missing memos. 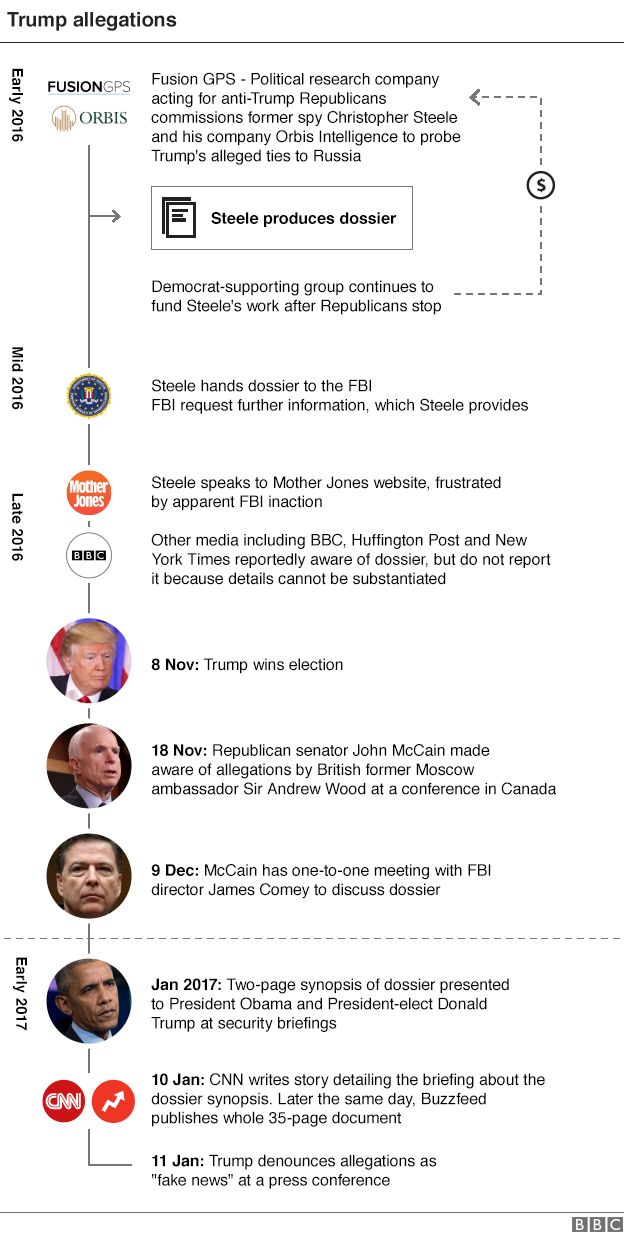 Above: Timeline of Trump allegations (minus the 2nd dossier) courtesy of BBC.