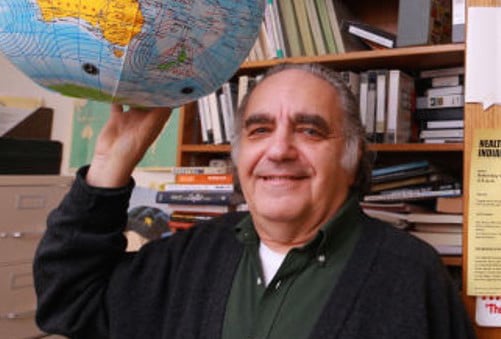 Thorne Dreyer‘s guest on Rag Radio is author and political scientist Harry Targ. Taking from MLK’s “Three Evils: Poverty, Racism, and Militarism,” Harry talks about new social movements and the need to organize around social and economic justice at home and against war overseas.

Targ discusses the convergence of Sen. Bernie Sanders and the Rev. William Barber in an upcoming “public conversation” — and their respective movements: Our Revolution and the New Poor People’s Campaign (growing out of Moral Mondays). We also discuss the U.S. as a declining empire and the added danger of nuclear weapons in the mix. Also: the military/industrial complex and mobilizing around economic conversion if we cut military spending.

Harry Targ is a Professor of Political Science at Purdue University. He is the Coordinator of Purdue’s Committee on Peace Studies. He has published books and articles on U.S. foreign policy, international relations, neoliberal globalization, Cuba and Nicaragua, and labor, and co-authored and edited books on international political economy, plant closings, and world order studies. His most recent articles appeared on line in Jacobin magazine on neoliberalism in higher education and in Monthly Review on Cold War scholarship on international relations. He currently is a national co-chair of the Committees of Correspondence for Democracy and Socialism (CCDS), blogs at the Diary of a Heartland Radical, and participates in labor and peace and justice movements in Indiana. Some of his blog essays have appeared in The Rag Blog and this is the second time Harry has been our guest on Rag Radio.