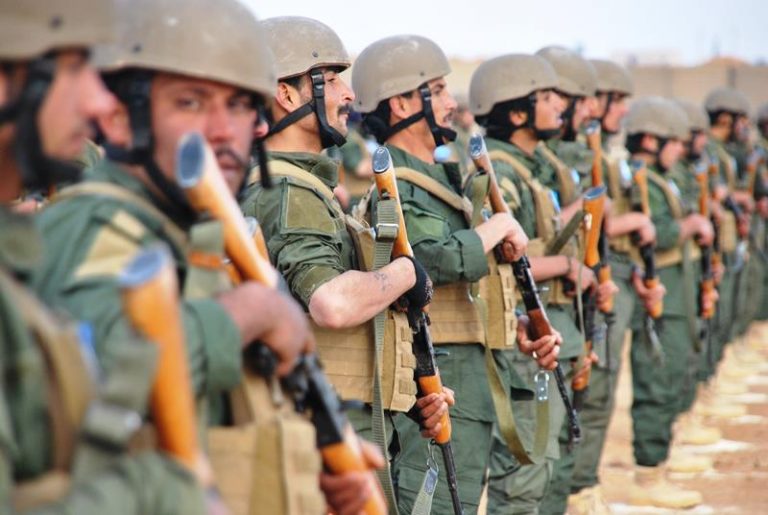 [ Editor’s Note: Turkey demands US withdraw from Manbij and stop arming Kurds, which the story below claims General McMaster agreed to. If that is true Turkey has won the war.

I am still suspicious that this spat with the US and Turkey might be fake, a smokescreen to divert attention from what they both are doing, Balkanizing Syria.

The main point is not whether US or Turkey controls the Kurds, but that Damascus does not. Starving Kurds will be easy to make a deal with to put a Saudi oil pipeline through to the Med, with the last leg through Turkey to the coast.

The Kurdish region has no economy due to the current state of affairs, so the they are totally dependent on outside sponsors. They can’t really say no to anything. The US can even use Assad as a bogeyman as in, “If you don’t do as we say we will boogie out and leave you to fight the SAA by yourself”.

McMaster’s agreeing to not giving the YPG more weapons can be gotten around. They already have all the weapons they need, and McMaster did not say “weapons, ammo, and military supplies. The Saudis can easily step in to supply more weapons, or the CIA.

The Turkish-Merc FSA advance is proceeding very slowly, despite all of its air and artillery power, against a widely dispersed YPG. Erdogan seems deathly afraid of Turkish casualties. But why, if it is really a terror war against a lightly armed adversary, why is Turkey with its huge army not on the constant attack to roll the Kurds over?

My guess is that the slow motion is on purpose, so there is more time to talk, to see what happens next week in Sochi, and if the SAA can continue its advance in Idlib. It is all a game now of who has the momentum brings to the negotiation table… Jim W. Dean ]

Turkish Foreign Minister Mevlut Cavusoglu says US military forces need to immediately withdraw from Syria’s northern region of Manbij as Turkish troops are engaged in an operation in the Arab country’s Afrin region against militants from the Kurdish People’s Protection Units (YPG).

Speaking to reporters in the capital Ankara on Saturday, Cavusoglu said Turkey wanted to see concrete steps by the United States to end its support for the Syrian Kurdish force.

McMaster said that Washington would not give more weapons to YPG militants. The two senior officials also agreed to boost mutual coordination and clear up misunderstandings on issues concerning Syria, the statement added.

Also on Saturday, the Turkish General Staff said in a statement that at least 394 YPG militants had been killed since the beginning of Operation Olive Branch in Afrin on January 20. The military said that only terrorists and their positions and shelters were being destroyed, and that “careful attention” was being paid not to harm any civilian.

Meanwhile, more than 10,000 people demonstrated in Cologne, Germany, on Saturday to denounce the Turkish offensive in northern Syria against YPG militants. The demonstrators held placards that read “Freedom for Kurdistan” and “Shame on you, Europe!” in the western German city.

The Syrian government has already condemned the “brutal Turkish aggression” against Afrin, rejecting Ankara’s claim about having informed Damascus of the operation.

“Syria completely denies claims by the Turkish regime that it was informed of this military operation,” the source added.

Ankara views the YPG as the Syrian branch of the militant Kurdistan Workers’ Party (PKK) that has been fighting for an autonomous region inside Turkey since 1984.

Turkish President Recep Tayyip Erdogan has repeatedly said that Afrin should be cleared of “terrorists,” and demanded the deployment of Turkish troops there during a speech back in November 2016.

This is while US officials regard the YPG as the most effective fighting force against the Daesh Takfiri terrorist group in northern Syria, and have substantially increased their weaponry and technology support to the terrorist group.

The controversy over a possible Syria border force first started on January 14 when a report emerged on Reuters saying that the military coalition led by the United States in Syria was planning to set up a large border force of up to 30,000 personnel with the aid of its militia allies.