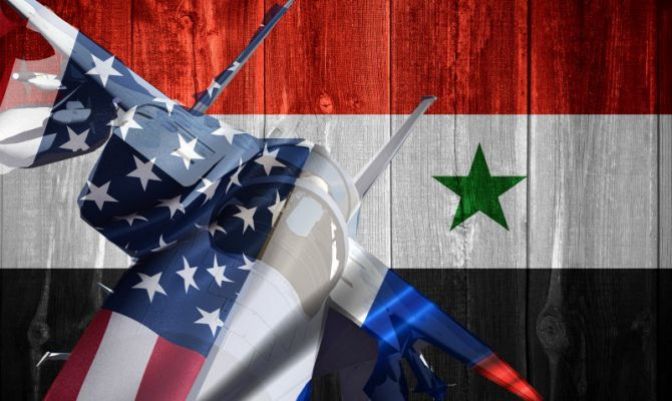 [ Editor’s Note: You just can’t make this stuff up. The countries who tried to conquer Syria, turning to terrorist proxy armies to help them do it when the real anti-Assad segment of Syria turned out to be a small minority, now want to present a new constitution and political structure.

Those behind the war crimes, plus crimes against humanity against Syria, have the gall to think that gives them the right, in defeat mind you, to tell Syrians that they should all be carved up into small powerless puppet states ruled over by the same terror masters.

Do they think the none of us can remember the former Qatari PM and FM on the Charley Rose show telling us that the US coalition had spent $137 billion trying to take Syria down? He cooked their gooses, and we aim to sever them to the public as long as we have a breath in us, for all the horrible, needless deaths in Syria that those really responsible must pay for.

I have been editorializing and mentioning in my interviews on the Syrian War that the US coalition countries would undoubted try to win during the peace process what it could not on the battlefield. They have proved me right beyond doubt with this ridiculous proposal.

And frankly I am quite surprised that they did. I would have suspected they would have paid someone like Jordan to front the project for them rather than all sign their names. It appears that Neo-Colonialism is alive and well in the Mideast.

After all, Jordan just eliminated its bread subsidies to raise $780 million in revenue to cover a loan that it wants. This will be doubling the bread prices on their backs of the poor while the fake Royals drive around like they are God’s gift to humanity …Jim W. Dean ]

Arab American and Muslim Congress Secretary General Dr. Zakaria Khalaf revealed to VT that personal memos sent to members of Congress and the Senate noted that the draft constitution proposed by the US, Britain, France, Saudi Arabia and Jordan for the “renewed Syria” will not fulfill the aspirations of the Syrian People and but divide the country, which appears to be their goal.

The new constitution provides for decentralization of Syria, self-autonomy entities, placing the country under UN mandate, and shrinking down the President’s powers.

“This constitution will be the basic pillar for Geneva talks,” Dr. Khalaf said, noting that the main aim of it is turning Syria into federations, and the United Nations will have the upper hand in Syrian parliamentary and presidential elections.

Arab American and Muslim Congress Secretary General also underscores that this misconduct resembles to a great extent what happened in Iraq and definitely will have negative repercussions on the region.

Dr. Khalf said, “The US will be cursed if endorsed such a constitution and its credibility as a super power will go down in the wind, especially those who drafted the constitution took an essential part in the destruction of Syria and the on-going conspiracy.

Socci conference to be held on 29th and 30th of this month will be a gathering for Syrians from different walks of life to supposedly negotiate the new future of their country. One local source told VT “it is a trip for photo opportunities and nothing important will come out of this wrapped up conference.”

“The solution is not in the Syrians hands, but will be imposed by outsiders who scramble out now to slice the piece of cake.”

Russia is trying to extend the provisional phase until an agreement is reached with the United States on the position of Presidency and the nature of the constitutional and democratic reforms.

It is believed that Moscow will makes some comprises to the West to make its conference a success, but nothing yet is certain. There are always last minutes surprises, it is a wait and see game.

Moscow is also very wary of US movements in Syria. Russian military officials revealed that the US is training now terrorist groups to carry out subversive operations in Damascus, Homs and Deir-ezoor.

The officials said that the US main goal is to disrupt any feasible political settlement in Syria, which is probably true.