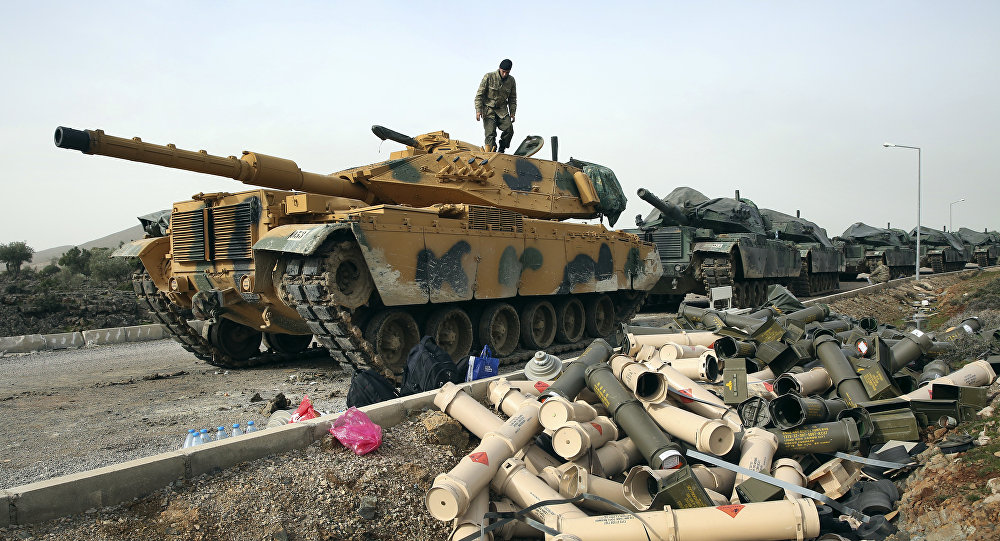 Turkey’s Operation Olive Branch is aimed to reach the objectives Ankara failed to achieve in the course of the Euphrates Shield campaign, Iraqi military strategist Amir al-Saidi has told Sputnik. According to the strategist, Ankara is seeking to bolster its positions to gain leverage in the Syrian peace talks in Geneva and Sochi.

“Now Ankara has influence on some factions which are operating in the de-escalation zones in Syria, but it wants more,” the Iraqi analyst noted. “Ahead of the Syrian National Dialogue Congress in [the Russian city of] Sochi, Turkey strongly opposes the participation of the Kurdish delegation except in the case of the Kurds coming as the Syrian opposition, not as representatives of the Kurdish people.”

The congress is due to take place on January 30, bringing together more than 1,600 representatives of virtually all layers of Syrian society, including opposition and government forces, numerous ethnic and religious groups. It is expected that the Kurds will be represented along with the Yezidis, the Assyrians, the Armenians, the Circassians, the Chechens, the Dagestanis, the Abkhazians, the Turkomans, and the Druze.

Delegations from the states involved in the Syrian peace process, as well as observers from the UN and other international organizations, will also participate in the event.The Syrian National Dialogue Congress is aimed at finding ways to facilitate the peace process in the war-torn country.

Commenting on Ankara’s ongoing Operation Olive Branch the strategist explained that the campaign is aimed at fulfilling the objectives which had not been met during the cross-border Operation Euphrates Shield, which took place between August 2016 and March 2017.

“Hence, we see that the recent statements by Turkish politicians about the planned steps in the Syrian operation are really turning into reality,” al-Saidi pointed out. “[However] the Turks may [suspend the operation] if the United States makes some concessions in, for example, the issues concerning the Syrian [Arab] Army’s actions in Idlib. Furthermore, the Americans can exert pressure on the Russian side to accept Turkey as a full participant in the negotiation process in Sochi and Geneva.”

Ankara launched the Olive Branch operation on January 20 by undertaking the offensive against the Kurdish-dominated city of Afrin. The town is held by the Kurdish People’s Protection Units (YPG), the backbone of the US-backed Syrian Democratic Forces (SDF). Ankara sees the Kurdish militia as an affiliate of the Kurdistan Workers’ Party (PKK), outlawed in Turkey and several other countries.On January 29 the Turkish General Staff reported that the country’s armed forces have killed 597 militants since the beginning of the military action.

Previously, the Syrian SANA news agency reported that the campaign had claimed the lives of about 86 civilians while 198 others had been wounded. The media outlet added that the offensive had caused damage to civilian infrastructure and archaeological sites.

While Ankara has emphasized that the operation is not aimed at undermining the position of Syrian government forces and seeks to thwart the threat posed by the YPG to Turkey, Damascus has signaled that it regards the Turkish campaign as a violation of the country’s sovereignty.For its part, Moscow has called upon the parties involved to respect the territorial integrity of Syria.

“Turkish-Iraqi military understanding was reached earlier when [the two countries] conducted military exercises at the common border,” the Iraqi military strategist said. “The Turkish foreign minister’s visit to Baghdad was not intended at getting the green light to the Afrin operation, but to discuss future possible joint operations against the Kurdish formations.”

On January 28, Turkish President Recep Tayyip Erdogan signaled that Ankara is determined to “clean” its entire border with Syria. “Step by step, we will clean our entire border,” the Turkish president said.

Earlier Erdogan announced that the Turkish Armed Forces might carry out operations in Syria moving eastwards to Iraq in order to expel the Kurdish militia from the Syrian-Turkish border regions.

The views and opinions expressed by Amir al-Saidi are those of the speaker and do not necessarily reflect those of Sputnik.