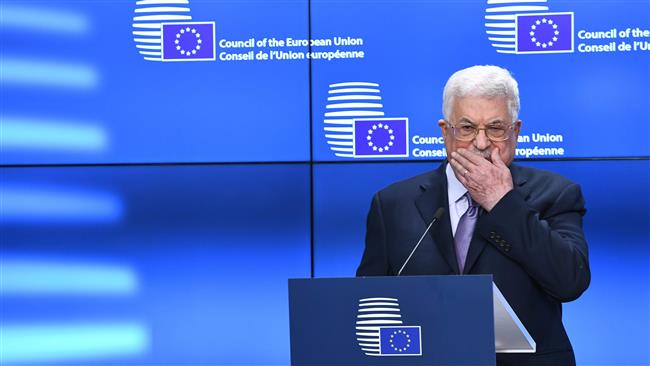 [ Editor’s Note: Abbas is playing the “Oslo card” late in the game. It is an excellent one to use but timing is everything when you are in a David and Goliath fight. He should have used it right away.

So we are left with using this Oslo breach to build the circular wall around Trump for all the past deals he is breaking, the lack of universal concern among Americans for him doing this, which is going to cast a long dark shadow over any future agreements the US wants to do.

With the growing track record we have running, what would be the point when we now have established that any new following president can use the “Trump Doctrine”, welshing on any deal, for whatever reason that he or she wanted. They can campaign, saying they are going to “Trump” this or that deal like Trump did.

First up will be the North Korea situation. After Clinton did his own version of the deal weaseling, writing into his agreement with them the he would use “the best efforts of this office” to conclude a political resolution. It never happened of course.

But as we are older and smarter now, we see that having a “resolution” is not really what the US Deep State wants, that or peace, as that sets the stage for the requesting of US military withdrawals, and we know who does not like that.

This is now the common thread in all the fake wars going on. Afghanistan is another typical example, with the story today of the Taliban being 60,000 strong and that does not include ISIS, who with its magical ability to move around, is an insurance policy for the US just in case the Taliban were to make a political deal with Kabul.

Sure, that would be a long shot, but the Deep State crowd always layers itself up with backup plans as it has seen the world change many times, but where that is at most just  bump in the road for them. It may sound corny but the enemy within is always the biggest threat because it makes itself indispensable.

Another version of that game is that is it is almost impossible to run for any major office here without the Israeli Lobby approval. Someone like me would consider that living in an occupied country, which of course were are ... Jim W. Dean ]

Palestinian President Mahmoud Abbas has said that the US move to recognize Jerusalem al-Quds as Israel’s capital killed the Oslo Accords. According to Channel 10 news on Saturday, Abbas made the remarks during a meeting with Israel’s Meretz political party leader Zehava Galon.

The Oslo Accords were signed between the Israeli regime and the Palestine Liberation Organization (PLO) during the early-mid 1990s to resolve the Israeli-Palestinian conflict and to guarantee the Palestinians’ right of self determination.

The Palestinian Authority (PA), which has limited governance over the occupied West Bank, was established following the Oslo Accords.

In December, US President Donald Trump announced that Washington would recognize Jerusalem al-Quds as the capital of Israel and would relocate the US embassy in Israel from Tel Aviv to the occupied city.

According to the report, Abbas was shocked by the decision, telling Galon that Trump had “promised a good deal to [resolve] the conflict, and then came this unfortunate surprise, which we cannot accept.”

“We are prepared for negotiations, and we never intended to leave the talks, but regrettably no one is offering us talks, especially not the Americans, who now wish to punish us,” he said.

Abbas also said that Washington can no longer play the role of mediator in peace talks after its al-Quds move.

“The Oslo Accords are dead, and even though Israel has not lived up to its obligations, we have so far not halted security cooperation. We are waiting to see if there can be negotiations under fair mediators,” Abbas said.

The US decision drew condemnation from world leaders and prompted Abbas to snub US Vice President Mike Pence during his recent trip to the occupied Palestinian territories by leaving the country.