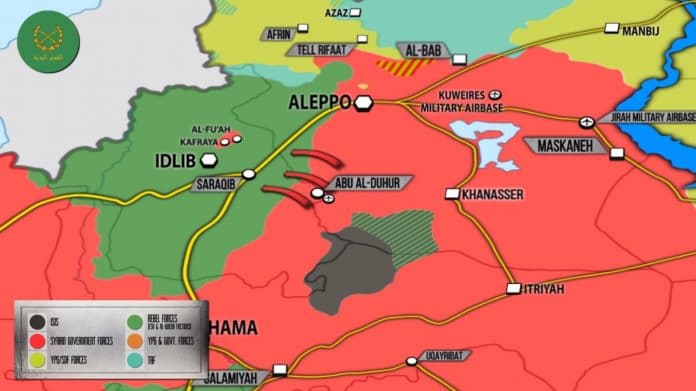 Government forces, led by the Tiger Forces, achieved a major breakthrough against Hayat Tahrir al-Sham (formerly Jabhat al-Nusra, the Syrian branch of al-Qaeda) in the province of Idlib. Government troops liberated over 15 villages, including Mushayrifah, Tall Sultan and al-Tuwaym.

This advance pursues two goals: to liberate the remaining militant-held area in southern Aleppo and to prepare an advance on Saqrib.

Meanwhile, Hayat Tahrir al-Sham and its allies started bulding additional fortifications in Saqrib and deploy reinforcements there.
Separately the SAA advanced on positions of ISIS in northeastern Hama and liberated the villages of Al-Aww, Abyan and Jubb Zrayq. The SAA progress there is limited by its ability to establish security in the controlled areas amid the constant threat from mobile ISIS units operating in the pocket.

On January 31, the Turkish-backed Free Syrian Army (FSA) claimed that its fighters had captured a man-portable air-defense system (MANPAD) from Kurdish YPG/YJP forces in the Syrian area of Afrin. The captured MANPAD is likely a Russian-made Igla (SA-18 Grouse) missile widely used around the world. The similar missile was used by the Kurdistan Workers Party (PKK) to down a Turkish Cobra attack helicopter in May 2016.

Earlier in January, media reports appeared that the US provided some MANPADs to the US-backed Syrian Democratic Forces (SDF) operating in northern Syria. Then, these reports were not confirmed by any evidence. The YPG/YPJ, described by Ankara as a terrorist organization and the local branch of the PKK, is the core of the SDF.

Separately, the FSA and the Turkish Armed Forces (TAF) captured the highest peak on the Qurne Mountains as well as the villages of Shankil and Bak Ubasi. It’s interesting to note that all the recent progress of the FSA in the Afrin area was achieved mostly thanks to an active participation of the TAF in the operations.

Despite the recent setbacks, Chairman of the Executive Council in the Afrin area Hifi Mustafa denied that the YPG is planning to hand over the Afrin area to the SAA, according to the Russian state-run news agency Sputnik. Haifi said that the YPG is negotiating with Russia in order to “stop the Turkish attack on Afrin” but didn’t provide any further information.

Pro-government sources speculate that the YPG somehow seeks to get protection from Russia and Iran remaining loyal to the US on the same time. This is a complicated task.