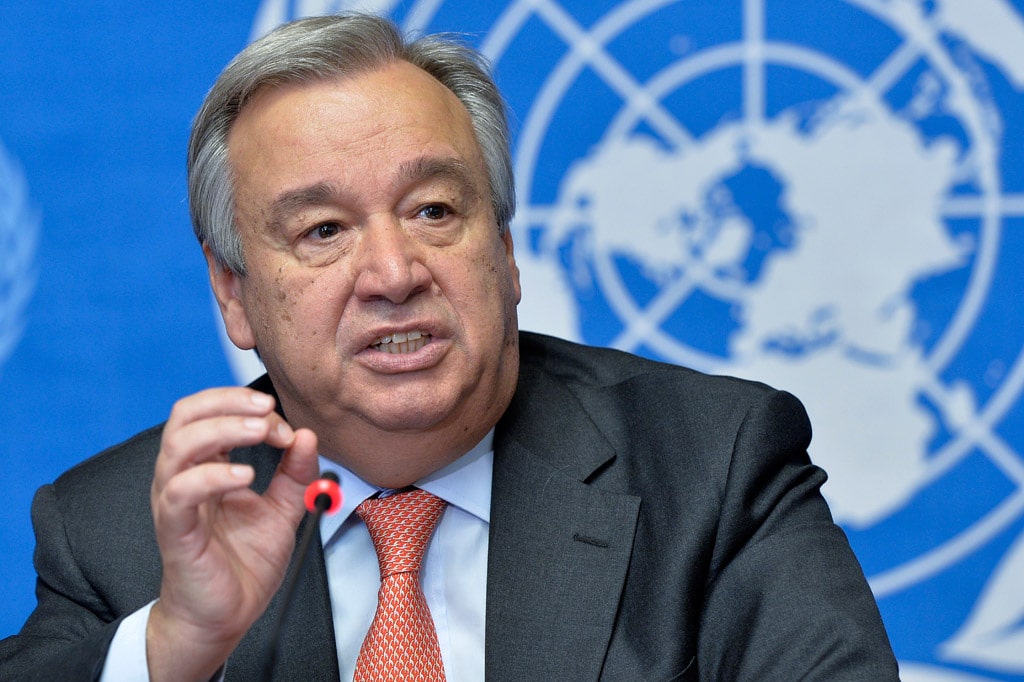 [ Editor’s Note: The UN’s Guterres just pulled the rug out from under the whining claims that the Sochi talks were some kind of a rouge operation to knock the UN talks out of the box.

The claims were a complete hoax, first because Moscow was coordinating Sochi with the UN, publicly stating they were no attempt so replace the UN.

Because the UN talks had been bogged down by the Saudi High Negotiation Committee’s (HNC) efforts to keep the talks going nowhere by constantly demanding pre-conditions which the UN said were improper for anyone participating, Sochi was designed to get around that roadblock.

The opposition’s strategy can clearly be seen as an attempt to stall the political talks to give the US coalition time to crank up some new chaos in Syria to have them die of crib death. But it seems that the Erodgan invasion is one finger of that ploy.

The whole purpose of Sochi was not to solve all the problems, but get the process jump started and quite visibly so. The concluding twelve point statement was a home run in that regard, and the cherry on top was to move the next step in the process back to Geneva where De-Mistura would have the final say on some of the key items.

All this can in no way be claimed as excluding the UN from the process, which is exactly what the hard core opposition did. And the 1600 participants established a large and diverse representation of those wanting to mover forward.

It was also a show of force against the small group of deal killers like the HNC, that the majority would not be held hostage to their demands.

As I have editorialized, the critical focus now for a successful resolution to the Syrian crisis is to maintain momentum with the political process. The US Coalition obviously knows this so it is doing all it can to disrupt it. As Gordon does so love to say, “Welcome to how the world really works” … Jim W. Dean ]

United Nations (UN) Secretary General Antonio Guterres has rejected criticism of the world body’s participation at Syrian peace talks in the Russian resort city of Sochi, praising the outcome of the discussions.

Speaking at a press conference at the UN headquarters New York on Friday, Guterres said the presence of UN Special Envoy for Syria Staffan de Mistura “in Sochi was based on a common understanding between the United Nations and the Russian Federation on the nature and outcome of the meeting and its contribution to the [UN-mediated] Geneva process.”

“The congress concluded with a statement fully in line with that common understanding,” he added.

Russia, Iran, and Turkey have been organizing peace talks for Syria in the Kazakh capital of Astana since January 2017. Together, the three countries have been acting as guarantor states for the peace process.

Capitalizing on the achievements of Astana, Russia on January 29-30 convened a high-profile meeting on Syria — the Syrian Congress of National Dialog — in Sochi.

One Syrian opposition faction boycotted that meeting, and some non-political groups opposed to Damascus later accused the UN of “rewarding” Russia “upfront” by dispatching Special Envoy de Mistura to the event before securing concessions from Russia and the Syrian government.

Russia and Iran are Syrian government allies. Turkey is an ally of the Syrian opposition. The collective efforts of the three countries, including the brokering of agreements that have significantly reduced fighting in Syria, have made an impact on the ground in the Arab country.

In contrast, a peace process held under the auspices of the UN — that in Geneva — has achieved little. That has angered some Western and Arab governments opposed to the Syrian government and some groups of Syrian opposition backed by those governments. They insist that the Geneva process be given more importance despite its failure so far to make meaningful achievements.

Guterres appreciated Russia’s engagement with the UN regarding the Syria talks. He highlighted the key subjects of the 12-point final Sochi statement, saying that the document embraced a vision of Syria for all its citizens and underlined the need for the formation of a Constitutional Committee under UN auspices.

Around 1,600 delegates representing a wide range of Syrian political factions attended the Sochi talks. The event was boycotted by the High Negotiations Committee, which is based in and guided by Saudi Arabia.

Damascus welcomed the results of the event and stressed that its final statement affirmed that political progress in Syria cannot begin except under the Syrian leadership and without any foreign interference.

The Sochi conference took place just days after the ninth round of UN-led Syria talks failed to achieve tangible results. That round was exceptionally held in the Austrian capital, Vienna, instead of its usual venue of Geneva.