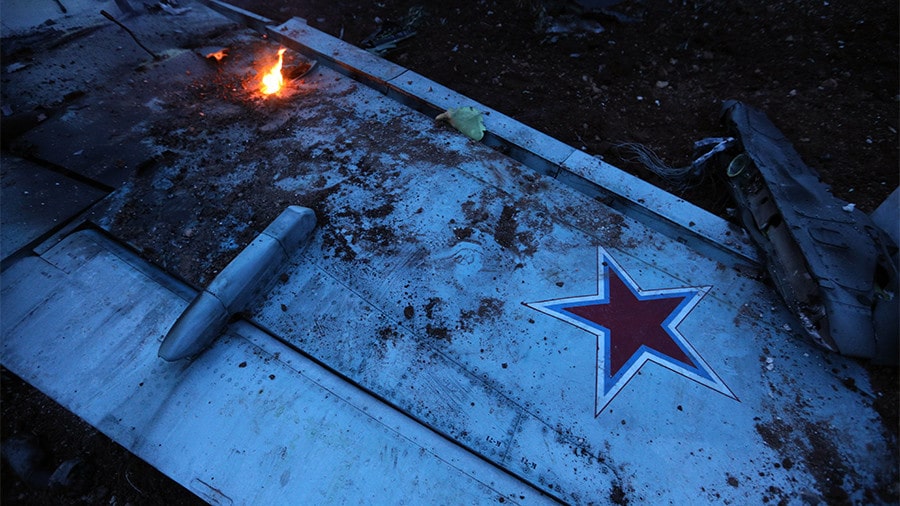 [ Editor’s Note: This is a risky operation, sending in a Syrian commando team to sift through the wreckage of the SU-25 lost yesterday by a manpad of unknown origin.

The HTS jihadis would put everything they could into killing or capturing this team. Sure, the team would have a lot of air support; but the best kind, with combat helicopters, would add another layer of risk for getting caught in manpad ambushes themselves.

It seems that being able to prove where the manpad came from has been voted a top Syrian-Russian priority that would justify risking the commando team.

While the US can claim it has not supplied manpads to Syrian proxies, the dodge there is they could easily have come from Saudi Arabia or any of the Gulf State allies, and of course Turkey.

Russia sees the introduction of these into the Idlib battle space, which has made a mockery of being a ceasefire zone, a red line, but needs to know exactly where they came from to make a major incident over it.

Turkey has guaranteed nothing in Idlib other than to not impede the jihadi supply lines. With “allies” like this, who needs enemies?

What good does it do to point that out, when both Russia and Iran are turning a blind eye, as they have overlapping “other issues” with Turkey that they do not want upset. That gives cover for the US and the Gulf States for doing the same… Jim W. Dean ]

A Syrian special forces operation is reportedly underway in the area where a Russian Su-25 jet was downed by a MANPAD rocket on Saturday. The goal is to find evidence allowing the weapon to be traced to its origin.
–

The Russian warplane was downed by a shoulder-fired anti-aircraft rocket, according to the Russian defense ministry. Moscow is very interested in establishing how exactly the weapon system got into the hands of the militant group responsible for attack, Russian MP Vikotor Volodarsky told RIA Novosti.

The group that had the MANPAD has been destroyed by the Russian Air Force. Now the Syrian commandos are working on the ground. If they find elements of that launcher, we could trace its serial number and establish its origin to the factory in a few days, find out how it got there,” the Russian MP said. He added Russian planes are providing air support to the Syrian troops.

Earlier the US asserted that it did not provide the MANPAD to the group which shot down the Russian plane.

“The United States have not provided any of its allied forces in Syria with anti-aircraft weapons,” Pentagon spokesman Maj. Adrian J.T. Rankine-Galloway told TASS.

The incident happened in a part of Idlib governorate controlled by the jihadist group previously known as Al-Nusra Front, according to the Russian military.

Here are the last moments of the ground fight. The pilot fount a good fighting position with some large boulders but when taking fire from 360 degrees, you are toast. He had one empty, and two half full clips in the jihadi photo of the gun.