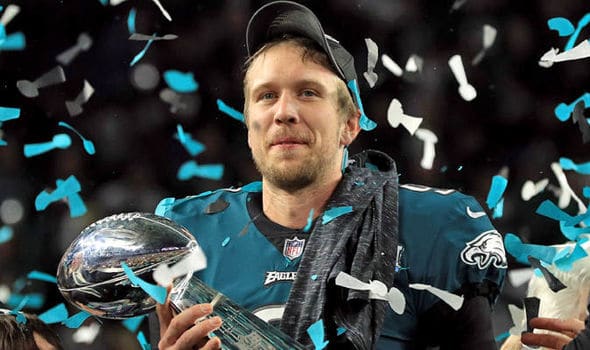 What a great game yesterday! Super fun event from top to bottom. So many good things to point out. But there is one thing that is NOT so great and blatantly incorrect, foolish and has no future. It’s not so much to do with the game as it is to do with our national conscience and correct mindset for our now and future success.

You see the National Football League (NFL) is a NOT a world league. It’s a national league comprised of USA teams only! There is NOT one team outside the USA. In fact, the overwhelmingly majority of the players (99%) are USA born and raised.

But yet, on cue, after the game, many of well intentioned players, coaches, owners, announcers, analysts, and fans declared the Philadelphia Eagles “World Champions”.

Declaring the winner of this U.S. National league a “world champion” is wrong both technically and literally incorrect.  Time’s up! It’s time to end this non-sense.

Leaders need to put an end to this exceptional arrogance. It may sound cute from inside but, from outside looking in, it’s bizarre at best. At worst, it’s openly arrogant and contemptuous confirming USA nationalism is simply out of control and actually beginning to hurt itself on the global stage.

Granted, if the US champion Eagles did play the best of all the countries or even a world all-star team, they would probably win because this is still uniquely a U.S. sport. Yes, of course Canada and Mexico have their leagues and they are good. But they are nowhere near the level of competition as the much older and established NFL. But that’s not the point. The point is the NFL like MLB both declare the winners of their national leagues “World Champions” when, in fact, they are NATIONAL CHAMPIONS; plain and simple! (in MLB, they are national champions plus Toronto).

In our newly 21st century connected world, the USA plays an important role. So we need it to begin the process of letting go of the antiquated 20th century golden age thinking and embrace the future and its important role in all of our lives; worldwide.

In other words, USA needs to stop acting out with extreme arrogance. Innocent or not times up! We need to adjust!

I know some reading this will take offense. So please do! Make your comments below and explain why a national league of USA teams is world champions of anything? We need to call it correct!

OTHER SUPER BOWL WINNERS and LOSERS – OBSERVATIONS FROM THE GAME

Their pro-humanity anti-racism commercials were world class. Toyota stood highest with their ONE TEAM.

When weak sad feeble insult comic politicians exploit racism for political gain, they hurt every one of us. So I am super impressed Corporate America taking lead; capitalism at it’s best when it serves all its customers. A + 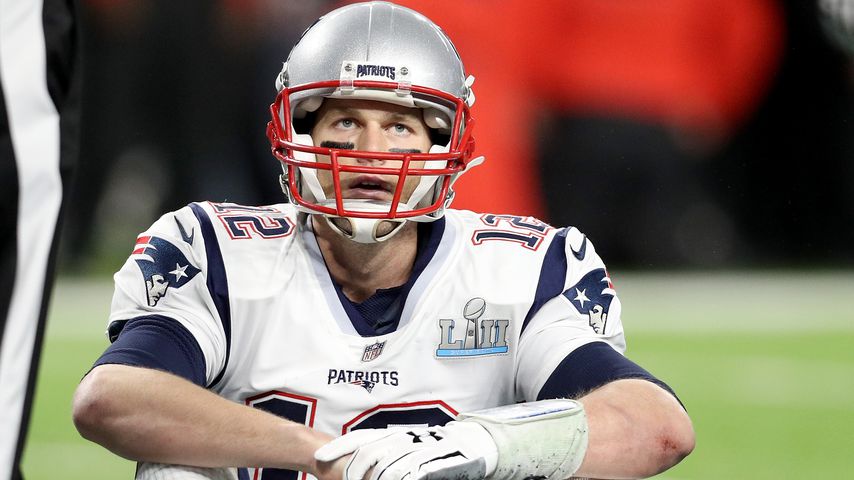 He threw for 505 yards; most in NFL Post-Season History! Till last moment, NFL’s greatest gladiator of all time had his team with chance to win.

This after throwing for 4600 yards (most in NFL) with 32 TDs and 8 Int during season and ed MVP of league. Oh, 40 years of age; the oldest QB to every play in Super Bowl! Let’s be clear, deep threat Brandin Cooks was out early in game while Edelman, his best was lost early in season. Yet Brady kept pressing on! WOW!

His team lost because Defense did NOT play well. Giving up 41 points in any game is tough to overcome. Worse, Malcolm Butler, PATRIOTS best defensive player NOT even on field. Why? Coach gave lame excuse. Something on Defense went wrong yesterday. What? They are NOT saying. 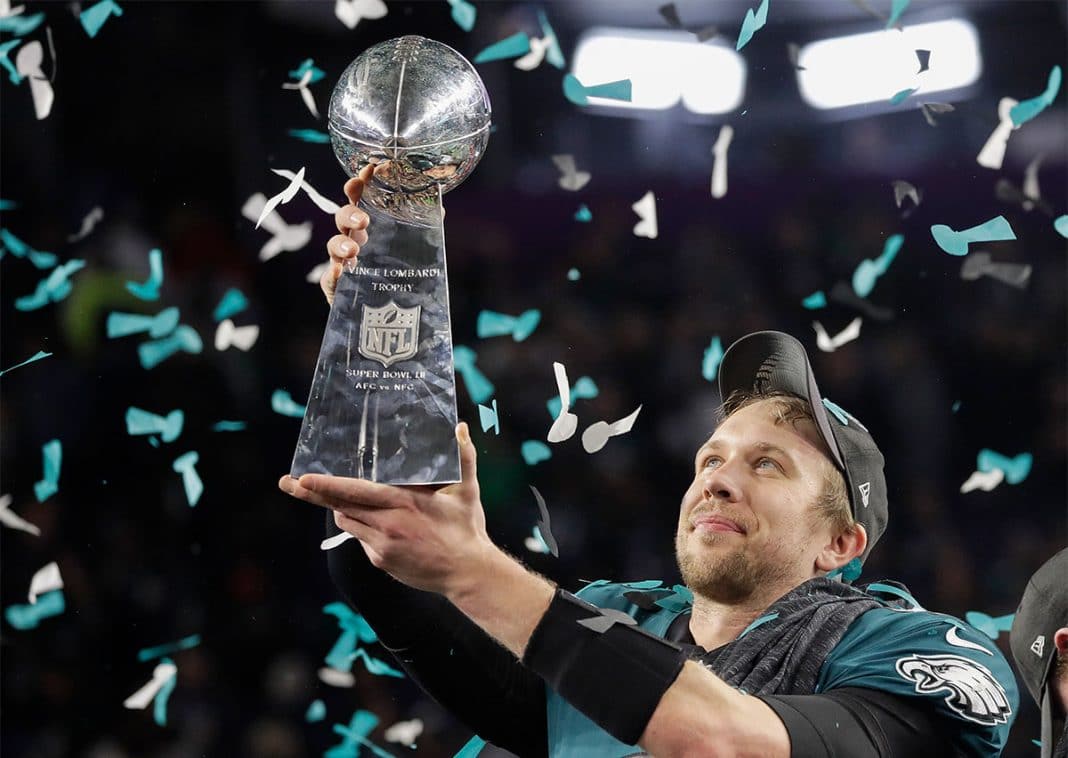 Weird but Foles may NOT be with Eagles next year. Quarterback Carson Wentz is their guy. So Foles will prolly get traded and a huge payday; Broncos? Cardinals? Jets? Browns?

Being a BRONCOS fan, I hope GM John Elway picks him up. Then moves up in the April draft to pick stud running back Sqaquon Bradley. Boom, they get a Super Bowl QB with bad ass RB. They already have two excellent WRs. They just need a few lineman and a top 5 tight end and they are back in the offense business. 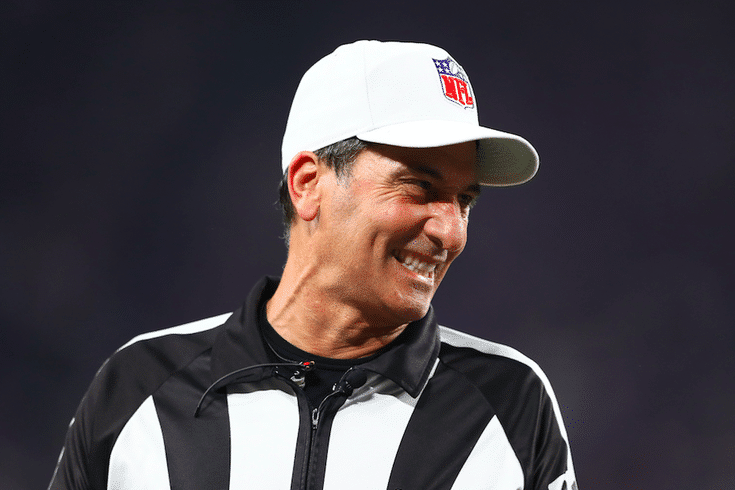 They clearly missed blatant obvious pass interference on last play against HOGAN taking him clearly out of play. Awful missed call that would have given Patriots ball on 30 yard line with one more play.

Also object to touchdown by Philly when players foot was clearly on white line. And that Ertz Touchdown? Looked a lot like Jesse James NO touchdown for Steelers a few weeks back. These 3 plays changed game for negative. Ouch! 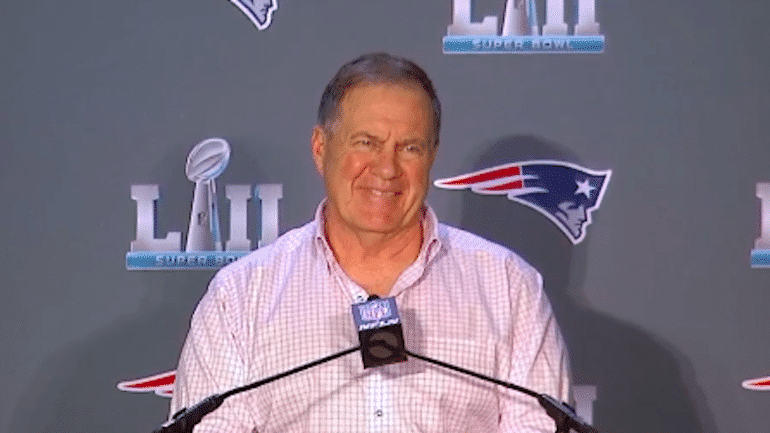 Why bench their best defender Malcolm Butler? Coach said “we put players in giving us best chance to win”. OK, let’s buy that non-sense for a second. But after Foles torched their backup cornerback 3 times hitting Eagles wideout Alshon Jeffrey for first 2 quarters, they still doubled down?  And then they gave up 41 points in total and still did not put their best defender in the game.  What’s the double down on a bad decision?

Butler played the most snaps of any defender during the Patriots season. He was hero of 2015 Super Bowl and played awesome in last year’s Super Bowl. And just before game time is told he would not play?  How did that make him feel?  We saw him crying during the game.  It was sad.  And how about the rest of the defenders?  They knew he was not on the field.  Do you think that helped?  Hell no!  They must have been livid.  It had to cause some locker room division.

So come on man!  What happened?  Clearly something else was going on there. But No one is saying; not yet! Something stinks!