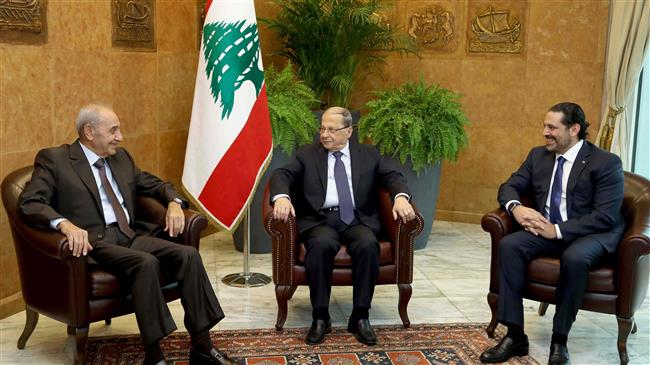 [ Editor’s Note: I had expected the full assault on Lebanon to emerge after the Mossad/Saudi caper with Prime Minister Hariri crashed and burned. It did not take long.

Out of the blue can the threat of bombing Lebanon into the Stone Age, challenging its right to oil and gas deposits off it’s own coast, and then planning new border provocations on UN territory, as the UN has been meek historically over all Israeli border incidents.

And then of course Bibi threw in the Iran bogeyman for good measure. It seems the Zionists lay claim not only to Lebanon petro resources but also to determine the limitations on its defensive strength.

Despite international law and the UN charter guaranteeing the right of self defense, Israel, and the US, feel that countries have only the rights that they have agree to. And in this case they prefer to frame anyone with a credible defense as a threat, and hence subject to a pre-emptive strike, for “defensive purposes”.

This is the reasoning of the criminal mind, or minds in this case. In terms of aggressive threats floating around the planet, these two are the biggest, and the international orgs are responsible for things getting to this state, for not have taken a firmer stand earlier, especially the EU. These are dangerous times … Jim W. Dean ]

Lebanese leaders have agreed to take actions at the regional and international levels against Israel’s plans to construct a border wall and the regime’s threats against Lebanon’s offshore oil and gas exploration projects.

President Michel Aoun held the meeting with Parliament Speaker Nabih Berri and Prime Minister Saad Hariri before noon at the presidential palace of Baabda on Tuesday in an attempt to boost stability amid rising Israeli threats against the country.

The Lebanese leaders discussed “the Israeli threats, and saw in them … a direct threat to the stability” of the border region, a statement by the presidential office said.

The top Lebanese officials denounced the Israeli threats against the country’s borders as violation of the UN Security Council resolutions, noting that Tel Aviv’s measures jeopardize the efforts by the Lebanese army and the UN peace keepers to maintain the regional security since 2006.

The meeting comes after tensions flared last week between the Free Patriotic Movement (FPM), founded by Aoun, and the Amal Movement, presided by Berri, fueled by a video in which Foreign Minister Gebran Bassil, who heads the FPM party, was shown calling Lebanon’s parliament speaker a “thug.” A wave of protests by Berri’s supporters ensued.

The gathering focused on discussing the necessary measures the country needs to take after Israeli remarks on oil and gas exploration in south Lebanon’s Block 9.

Israel’s minister of military affairs, Avigdor Lieberman, has described as “very provocative” a Lebanese tender for projects in two of its 10 offshore blocks in the Mediterranean Sea. Tel Aviv, which claims sovereignty over Block 9, also urged international firms not to bid.

Lieberman’s remarks came as Beirut is set to hold a meeting on February 9 to sign contracts with three international gas exploration firms.

In another hostile remark against Lebanon, Israel’s Transportation Minister Yisrael Katz threatened to return Lebanon to “the Stone Age,” if it is turned into what he said an Iranian factory of precision-guided weapons.

“Israel has set a red line—it will not allow Lebanon to become a factory for the production of precision-guided missiles for Iran,” Katz said in an interview with the Ynet studio on Sunday.

He claimed that “Iran is working to turn Lebanon into an advanced post against Israel and has basically taken Lebanon hostage through Hezbollah by implementing its aggressive trends.”

“We are being very clear. If an open, comprehensive conflict develops as a result of Hezbollah’s aggression, we will act very firmly, much more than we did in 2006. Not a single target in Lebanon will be immune, and any infrastructure used both by Hezbollah and for military purposes will be hit. Lebanon will go back many, many years, some say to the Stone Age and others say to the age of cavemen.”

Nearly 1,200 Lebanese, most of them civilians, lost their lives during Israel’s 33-day war on Lebanon back in the summer of 2006.

According to the 629-page Winograd Report by the Israeli regime itself, Hezbollah fighters involved in defending Lebanon against the Israeli war defeated the enemy and Tel Aviv was compelled to withdraw without having achieved any of its objectives.

Katz’s remarks echoed Prime Minister Benjamin Netanyahu’s statements before his recent visit to Russia in which he accused Iran of trying to turn Lebanon into “one giant missile site” against Israel.