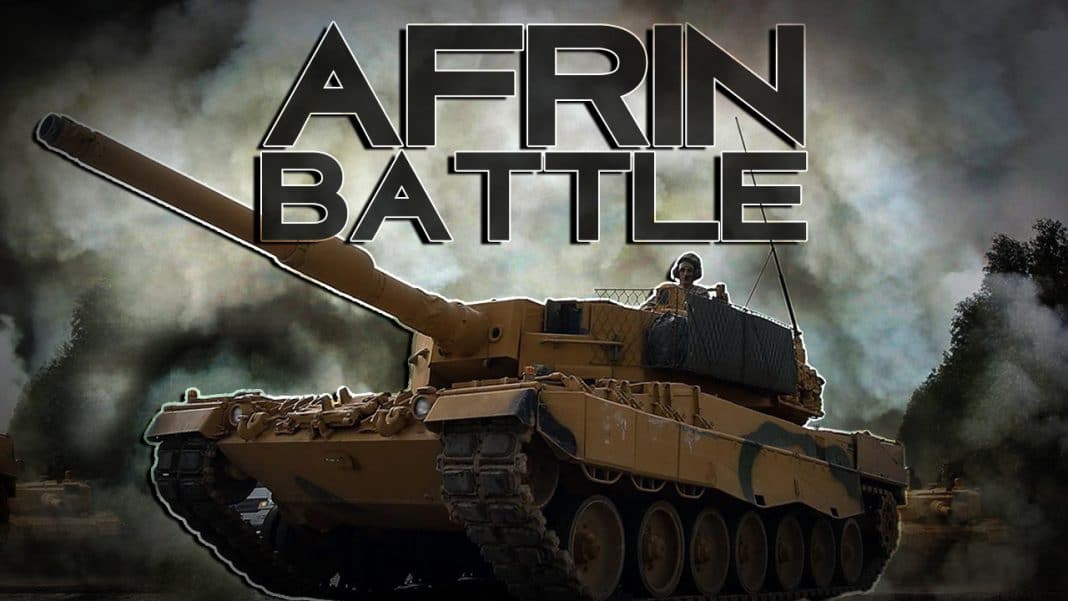 A large convoy of the People’s Protection Units (YPG) and the Sinjar Resistance Units (YBS) was filmed in the city Afrin overnight on February 6. The convoy reportedly consisted of over 100 vehicles, including buses. According to various sources, the total number of YPG/YBS fighters in the convoy was between 1,500 and 5,000, most likely the real number is about 2,000. This force will definitely participate in the ongoing clashes between the YPG and the Turkish Armed Forces (TAF).

Reports say that the convoy had reached Afrin from the Kurdish-held area in northeastern Syria and northwestern Iraq through the government-held area east of Aleppo and link this development with the Russian Su-25 shootdown, which took place in the province of Idlib on February 3. According to this version, the YPG, the YBS and other Kurdish-dominated militias prepared these reinforcements some time ago, but were able to reach an agreement with the Syrian Arab Army (SAA) to reach Afrin only recently. The appearance and the usage of man-portable air-defense systems (MANPADs) by the so-called moderate opposition promoted and backed by the Turkish leadership became a trigger of the decision to allow the Kurdish reinforcements to Afrin.

While Turkish media and officials continue to blame the Syrian-Iranian-Russian alliance for the ongoing operation against Hayat Tahrir al-Sham (formerly Jabhat al-Nusra, the Syrian branch of al-Qaeda), the TAF had done almost nothing to combat the terrorist group despite the deployment of its forces near the areas held by it.

On the other hand, the Assad government is also interested in the weakening of the Turkish influence in northern Syria. So, there is a chance this decision was the initiative of Damascus.

The Syrian military officially announced on February 5 that it had deployed new air defences and anti-aircraft missiles to frontlines in the provinces of Aleppo and Idlib. On the same time, reports appeared that the Turkish Air Force was forced to limit its air campaign against the YPG in Afrin under the Russian pressure. The fact is that the number of Turkish airstrikes had been close to zero over the past few days.

In any case, Ankara faced the consequences of its double-faced policy towards Hayat Tahrir al-Sham (HTS).

In the Afrin area, the TAF and the Free Syrian Army continued their operation against the YPG and captured the villages of Sourkeh, Al-Amod and Dekmet Tash as well as Sarghaya Hill, according to pro-Turkish sources.

According to the Turkish General Staff, about 1,000 so-called “terrorists” have been “neutralized” since the start of Operation Olive Branch.

However, this number is likely far from the reality considering the lack of any major TAF progress on the ground.

In turn, Kurdish militias have used at least 12 anti-tank guided missiles against the TAF and the FSA. According to existing reports and videos, the YPG targeted three Leopard 2A4 battle tanks, two M-60 Sabra battle tanks, three bulldozers and four stationary targets.

On February 5, the TAF launched another attempt to establish an observation post in the militant-held town of Al-Eis and even launched construction works there. The country’s general staff even said that its forces had started reconnaissance for two additional observation points.

Later on the same day, reports appeared the TAF and pro-government forces engaged each other in an artillery duel there. A Turkish service member was reportedly killed. The situation over this issue remains unclear.

Some Syrian sources describe the Al-Eis observation point as an attempt to limit the SAA anti-terrorist operation in the area.

Meanwhile, HTS continued its attempts to develop momentum against the SAA in the Tell Sultan area in eastern idlib. Fierce clashes are ongoing there.

In eastern Damascus, the SAA and the Republican Guard advanced on positions of HTS in the Ghubair area and captured some factory buildings there. If government forces are able to secure the southern flank of the Armoured Vehicles Base, they will stabilize the situation in Eastern Ghouta. Meanwhile, Ahrar al-Sham, HTS and other militant groups use the besieged base to pressure government forces there.