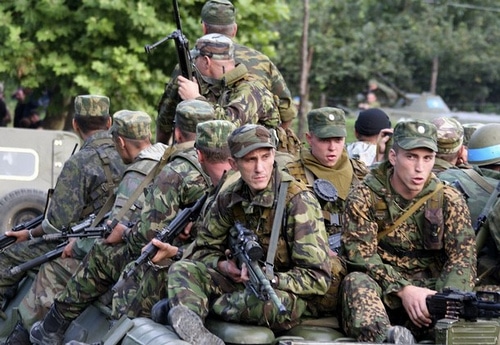 [ Editor’s Note: We have a double header from the Russian Defense Ministry sending some hints out…better late than never. It has been sitting back without saying a word about the continued logistics supplies going into HTS and al-Nusra in the Idlib-Aleppo “de-escalation zone”, with the borders controlled by Turkey.

General Konashenkov spills the beans, finally, with using using the term “one or more technology advanced countries” are trying to derail any positive momentum from the defeat of Daesh.

It is a reference regarding who is supplying items like the Manpads now. And the cherry on top is the mention of an item that everyone seems to have forgotten about, that these can be used on civilian airliners.

Those of us who have been around a while know that once these things get distributed out among jihahi groups, there is no way to control how they are used. But the even more evil twist to that is that the unnamed third party countries can now take down a civilian airliner themselves with the jihadis pre-staged to take the wrap for it.

No, I am not kidding. UN member countries would do such a thing if they felt they needed to play a Trump card, pardon the expression, to completely change the momentum of a conflict. As an example, look at what the West and NATO did when they murdered those people in Maidan Square in Kiev, to overthrow the government so as to have a desperate proxy puppet on Russia’s border.

Our not being able to get State sponsored terrorism on the table in terms of removing sovereign immunity for it, is the biggest security threat that we all face. Frankly, if the UN does not have the balls to face this, then it is time we started a discussion on replacing it with something that would, while we still have time … Jim W. Dean ]

Russia has reportedly deployed additional Special Forces units at frontlines in Syria following the Su-25 shootdownin the province of Idlib.

According to reports, Russia’s Special Operations Forces are now actively operating in the provinces of Hama, Aleppo and Idlib, at the frontline between the Syrian Arab Army and Hayat Tahrir al-Sham (formerly Jabhat al-Nusra, the Syrian branch of al-Qaeda) as well as in the province of Deir Ezzor.

A notable number of Russian military advisers has been recently spotted in the area of the Abu al-Duhur airbase in the province of Idlib.

Some pro-government sources link the growing military activity with the upcoming advance on the militant-held city of Idlib. The lack of Turkish airstrikes on YPG positions in northwestern Syria may also indicate that the Turkish Air Force had been politely limited in its operational space in Syria.

Hayat Tahrir al-Sham (formerly Jabhat al-Nusra) is receiving weapon supplies from the third parties seeking to derail “the peace process in the de-escalation zones, ousting the moderate opposition from there,” the Russian military said on February 7.

According to the Russian Defense Ministry’s  spokesman Maj. Gen. Igor Konashenkov, Nayat Tahrir al-Sham [Jabhat al-Nusra] remains a major source of the instability in “de-escalation zones” and across the country, in general.

Konashenkov also voiced concern with Hayat Tahrir al-Sham militants obtaining MANPADs, which could be used “not only in Syria and not only against warplanes.” He added  that the Russian military is working to trace the channels through which the weapons have been supplied.

The spokesman also recalled the UAV attack at the Russian facilities in Hmeimim and Tartus.

“This confirms our fears that the terrorists of Al-Qaeda’s offshoot [Jabhat al-Nusra] have become an obedient tool in the hands of one or a number of technologically advanced countries that are dissatisfied with Russia’s key role in liberation of Syria from Daesh [ISIS]”, Konashenkov said.