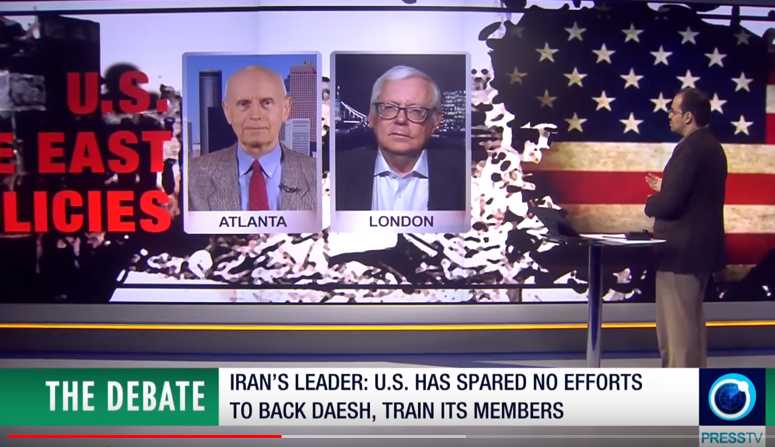 [ Editor’s Note: We had a chance to review US Mideast policy today, a more wide ranging agenda than usual. When I got the email I thought they had not decided which to cover, but we did them all.

These broader range shows are more interesting to do as there are a lot more opportunities to bring in new background material and do some dot connecting.

This was the first time I had mentioned on Press TV about the US helping build Israel’s ten ICBM silos for its MIRV’d missiles that can reach Moscow, Beijing and Washington. I have a problem with everybody knowing about this but the American taxpayers who owe the money for it all.

The sad backdrop for this show was not the mistaken bombing of Syrian troops like before in Deir Ezzor, but one done on purpose. This was America’s reply to claims that it is in the country illegally and not coordinating any of its missions with Damascus.

The US claims it did coordinate with Russia before and after the strike, which seems unlikely as that would have given the Russians the ability to warn the Syrians. It has the strong smell of a psy ops to me, driving a wedge of trust between the Syrian people and Russia.

The Pentagon is also showing its hand that it has committed to the Kurds who took the fields that the US will defend their keeping them until a future negotiated settlement. It showed today it would act as guarantor, and with deadly force if it decides to. I also think it was a not too subtle display for the Turks of what can happen to them.

And of course the US will give itself permission to stay in Syria, just for spite at not being successful at rolling up the country after spending what the former Qatari PM said was $132 billion. US foreign policy now is might makes right, a sad ending for a once great republic …JD ]

During his campaign, Trump labeled Obama & Clinton as co-founders of Daesh. Ayatollah Khamenei too has called out the US for its relations with the terror group.

While the US says its fighting Daesh in Syria, its attacks on the Syrian army have pushed the conclusion that the US isn’t fighting terror in Syria, but is seeking to control the country.

Add to this American weapons in the hands of Daesh, Saudis, Israelis who kill innocents without accountability, while the US points fingers at others for human rights issues. Join me Waqar Rizvi, as we discuss these & other issues tonight.