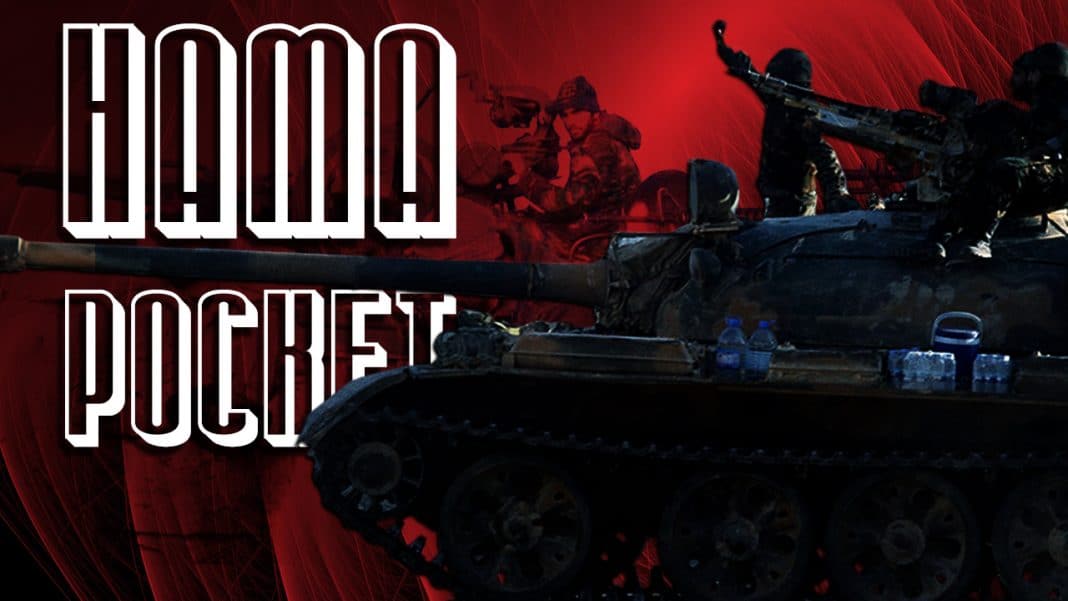 The Syrian Arab Army (SAA), the Tiger Forces and their captured Ibn Wardan Qastel and the large nearby area in the northeastern Hama pocket after the ISIS defense had collapsed there. According to pro-government sources, army troops are now close to full liberation of the area.

Government forces are also working to evacuate civilians and to remove IEDs and mines from the recently liberated villages.

Hayat Tahrir al-Sham (formerly Jabhat al-Nusra) and its allies failed to overrun the SAA defense in the area of Abu al-Duhur and their attack resulted in almost no gains. Pro-government sources say that the militant groups lost about a dozen of fighters and two vehicles in the recent clashes.

Separately, the Syrian military increased airstrikes on positions of Hayat Tahrir al-Sham, Jaysh al-Islam, Ahrar al-Sham and Faylaq al-Rahman in the districts of Irbin, Duma, Harasta, Madira, Mesraba, Zamalka and Saqba in eastern Damascus. Local sources link this activity with the facts that the militants rejected a ceasefire agreement reached during the Vienna talks.

Kurdish YPG/YPJ forces repelled attacks of the Turkish Armed Forces (TAF) and the Free Syrian Army (FSA) in the districts of Sheikh al-Hadid and Bulbul. According to pro-Kurdish sources, the YPG/YPJ killed over 38 members of the Turkey-led forces as well as destroyed two vehicles and a battle tank in the recent clashes.

According to the TAF’s general staff, Turkish forces have neutralized over 1,000 Kurdish fighters and some mysterious ISIS members since the start of Operation Olive Branch. Meanwhile, the pro-opposition Syrian Observatory for Human Rights says that over 123 Kurdish fighters have been killed. This number is likely closer to the reality.

Contradicting reports are circulating about the February 7 strikes of the US-led coalition on government forces in the province of Deir Ezzor. According to some US military officials quoted by the mainstream media, over 100 pro-Assad fighters were killed in the strikes. Syrian media activists say that 25 government fighters were killed and about 50 others injured. According to the February 8 statement of the Russian Defense Ministry, 25 people were injured in the attack. The ministry added that government troops were conducting an operation against ISIS sleeper cells in the area when they were shelled with mortars, rocket launchers and then attacked by the coalition’s attack helicopters. It should be noted that according to the US-led coalition’s version, government forces were attacking positions of the US-backed Syrian Democratic Forces (SDF).

Meanwhile, the Arab al-Bakara tribe announced in an official statement that dozens of its members were killed in the coalition strikes. The statement added that al-Bakara is ready to fight ISIS, the SDF and the US-led coalition.

The situation revealed the high level of tensions existing in the Euphrates Valley region. These tensions may be used by ISIS to resume its terrorist activities in the area.