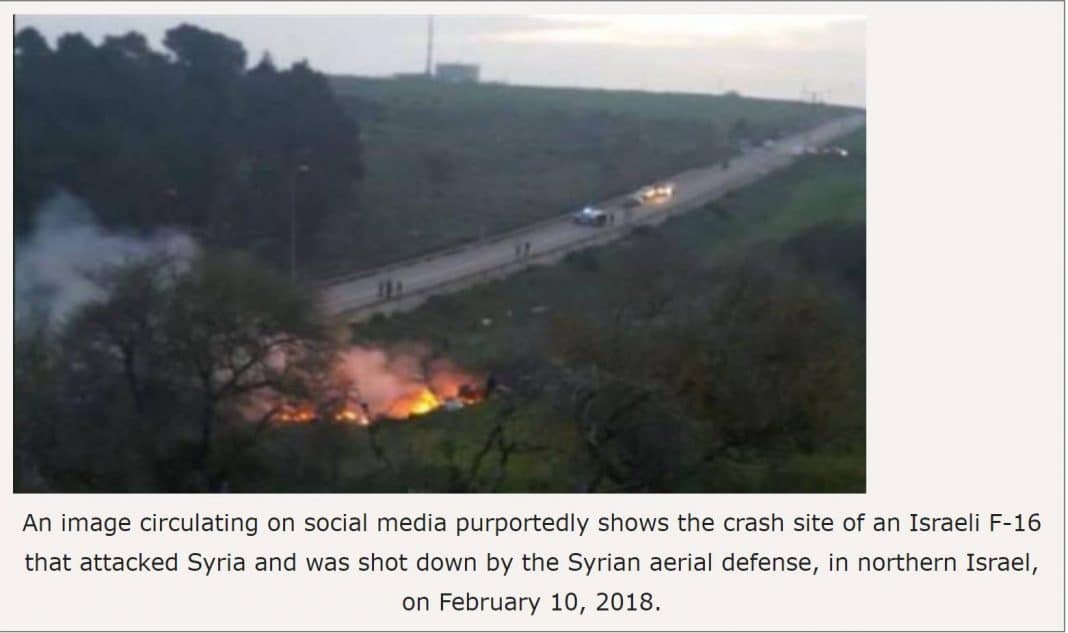 Editor’s note: We have verified the crash of one Israeli F16 hit over Syria but crashing inside Israeli occupied territory.  Israel claims the pilot survived.  Another Israeli plane, an F 15E, was also hit, both pilots are reported to have ejected.  This is not confirmed… Gordon Duff

The Syrian military has hit at least one Israeli F-16 warplane that attacked positions inside Syrian territory, with its two pilots ejecting out. Syrian state TV cited a Syrian military official as saying that Syrian aerial defense had responded to Israeli “aggression” against an army base in central Syria.

The official said more than one Israeli aircraft had been hit. At least one Israeli F-16 was hit it, going down in flames and smoke.

The Israeli military confirmed that the warplane had gone down in northern Israel, and that the two pilots had been transferred to hospital.

The Israeli military claimed that it had attacked positions inside Syrian territory after it intercepted a drone launched from Syria on Saturday.

Over the past years, Israel has frequently attacked targets in Syria, often claiming that it hit positions or convoys belonging to Iran. This is while Iran has no military presence in Syrian territory, only offering advisory military assistance to the Syrian government fighting an all-out foreign-sponsored militancy.

The incident took place after the Israel Defense Forces (IDF) intercepted an Iranian UAV, which crossed from the territory of Syria into Israel. In response, the Israeli military attacked Iranian positions in Syria. The operation triggered anti-aircraft fire by Syrian forces.

IDF has targeted the Iranian control systems in Syria that sent the #UAV into Israeli airspace. Massive Syrian Anti-Air fire, one F16 crashed in Israel, pilots safe. #Iran is responsible for this severe violation of Israeli sovereignty. Event ongoing, more to follow.

“We identified an Iranian drone UAV which took off from Syrian territory. The drone was identified by IAF systems and was downed by an IAF helicopter. The Iranian drone fell in our territory and is in our possession,” IDF spokesman Ronen Manelis said earlier, as cited by Haaretz. He described Israeli operation in Syria as “a surgical action deep in Syria.”

Red alert sirens were heard in multiple areas across northern Israel, initially in the town of Beit She’an and later in the surrounding areas and Golan Heights. Local residents told Haaretz that they heard many blasts and reported heavy aerial activity in the area near the Jordanian and Syrian borders.

Israeli “aggression” targeted an army base in the central region of Syria, Sana reported, citing a military official. Syrian air defenses struck more than one jet responding to the aggression, the official said.

Syria has repeatedly protested Israeli attacks on targets inside Syria. Earlier this week, Israeli warplanes attacked military targets near Damascus from Lebanese airspace, with the Syrian Army claiming it destroyed most of the Israeli rockets.

In January, Israel launched three attacks on military targets in Syria, using jets and ground-to-ground missiles. Back then, Damascus claimed that it shot down one Israeli jet and one missile.