We begin with a video from 2014 outlining a claimed Iranian hack on the US Navy.  VT has since traced those hacks to sub-contractors of Booz Allen Hamilton, a major CIA contractor, who spoofed Iranian servers using Virtual Private Networks, all originating from computer systems at the US Department of Veterans Affairs in Washington.

If only I were making this up.  Read more about the most recent adventures of this group, caught hacking into the Colombian banking system and falling into a “hacker ambush” at Veterans Today.  Now on to Ian Greenhalgh:

We have all heard the official narrative of the Israeli airstrike on Syria now, thanks to the ever-compliant MSM; an Iranian drone, controlled from a Syrian airbase, violated Israeli airspace so the Israeli airforce struck the Iranian control centre, destroying it and sending a stark message to Damascus and Tehran not to mess with Israel, even if it is a single, unarmed drone.

However, in the last 2 hours, information from sources on the ground inside Syria paint a very different picture of events.

They report that the Israeli airstrike was a complete failure, that Syrian loses are very minimal with the only notable damage being a large explosion at a mortar depot near Damascus.

The Israeli airstrike was unable to penetrate far into Syrian airspace as the Israeli ECM systems failed to counter the Syrian radars, resulting in most Israeli warplanes dropping their weapon loads harmlessly over southern Syria due to the heavy fire from the Syrian Air Defenses.

The huge failure of the Israeli air strike, forced Tel-Aviv to launch another attack, however, that also failed ignominiously.

In short,  the Israeli strikeforce dropped their encumbering load of bombs and got the hell out of there, at least two of their number were hit and one of them subsequently crashed in Israel, the pilots surviving but very badly injured.

The T4 airbase was undamaged and continued to be operational, however, the Syrian airforce suspended operations so as not to escalate what is a very tense situation.

This embarrassing failure by the Israelis to bomb Syria with impunity will have very serious repercussions not just in Tel-Aviv but in Washington as well. The Israeli aircraft – F-15s and F-16s are American, the same models that are still the backbone of the US airforce; furthermore, they use the same ECM (Electronic Counter Measures) to defend themselves from missiles that the US uses, in short, the Israeli airforce has all the same goodies that the US airforce uses.

Syria, perhaps with the assistance of it’s Russian and Iranian allies has just demonstrated to the world’s air forces that they now possess the capability to successfully defeat the current US aircraft and electronics systems, something that we already strongly suspected following the disabling of the USS Donald Cook in the Black Sea in 2014.

This is a truly game changing event; no longer can Israel and the US carry on their ‘gunboat diplomacy’ where they impose their will on nations through the threat and use of airstrikes as those nations will now be able to defend themselves effectively – no wonder the Saudis were so keen to buy the latest Russian air defence systems including the S-400 missile complex.

Bullies pick on the weak and defenceless, and now the US and Israel are going to find it much, much harder to bully nations.

…and to the Senior Editor:

Sources at the Pentagon tell VT that President Trump has been briefed on the Israeli failed attack.  For background, Israel has been working closely with Saudi Arabia and the US in bombing attacks on civilians in Yemen, honing ECM (Electronic Counter Measure) operations and tactics.

Israel was convinced they could attack Syria without consequence.  American military advisors totally concurred and Israel moved forward and got their tiny little yarmuka’s stuffed up their behinds.

The Pentagon told Trump Russia did it, using S400 and S300 systems under Russian command that were, according to some sources, unconfirmed sources, relocated south to cover Israel and Lebanon.

To note, both the S300 and S400 are a difficult challenge but not beyond defeating.  Israel trained over Turkey since 2010 to operate in an S300 environment.  Their idea was to stay near maximum range of the system and at low altitude, using stand-off weapons.

The S300 missiles would burn up fuel at low levels and be out of maneuvering capability at the extreme end of their range.  That range, for the S400, however, is nearly double, more than 100 kilometers further than listed in Wikipedia.

These systems may well be under combined operational command with Russia’s regional air defense system which generally extends offshore as well, depending on naval assets deployed.

The Syrian systems, those listed as under modernization and others, are upgraded significantly and operate in a counter-ECM environment that humiliated the US in the Trump attack after the phony Khan Sheikhoun imaginary poison gas theatre fiasco.

The Pentagon wants to blame Russia but it is quite possible Syria just kicked Israel’s ass all by itself.

These events push Netanyahu to either respond with tactical nuclear weapons, and we have information that the US is aware Israel is prepared to do exactly that, or use his press assets and lie his way out of it.  The current false reporting on Israel’s attacks is evidence that Netanyahu doesn’t want to see Syria strewn with Israeli plane wreckage again.

Russian pilots, we are told, are begging to burn Israel.  Russian planes in the sector outperform the F15 and F16 by some margin and hatred for Israel runs high in Russia’s military after years of seeing Israel work closely with ISIS.

VT’s recent hack by Booz Allen Hamilton sub-contractor T#[email protected]#$k Technologies, using VA computers, has led to tracing back hacks of not just the US Navy by even attempted hacks of Air Force One and Marine One, since 2014.

All go back to the same servers, routed through Iran: 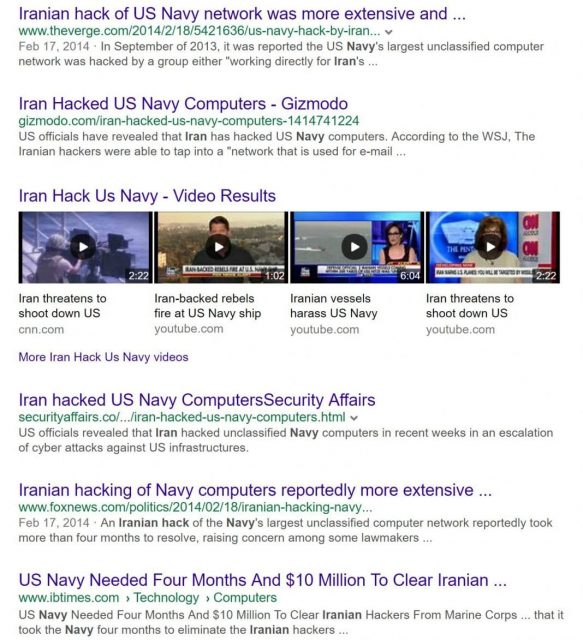 These 2014 hacks were identical to those staged over the past few days against Veterans Today, using the same servers, the same IP addresses but routed under a far more complex system than was done in 2014.

In fact, any child could and should have traced the Navy hack back to Navy contractors, in this case 3rd Fleet and 7th Fleets, Pacific organization now playing “bumper cars” with China in the South China Sea whose ships and submarines continually run into things and whose planes drop from the sky with some regularity.

We are suggesting that the Navy might want to look closer to home to find why they have a pattern of navigation failures on systems worked on by CIA contracting firms.  Any ideas?