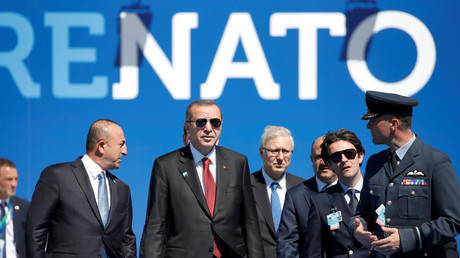 “A little earlier, one of our helicopters was shot down,”Erdogan said in a televised address on Saturday. The helicopter is reported to have crashed in Afrin area, where Ankara is conducting a military campaign against Kurdish forces, on the border with the Turkish Hatay Province.

“They will pay the price for this,” Erdogan said, without specifying who exactly was responsible for the downing of the aircraft.

Turkish Prime Minister Binali Yildirim confirmed that two soldiers were killed in the helicopter. However, he said that the cause of the crash was not yet clear. “We don’t have exact evidence or document to determine that it went down with any outside interference,” Yildirim told reporters on Saturday, as cited by AP.

The Turkish Operation Olive Branch in the Afrin region in northern Syria entered its fourth week on Saturday. The campaign followed Ankara’s promises to “strangle” the new Border Security Force (BSF) in Syria.

Earlier in January, the US-led coalition announced that it would help create the 30,000-strong BSF, half of which would be made up of the Kurdish Syrian Democratic Forces (SDF) alliance.

Ankara was angered by the fact that the main force behind the SDF is the Kurdish People’s Protection units (YPG), linked to the Kurdistan Workers’ Party (PKK). The latter is designated as a terrorist group by Turkey.

Erdogan has recently stated that once the Afrin operation is over, Turkey’s next target could be Idlib.

“We want our Syrian brothers and sisters to return to their land, and now we want to do the same in Idlib what we have done in Afrin,” he said on Thursday.

As the operation in northern Syria continues, Turkey, a NATO member since 1952, now seems to be straining the patience of its allies. During the first week of the campaign, Germany froze all decisions on supplying weapons to Ankara, including upgrades to the German-made Leopard tanks currently used by Turkey.

Earlier this week, the French president and foreign minister warned Ankara against the invasion and accused it of “adding war to war” – albeit in interviews, not official statements.

Ankara’s operation in Afrin has also caused serious tensions with its major ally, the US. Washington later said it would cease providing military aid to the Kurds. The US’ arming of the Kurdish Forces – especially the YPG – has been repeatedly slammed by Turkey.