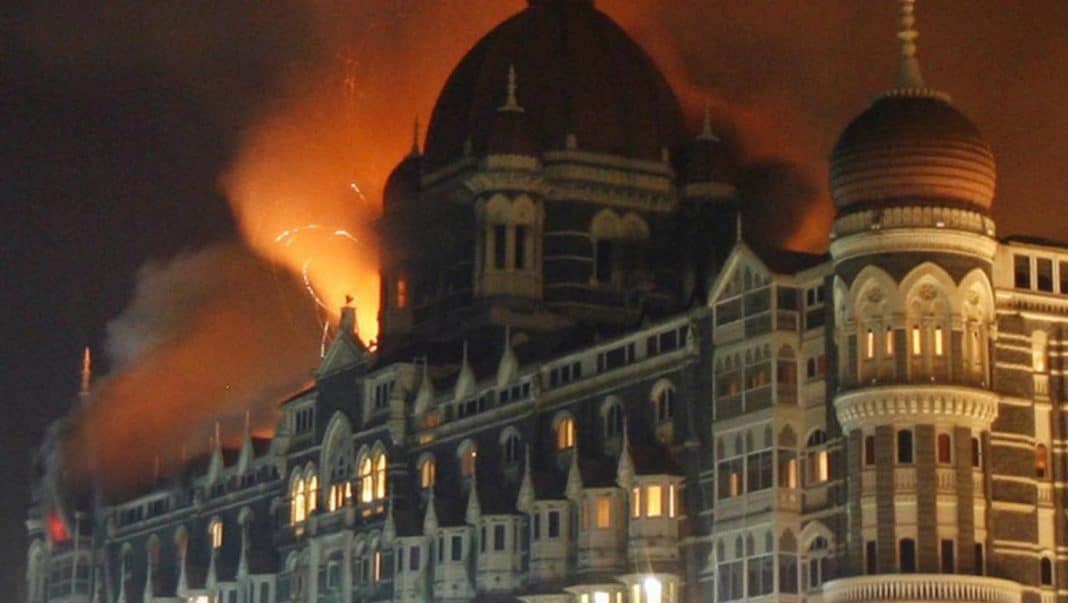 After the false flag operation in Mumbai on November 26, 2008, India blamed Pakistan, ISI and Hafiz Saeed led Lashkar-e-Taiba for the attacks, and suspended composite dialogue with Pakistan that had been renewed in February 2004 as a consequence to Indo-Pakistan peace treaty and a commitment to resolve all disputes including Kashmir issue through talks.

Since then, India pushed aside Kashmir dispute and made terrorism as the core issue. Without providing any proof, it forced Pakistan to arrest and punish the alleged culprits involved in Mumbai attacks. In fact, India cleverly built a narrative of terrorism against Pakistan from the time of engineered terror attack on December 13, 2001 in which the Indian Parliament in New Delhi was attacked by a handful of terrorists. After blaming Pakistan and Jaish-e- Muhammad, India deployed its entire military strength along its western border and remained in confrontation mode for next ten months.

Thereon, all terror attacks in India were put in the basket of Pakistan. The purpose behind building this narrative was to get Pakistan declared a terror state and ISI a rogue outfit. Its strategic partners USA and Afghanistan substantiated Indian stance. Indian attitude became more aggressive after Narendra Modi took over power in June 2014. From August 2014 onward, Indian military has kept the Line of Control and working boundary in Kashmir sector hot and hardly a day has passed without unprovoked firing by India. Upsurge in uprising in IOK after the martyrdom of Burhan Wani in July 2016 were also placed at the doorsteps of Pakistan. Pakistan was blamed for the militants’ attacks in in Udhampur and Pathankot airbase. Militant attack on Uri military camp in April 2016 further incensed India and it started hurling threats of surgical strikes and limited war. Intruding Indian drone was shot down by Pakistan Army, while Indian submarine on a spying mission was forced to retreat by Pak Navy.

Besides political, diplomatic and military posturing to overawe and isolate Pakistan, India has also been trying to ease out Pakistan from its membership of SAARC. The 19th SAARC summit scheduled at Islamabad in November 2016 had to be cancelled due to India refusing to attend it and Afghanistan, Bangladesh and Bhutan following suit to boycott the summit.

After sabotaging the Summit, India also tried to halt the appointment of the New Secretary General, Amjad Hussian B Sial. India justified its actions by stating that the nominee had to be ratified by the Council of Ministers conference in Islamabad. Something which could not take place due to the postponement of the Summit.

Soon after the appointment of the New Secretary General in March 2017, India   hosted a meeting on March 21, 2017 of security chiefs from the seven member states of the Bay of Bengal Initiative for Multi Sectoral Technical and Economic Cooperation (BIMSTEC). The meeting was a first for the BIMSTEC group, which includes Bangladesh, Bhutan, India, Myanmar, Nepal, Sri Lanka, and Thailand. This meeting focused on terrorism, cyber and maritime security challenges facing the region. It was decided in the meeting to establish a track 1.5 dialogue forum focused on security. Given the importance of cooperating on security-related matters, it was also decided to hold such meetings annually. Pakistan was once again left out of this meeting.

Another meeting was held in October 2017 in which India again tried to push back South Asian Association for Regional Cooperation (SAARC) and attempted to boost the significance of BIMSTEC. During the meeting, Foreign Secretary of India Jaishankar referred to SAARC as a “jammed vehicle.” In an implicit reference to Pakistan, he also said that “as one country” is not, and since the other seven-nation regional grouping BIMSTEC has members that are “broadly aligned” and “articulate similar aspirations”, and are connected to the other members of the South Asian regional bloc on the key issue of terrorism, it was unlikely that the SAARC could be revived.

India has also tried to marginalize Pakistan on other forums as well. For instance, when Sushma Swaraj met SAARC foreign ministers in New York on the side-lines of the UN General Assembly session in September 2017, India’s disinterest in the summit was manifest. This added to the relegation of the entire organization. With India-Pakistan bilateral relations on the slump, the domino impact on the South Asian body has got worse.

During her speech, Swaraj did not refer to the doubts surrounding the SAARC Summit, but emphasised the pre-eminence given to the removal of terrorism which in implicit terms was actually taking a dig at Islamabad: “Regional prosperity, connectivity and cooperation can take place only in an atmosphere of peace and security. It, however, remains at serious risk in the region. It is necessary for our region’s survival that we eliminate the scourge of terrorism in all its forms, without any discrimination, and end the ecology of its support.”

On January 2, 2018, India excluded Pakistan from the list of SAARC member countries with which it will be connecting its state-of-the-art National Knowledge Network (NKN) for sharing scientific databases and remote access to advanced research facilities.

NKN will outspread global research and education networks to six SAARC member states — Afghanistan, Bangladesh, Bhutan, Maldives, Nepal and Sri Lanka. Pakistan is the only SAARC nation that has been left out of this venture.

NKN is a multi-gigabit pan-India network which enables the development of India’s communications infrastructure, kindles research and creates next-generation applications and services. This new initiative will facilitate collaboration among researchers from different educational networks such as TEIN4, GARUDA, CERN and Internet2. It also allows sharing of scientific databases and remote access to advanced research facilities.

It is obvious that it is not Pakistan that is creating hurdles in the way of successful implementation of SAARC’s agenda, but in fact it is India which is trying to isolate Pakistan by using underhand tactics. India has used terrorism as a basis for suspension of official talks with Pakistan due to alleged terrorist attacks launched by groups from across the border. The strain in relations has spread out to other sectors such as research and scientific development as well – something, which adversely affects the entire region.

On the issue of terrorism, it is again very clear that it is not Pakistan which is sponsoring terrorism. On the contrary, it is India funding radicalization in South Asia – especially in Pakistan. The Indian spy and terrorist Kulbhushan Jadhav is a prime example of this.

India should also realize that it is not the only country in SAARC that can dominate all the other members. Instead, Delhi should remember the agenda of regional cooperation on which SAARC was formed and countries should use this forum for regional cooperation, not for rivalry. SAARC should not be the organization to prolong the rivalry among regional states, rather it should serve for greater regional cooperation and economic integration. If the region is thrown into negativity, India will suffer along with the others as well. This is something Delhi needs to keep in mind. After all, what goes around comes around. India must also not forget that CPEC has taken off and sooner than later, SAARC members will gravitate toward this profit making project and leave India which is opposed to CPEC in a lurch.

The writer is a retired Brig, defence analyst, columnist and author of five books. [email protected]