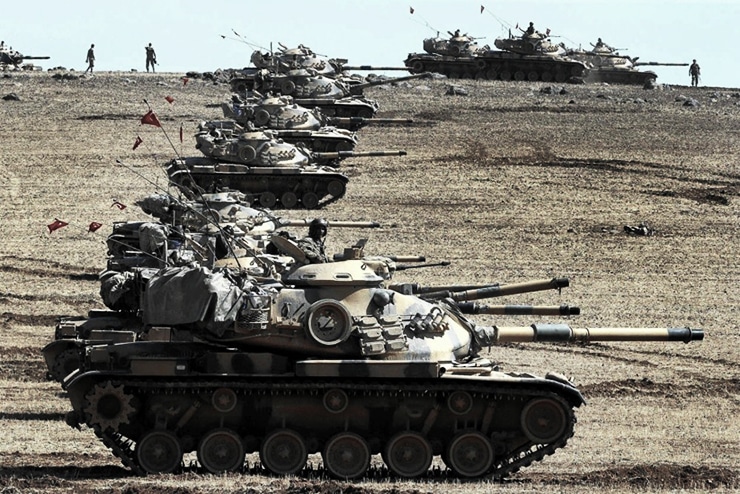 [ Editor’s Note: We have not heard a word of explanation from Russia or Iran as to why they have not been more outspoken about concern over Erdogan’s public proclamation that he wants to create at least a 20km “buffer” along the Northern Syria border.

That in itself is not so bad. The problem comes in when he wants to have it “inside Syria”, when one would expect him to mean a 20km buffer inside Turkey. He already has been building a long concrete panel “buffer” along the actual border for several years now.

While Erdogan can claim he totally supports Syrian territorial sovereignty, those are hollow words as the US can claim the same thing, but neither have been invited. Turkey has long supported Syrian insurgents, including terrorists inside Syria, so in a way one could say that the US followed Erdogan’s lead.

And as the US now claims that it will stay, basically until it feels the situation warrants leaving, your classic blank check of “We are staying to not admit defeat here and to prevent Assad from having his victory.”

Even though Erdogan has said he will leave when Turkey has accomplished his security task, his past record shows that you cannot take anything he says to the bank. One arranged bombing inside Turkey by his own security services and he would call the promise off.

Mr. Sheikh’s analysis poses that Iran views Turkey’s involvement in NE Syria as a positive move as it counters US influence with the Kurds in that critical area.

By that I mean Erdogan would have a cork in the bottle for a Saudi pipeline being laid through western Iraq to the Med via a deal made with the autonomous Kurdish government, dreamed of by the SDF, with the US carrot of maintaining bases there.

Let us not forget that Erdogan said he wanted a “anti-Kurdish” terrorism buffer along the whole northern Syria border, which would come in direct conflict with the US’s announced 30,000 man force it has planned, again without including Damascus in the decision.

The US is acting literally as the thug in the war. Others who have done similar scams have been routinely vilified by Washington as aggressors, but who now wears that shoe with no apologies.

Sadly, too many Americans seem to not be bothered at the long term consequences.  The US aggressive, colonialist foreign policy, is rarely an election campaign issue that even gets polled, much mentioned by contenders.

I do agree with Sheikh’s view that Iran has kept low key on the Turkish intervention in return for silence from Erdogan at Sochi that Assad must go, or anything about Iran leaving. Although Tehran has said it will leave when asked by Damascus to do so, that obviously can be read as they are willing to stay if the Syrians want.

And why shouldn’t they when we clearly see the Western coalition launching new attacks on Syria? The Americans have 700+ bases where they have been invited to stay, and it has never asked for anyone else’s permission.

So who gave the US or Israel veto power on other their fellow UN member states’ choice of allies? US media never touches these inconvenient conundrums … Jim W. Dean ]

While Turkey’s ‘Oliver Branch’ operation did invite an initial expression of “concern” from the Iranian officials, this expression has ever since then turned into a silent consent, followed by continued Turkish-Iranian co-operation in Syria, evident from their participation in Sochi Congress on Syria and their agreement on keeping Syria’s territorial unity intact.

While Turkey’s offensive in Syria and the fact that Turkish supported factions in the Syrian opposition continue to have presence on the ground remains a legitimate cause of concern for Syria which sees in Russian-Iranian acquiescence a possibility of these groups’ permanent presence, the broader understanding reached at Sochi has—yet again—shown that preservation of Syria’s territorial integrity remains the goal of these talks.

Importantly enough, in the idea of preserving territorial integrity is also implicit the idea of re-establishing Syrian sovereignty to areas that remain to-date outside its purview, and these areas include places where Turkey has its own presence and is busy driving the Kurds out.

While these aspects plus Russia’s extended rapprochement have directly worked to pacify Syria’s otherwise loud and clear warnings to Turkey, these developments have also directly worked to make Iran’s opposition to Turkish incursions a lot more nuanced than it could have otherwise been.

There is also little gainsaying that Iran also shares Turkey’s concerns vis-à-vis Kurds and how the US plan to establish a ground force, 30,000 strong, consisting largely of Kurds, which can be used to thwart both Iranian and Turkish interests in the region.

And while Syria has a history of co-operation with Kurds, evident from the fact that prior to his capture in Nairobi in February 1999, the PKK leader Abdullah Ocalan was based in Syria for 15 years, this seems to have changed as well. The on-going conflict has considerably changed the pre-war regional configurations.

Syria, along with Iran, seem to a have realized that it was one thing to support PKK inside Turkey prior to the war and it is altogether another thing to allow PKK now to establish its own territorial semi-independent zone inside Syria. The game has changed now.

While these aspects explain the recent convergence of interests between the erstwhile regional competitors, Iran’s silent consent is also a result of its need to win a NATO ally to its side and thus weaken the US’ ability to hurt its interests.

The question that the Iranian policy makers seem to have been paying attention to is: can the US’ anti-Iran strategy work as effectively as it could otherwise if the US-Turkey relations become hostile?

That is to say, deterioration in Turkey-US relations seems to be working directly to Iran’s disadvantage, and by silently consenting to Turkey’s offensive in Syria, Iran is simply allowing the US-Turkey deterioration to increase and exacerbate into a true crisis of relations.

This is how Turkey’s offensive against the Kurds works directly to Iran’s advantage: by driving the Kurds beyond the Euphrates, Turkey has damaged the prospects of a long term US presence in Syria.

Now, while a long term US presence would have meant a security guarantee for the Kurds, something that Ankara doesn’t wish to see happening, it would have also meant the beginning of a sustained US campaign to limit and roll back Iranian presence and influence in Syria; hence, Iran’s silent consent.

There is by now hardly any doubt that the linchpin of the US’ new Syria strategy in the post-ISIS era is containment of Iran. As a matter of fact, it was only very recently that the US Secretary of State Rex Tillerson was reported to have framed the US military presence in Syria as primarily aimed at countering Iranian influence in the country.

As such, with Iran being fully mindful of the new plan, there is little to disregard that it is now aiming at securing operational and strategic outcomes which counter hostile US plans.

And in this context, facilitating Turkish integration into Iranian and Russian alliance is a win-win situation for Tehran. Iran’s silent consent seems to be capable of yielding, at least in Iranian policy makers’ calculations, two major results: 1) It will weaken the US ability to influence Syria’s ground situation, 2) it will also pave the way for breaking Turkey’s commitment to Syria’s opposition.

While this opposition has already been neutralized, these groups remain a nuisance for Syria and Iran to deal with and accommodate in the future political and constitutional framework of the country.

Therefore, it is not wrong to say that by altering their erstwhile and pre-war policy vis-à-vis Kurds, Iran and Syria have opened their arms to embrace Turkey and take advantage of big breach in the US-Turkey relations.

In this context, it is also not wrong to say that the underlying reason for Iran’s silent consent is strategic, which might become the building block of a new regional configuration of strategic level between Iran, Russia and Turkey.