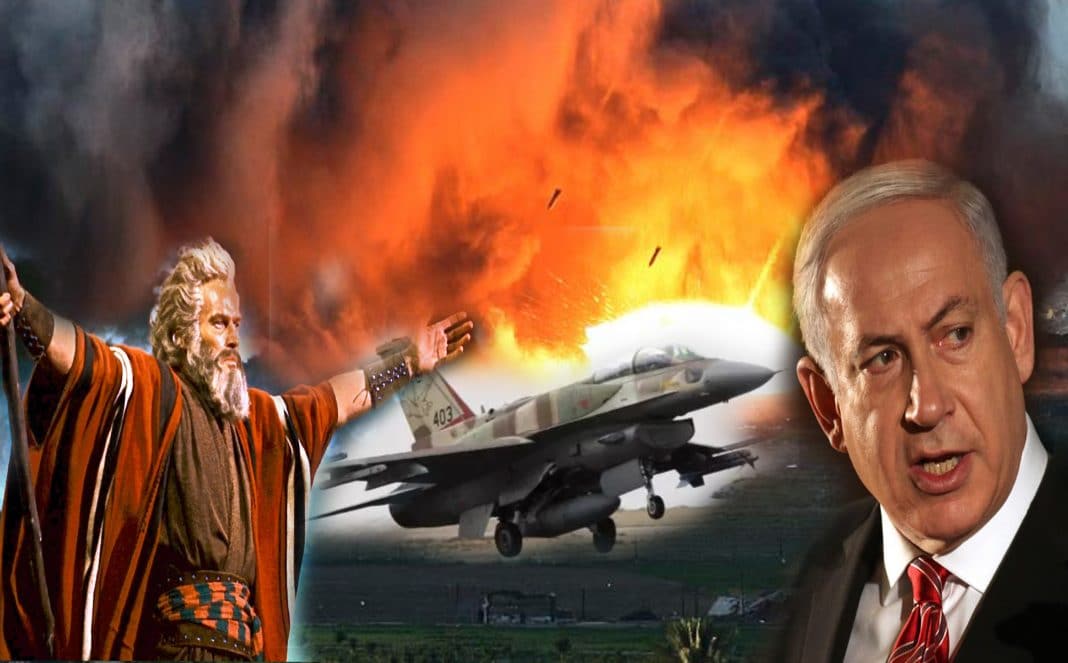 The Jewish timeline is a peculiar one-sided anti-historical narrative that inevitably begins at the point when Jewish suffering is detected and ignores the prior circumstances that may have led to that suffering. In Jewish history, the members of the chosen tribe are never the aggressors nor do they bear any responsibility for their own plight. Quite the opposite, they are always the victims of Goyim’s ‘irrational’ and ‘merciless hatred of Jews.’

In his address following the incident in which an Israeli  F-16 was shot down over Syria, Netanyahu focused on Iranian aggression, alleging that Iran had flown a drone into Israeli territory. Naturally, yours truly is not convinced that such a drone really existed and if it did, that it was operated by Iranians. However, the Israeli PM clearly inveigled to omit from his narrative that it was he, his hawkish government, and their satellite Jewish lobbies around the world (AIPAC, CRIFF, CFI, LFI etc.) that have been crusading for military action and sanctions against the Islamic republic for at least a decade.

How many times have we heard Israeli politicians vowing to attack Iran?  In 2012, The Time of Israel reported that “Prime Minister Benjamin Netanyahu and Defense Minister Ehud Barak ordered their security chiefs in 2010 to have the military ready to attack Iran’s nuclear facilities within hours if necessary, but were rebuffed by the security chiefs.”  Nonetheless the timeline Bibi presented yesterday  expunged the decade of Israeli belligerence toward Iran. Bibi’s timeline of the conflict with Iran began 48 hours before when, he claimed, an alleged Iranian drone allegedly crossed the Israeli border.

This unique form of delusional and/or duplicitous detachment from reality was not invented by Zionists or Israelis. It is deeply embedded in Jewish culture, Jewish ideology and even the Old Testament. The holocaust, for instance, is taught as “the systematic, bureaucratic, state-sponsored persecution and murder of six million Jews by the Nazi regime and its collaborators” (USA Holocaust Museum). This is a narrative drained of any historical context. The timeline of the holocaust is a Judeo-Centric construct that begins with the detection of Jewish suffering (1933). For the holocaust to become a proper historical chapter, it will be necessary to ask ‘what were the circumstances that led to the sharp rise in anti Jewish feelings in Europe and beyond?’*

Again, if we examine Jewish history of the 19th century East European pogroms, or the Spanish inquisition we find a timeline that is driven by a similar dismissal of historicity. As in the Jewish history of the Holocaust or in Bibi’s address yesterday, these timelines begin at the point Jewish suffering is detected and omit the circumstances that may have led to such developments. We are dealing with narratives devoid of their most vital element, their rationale. We witness an eternal struggle to suppress self-reflection.

All of this may explain the Jewish fear of Anti Semitism. The Jewish anxiety is not necessarily the fear of the ‘merciless and hateful goyim’ but more probably a fear of self-reflection – looking in the mirror – taking responsibility for one’s own actions once and for all.

The Jewish timeline as a form of self induced detachment is as old as the Jews.  Let’s examine the manner in which Pharaoh is introduce in Biblical Exodus:

“Now there arose up a new king over Egypt, which knew not Joseph. And he said unto his people, Behold, the people of the children of Israel are more and mightier than we: Come on, let us deal wisely with them; lest they multiply, and it come to pass, that, when there falleth out any war, they join also unto our enemies, and fight against us, and so get them up out of the land.” (Exodus 1:8-10)

While King Pharaoh is clearly performing anti-Jewish feelings, there is a notable lack of any context that would make this narrative truly meaningful. In what sense were the Jews ‘mightier’? Why were they suspected of treason, did they keep dual citizenship? Were they dominating the city or its culture? Or maybe, was it the very early Egyptian film industry which they dominated? The Bible keeps this information to itself.

I suggest that perhaps the Jewish timeline is a sophisticated blindfolding mechanism that is set to deny Jews the ability to self-reflect, to see reality for what it is, to see the other as an equal human being with equal needs.

Judaic thought has occasionally been aware of itself as a castrating  mechanism. The Biblical prophets, for instance, had flashes of such self-reflection. They introduced a timeline, a reason, a logos or shall we say a rationale, but in that they were defeated time after time. The same can be said of Jesus, Spinoza and Marx.

This makes it  astonishing that Early Zionism was actually a desperate Jewish attempt to address the Jewish denial of historicity. Bernard Lazare’s Anti-Semitism its History and Causes presented a profound Zionist study of the role of Jews and their culture in their own suffering. Lazare wasn’t alone in his inquiry. Ber Borochov, Max Nordau and even Herzl attempted to understand the Jewish question within a proper historical context. Their diagnosis of Jewish Diaspora culture was astute, however, their remedy has been pretty much a disaster as Israel’s horrendous politics have demonstrated for the past seven decades.

While early Zionism was largely anti Jewish, Zionism was soon hijacked by Jewishness – that sense of delusional judeo-centrism that dismisses otherness and denies historicity. PM Netanyahu’s address illustrates this unique inability to self reflect. Netanyahu’s timeline begins with an alleged act of Iranian aggression and yet ‘forgets’ that Israel has been throwing bombs at Syria for years and threatening to attack Iran for a decade. Is Netanyahu delusional? Is he duplicitous? That is not for me to judge, and in fact, I don’t care. My task is to decipher the message, not to analyse the messenger.

If Zionism was born to teach the Jews how to self reflect so they could become ‘people like all other people,’ Netanyahu, Israel and contemporary Zionists are the proof that the Zionist project was futile. As the Jewish State surrounds itself with ever more walls of separation, as the Zionist lobbies and Zio-cons push for more global conflicts for Israel, it becomes clear that Zionists are actually people like no other- people who can’t self reflect or bear responsibility for their own actions.

* The Jewish historian David Cesarani made such an effort in his last book, ‘Final Solution’ admitting that Holocaust history has been problematic and lacking.