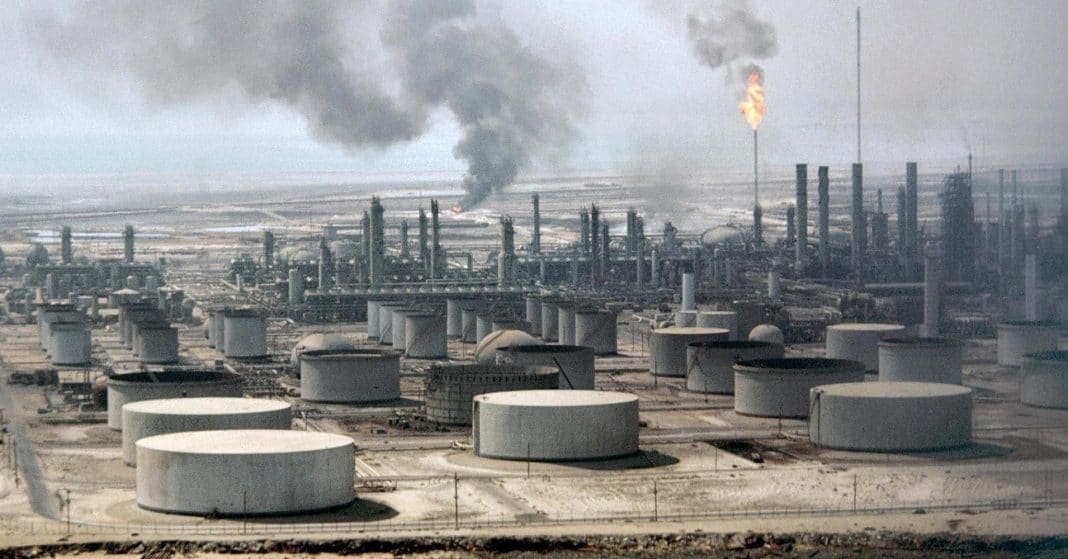 [ Editor’s Note: We have a lot of intrigue going on in the Persian Gulf, with major players at odds with each other over the proxy terror war on Syria, but where surprisingly that presents no problem in joining together in long term economic partnerships.

Russia can build nuclear plants in Iran, with the Saudis hating them; and Putin can still offer S-400 missiles to the Saudis that could be used against Iran. If there is a consistent policy here, it escapes me.

What I see is the age old conundrum where, when there are competing interests on many levels, the money interests are always at the top. We see this in America’s faking security threats as a smokescreen behind which the Deep State can keep defense contracts humming along, despite no one exhibiting a feasible security threat.

And yes, the Saudis are always playing East and West off each other – an old game. With Israel and Washington using the Iran bogeyman as a magnet pulling the Royals closer to them, and with Israel now publicly in play in that arena, the rest of the Arab world sees they have been played for chumps by the Saudis, but they did get paid for it.

There are also sanctions repercussions in all this. If the US puts more sanctions on Russia and maybe China too, does it expect the Saudis to not do business with them? Can the US muscle the Saudis not to buy the S-400s, as it did recently with Qatar, which backed out of the deal?

This is all challenging for the public to follow, especially with so much fake news disinfo, with much of it coming from the governments themselves. I don’t see any change in this on the horizon any time soon… Jim W. Dean ]

Hidden by the fog of the ongoing oil market volatility and the Turkish adventures in Syria, OPEC leader Saudi Arabia has been cementing its geopolitical position for years.

In Riyadh meetings this week between Saudi and Russian officials, major energy deals were sealed, changing the regional constellation dramatically. At the same time, the geopolitical shift of the century now starts to bear fruit.

Russia has directly offered to invest in the upcoming Aramco IPO, supporting the efforts of Saudi Crown Prince Mohammed bin Salman (MBS) to diversify the economy of the kingdom. During the meetings, not only new Saudi investment deals in Russia were sealed, but also the commitment of several Russian investment parties in the Aramco IPO.

After weeks of receiving a hell of a beating in the press (analysts started to doubt that it would ever happen), not only positive news has come from the NYSE and LSE, but also — as expected — from Russian institutions.

Kirill Dmitriev, CEO of the main Russian sovereign wealth fund, Russian Direct Investment Fund (RDIF), stated in Riyadh that he expects that a Russian and Chinese joint investment fund, working in conjunction with several major Russian banks, will be part of the Aramco IPO. He also indicated that other Russian financial institutions and investors are very interested to take a part of the 5 percent of Aramco being offered in the IPO.

These statements are a significant boost for MBS and his IPO advisors, as the participation of a Russia-China investment fund also shows the interest of Chinese parties in the stakes. While Chinese parties are expected to be willing to hand over tens of billions, Dmitriev’s statements have widened the scope. Russian and Chinese parties will not only involve the expected oil and gas companies, but others as well.

In addition to the Aramco IPO, the warm relationship between Moscow and Riyadh, already displayed in the current production cut agreement between OPEC and non-OPEC, now also reaches a level targeted by Putin and MBS last year: a full-fledged investment relationship focusing on the Russian oil and gas sectors, including LNG. The latter has been likely to happen since mid-2017.

Russian sources close to the Kremlin stated to the press that Saudi Aramco, which was already invited before to take part in LNG projects in Russia, will enter into a major investment scheme for Arctic LNG-2. Last year, Saudi Energy Minister Khalid al-Falih said that Aramco was invited to invest in the Novatek-led venture.

It could be a slip of the tongue, but al-Falih stated at the same time that [this investment deal] would become a part of Aramco’s gas strategy. With a targeted capacity of 18 million tons per year, the project is expected to be onstream in 2023.

The IPO and Artic LNG-2 news partly overshadowed the fact that other major energy deals were also made. Dmitriev told the press that the RDIF, Saudi sovereign wealth fund Public Investment Fund (PIF) and Aramco will soon sign other investment deals.

One of these other deals is investment in Russia’s Eurasia Drilling, a major independent driller. It’s a dream come true for Russian drillers, as they’ve been vying for on- and offshore drilling projects in Saudi Arabia for years, but without success. Even attempts by Putin-linked Gazprom Drilling to enter the Saudi market haven’t been successful until now.

The creeping-yet-steady cooperation between the former adversaries should be continuously assessed. Even though several Russian oil oligarchs have said that they see Russia soon leaving the OPEC deal, current investment discussions block any hasty decisions.

Russia and Riyadh also have other common interests, mainly related to regional Gulf-based issues, such as Syria, Iran and Iraq. The opening offered by the young Saud Crown Prince MBS is valued by Putin, as it gives Moscow a direct inroad to oil and gas market price setters, while also undermining the historical US dominance in the region.

Since oil and gas are linked to stability or war, the current Russian-Saudi cooperation is also based on these different angles. Energy cooperation will be linked or intertwined with future security arrangements and defense contracts. Aramco’s IPO, LNG and OPEC are paving the way for a possible bearish position in the Kingdom of Oil.