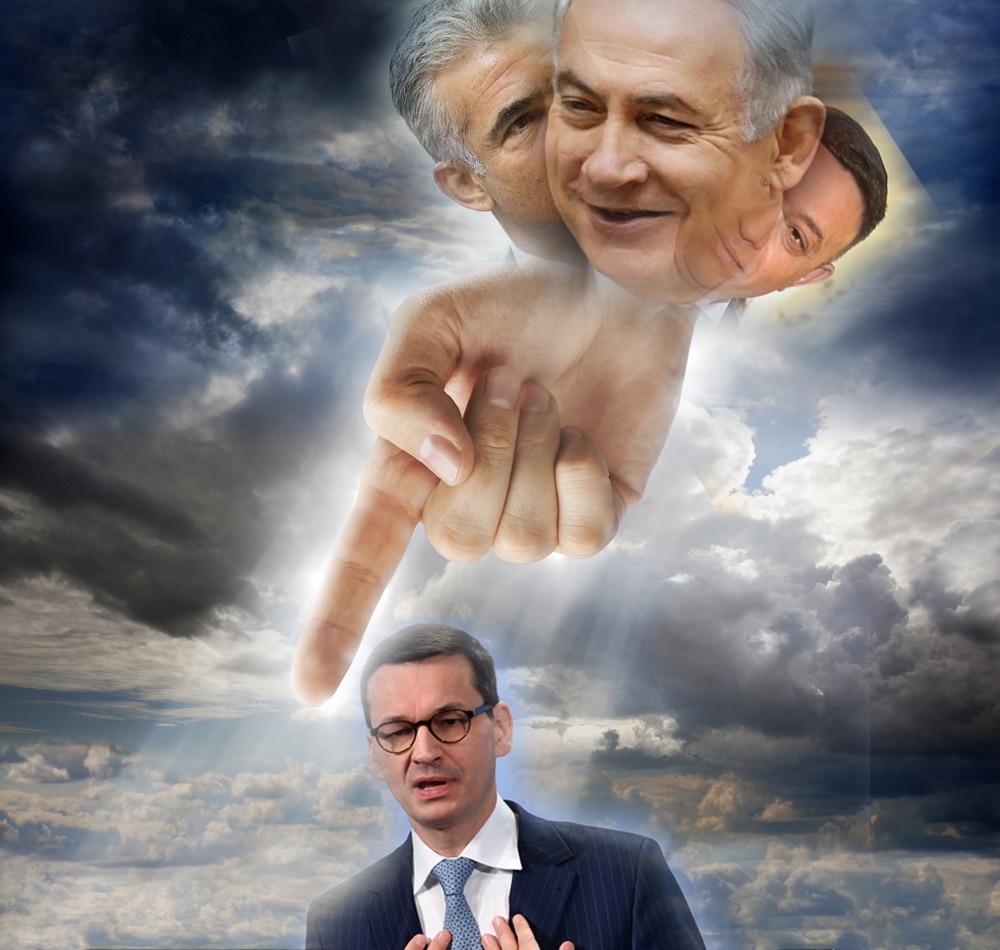 On Saturday Polish PM did it again, he told the truth. He suggested that there were also Jewish perpetrators of the Holocaust.

In PM Morawiecki’s eyes the Poles were also victims of the WWII, “Many of you,” Morawiecki said,  “have probably heard about the Lidice village in the Czech Republic. In Poland we had 800 Lidice — 800 villages completely annihilated, exterminated by German Nazis.”

The Israelis are really upset by the Polish PM’s attempt at truthfulness. Morawiecki’s attitude crudely interferes with the primacy of Jewish suffering. The idea that a democratically elected goy leader thinks independently and authentically is, apparently, as hostile to the Israelis as a war declaration. Yesh Atid Chairman Yair Lapid said Israel’s ambassador to Poland should be recalled immediately in response to Morawiecki’s comments.

Israeli Labor Party leader Avi Gabbay insisted that Morawiecki “spoke like any other Holocaust denier.” Gabbay added that the “the government of Israel has to be a voice for the millions of murdered and strongly denounce the Polish prime minister’s words.”

This is indeed a new and refreshing development in Jewish nationalism. Israel isn’t anymore just the state of the Jews, it is also the voice of the dead Jews. I guess that we should start to consider a three state solution. One for the Palestinians, one for the Jews and one for the dead Jews.

On the face of it seems as if Lapid, Netanyahu and Gabbay are participating in an open contest. Each one of them attempts to perform the ultimate form of delusional psychosis. Lapid calls the Israeli Ambassador to return home, as if a war has embarked between the two states.

Gabbay takes upon himself to become the voice of the dead Jews. In fact Netanyahu seems slightly more content than his political counterpart. One may wonder, why Israeli leaders compete each other in being psychotically delusional? Presumably, because in Israel psychotic behaviour translates into votes.

It has been accepted by many Israeli and Jewish scholars that the Holocaust is the most popular contemporary Jewish religion. Jews, so it seems, believe in many things that are often contradictory but all self-identifying Jews believe in the holocaust. The next question is what is it in the Holocaust which makes it into such a popular religion?

The Shoa is a Jewish victorious narrative. It is a story of a lethal plan to destroy the Jews that ends-up in a great Jewish victory, a spiritual revival and military empowerment.

The Old Testament points at similar Biblical narratives. Like Hitler, the Pharaoh also wanted to destroy the Jews however,  Exodus’ God interfered and saved his chosen  people inflicting on Egypt ten devastating plights that made contemporary WMD warfare look like a friendly adventure. The Book of Esther also brings to light a similar story. An attempted genocide by the Persian king is averted.

Eventually it is actually the Jews who massacre their enemies en-mass. This vast killing narrative made it into Purim, the most Joyous Jewish holiday.  Like in The Book of Ester, In the Holocaust religion the Jews resurrect themselves without the help of God. Not only have Jews been saved, they even managed to build a Jewish national homeland on the expense of the indigenous Palestinians.

In the holocaust religion, therefore,  ‘the Jew’ is the new Jewish God. The Holocaust religion, as such, is the final and ultimate stage in Jewish narcissism for ‘the Jew’ is the Jew’s saver. We are dealing with an auto fulfilling self loving mechanism. This is exactly why Lapid, Gabbay, Netanyahu and other Jewish leaders around the world are performing such an irrational shameless tantrum in reaction to the new Polish history law.

The new Polish history law interferes with the Jewish grandeur. It breaks the narcissistic binary dichotomy between good and evil (Jew vs. Goy). The Jews are no longer the ultimate victims and the Goyim aren’t the ultimate evil. In the eyes of Morawiecki, the Poles suffered as much as the Jews, their country was minced to pieces. And just like the Jews they also recovered, they even want to emancipate their past.

The Polish new history law is an attempt to humanise modern European history. It universalises suffering. It strips the Jews of their blind sense of victimhood. It makes WWII into an historical event subject to open scrutiny. It doesn’t deny the past. It, instead, denies the prospect of Jewish narcissism.