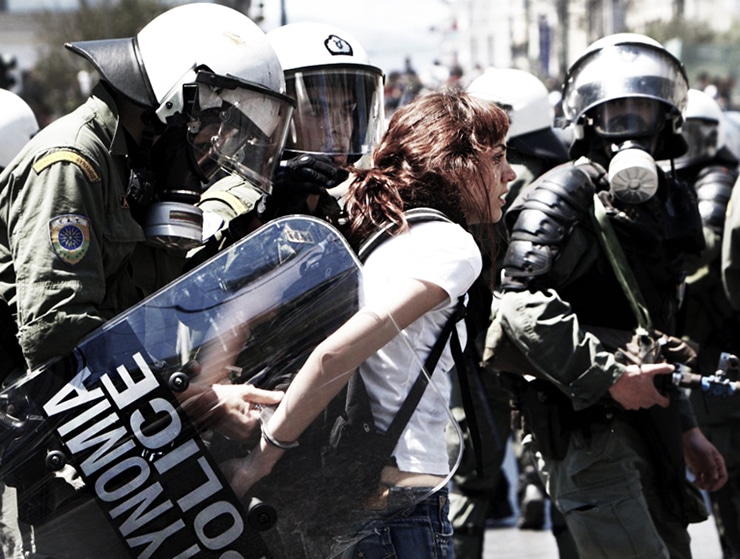 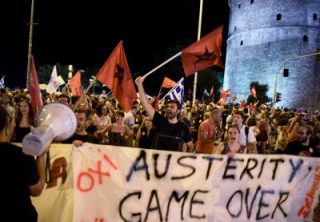 [ Editor’s Note: Phil has a chilling piece for us today, currently number three at NEO. I chose this for today as Greece has fallen off the radar in the West, the US particularly, so one assumes things are ok. Not!

Phil describes how austerity is devouring the country, as it was intended to do. If you read between the lines, you will see a new NATO, a subversive one that can create destabilization as a ruse for interceding in a particular country.

And to deflect any backlash from this, they have brought the Madison Avenue advertising wordsmiths to do their magic. They devised removing the “intervention” term and replacing it with something more user-friendly.

Would you believe “Stability Policing”? Phil doesn’t do satire as many of us sometimes do here at VT, so I knew he was not kidding.

So what we have now is the banksters can take countries down by burying them in debt, thus making then ripe candidates not only for asset fire sales, but also for creating “unstable” conditions for the NATO police to come in to make sure any opposition can be snuffed out under a “police action”.

Isn’t that special? You just can’t make this stuff up. Phil hasn’t, and neither did the Greeks. Our prayers will be with them … Jim W. Dean ]

Last week a few hundred thousand Greeks raised their fists in protest in the streets of Thessaloniki. That protest, and an even larger one in that followed in front of Greece’s parliament in Athens tell us EU imposed austerity has gone too far.

These protests were ostensibly opposition to a compromise on the part of the Greek government regarding the Macedonia name dispute.

However, the reality is both foreboding and promising at the tame time. This report should astound most readers with the level of financial, military, and intellectual terrorism being exacted on a noble people.

In a previous report for NEO I outlined how Macedonia (FYROM) seems doomed to become just another NATO satrap, another missile launch site in the new Cold War of Washington.

NATO wants the former Yugoslav republic to get a name change before the generals start picking spots for bases. Meanwhile, in Greece the people are years past fed up with being sold out at ever turn by the radical left SYRIZA led government.

This, after Prime Minister Tsipras’ coalition government ignored the 2015 protests and went ahead with crippling austerity measures imposed by the Germans, the EU, and the IMF, leaves even the most liberal Greeks wobbling to the right.

Reports from Thessaloniki suggest the Macedonia “name thing” is really a secondary consideration for most protesters. The hint of upheaval comes as Greeks face numerous other difficulties in the midst of an economic crisis that has been ongoing since 2010.

Speakers at the rallies, and many participants as well, spoke out against austerity, forced home foreclosures and seizures, privatizations, and a host of other policies that the current government promised to oppose. Or in other words, broken promises and outright lies from SYRIZA.

As further evidence of a shift, Sunday’s rally in Athens featured Greek composer and cultural icon Mikis Theodorakis, who has been widely associated with the Greek left.

Michael Nevradakis over at MintPress News explains the hard truths of a SYRIZA led government adored by the IMF and Germany, and one now testing the resolve of the Greek people. His analysis of the whole Greek debt affair matches my own.

This economic downfall seems orchestrated, rather than some quirk of Wall Street economic conditions. Greece is “for sale” basically, and the banking pirates seem to care less how many Greeks rise up in protest.

And this is a dangerous miscalculation. Almost every Greek I talk to here on Crete now realizes, that barring some truly radical change, Greece will in no way be able to absolve itself of austerity and international financial oversight for the foreseeable future.

The sellouts of the SYRIZA-led Greek government are busy basking in the fake-glory of a supposed economic “success story” and Greece’s supposed exit from loan agreements with lenders. However, the sale of Greek assets to foreign entities, pension disasters, and the crippling taxation that every Greek shop owner faces will not go away anytime soon.

The people are already crushed, with only Greek attitude and pride propping them up. This is the reality. Nevradakis’ story is spot on, revealing the “fire sale” and robbery going on at the expense of Greeks where a recent bond sale and astounding interest rate went unmentioned by mainstream western media:

“…the bond yield (interest rate) of 4.625 percent was not only much higher than that of other crisis-hit countries in Europe, but higher than or comparable to that of such economic superpowers as Vietnam and Botswana.”

Botswana indeed, the Greek people are being treated with utter contempt in my view. Please read this watered-down Reuters report on a recent bill that allows the government to seize people’s assets overdue loans and arrears to the state, for restructuring family benefits, and for making it harder to protest.

In this case the Tsipras government sold out the Greek people for €6.5 billion euros in bailout loans in the final bailout from euro zone finance ministers. If we examine the history of Greece’s bailout woes a couple of things become blatantly obvious.

First, the failures of the Greek leadership at every level stand out as the cause of the country’s woes – and things seem to be getting worse instead of better. As an example, a 2016 Transparency International’s annual report showed that Greece 69th among 176 countries in combating corruption, down 11 spots from 2015. Despite what Brit and German newspapers tell us, the problem is not Greek shopkeepers and tube riders skirting taxes that is the problem.

The “westernized” stories of Greece’s circular tax problems leave off the fact U.S., German, and UK citizens “tweak” their civic obligations as well. Everybody in Central Europe wants to lay the blame for Greek problems on the little guy – when the rich predators of Europe have always been the problem.

This Tufts University (PDF) paper tells us of a corruption hamster wheel, but the author does not moderate with comparatives. A 2011 book by Jason Manolopoulos entitled; “Greece’s ‘Odious’ Debt: The Looting of the Hellenic Republic by the Euro, the Political Elite and the Investment Community,” frames the real picture.

Secondly, the history of Greece’s economy since 1960 holds many clues as to how and why Greeks suffer so now. Without a complete history lesson since the so-called “Regime of the Colonels” from 1967-1974, any Greek citizen from those times can relate the relative prosperity of the early 70s as compared to today.

I mention this junta for good reason, as the role of NATO in all things European plays a crucial role very few even take note of today. I’ll leave off discussing the roles of Britain’s Winston Churchill and America’s CIA in fiddling with Greece politics. However, it’s vital for readers to understand how Cold War anti-communist doctrine wreaked havoc on almost all of Europe.

When U.S. President Lyndon Johnson’s administration gave aid to the junta, U.S. critics of the coup included then-Senator Lee Metcalf was critical of America providing “military regime of collaborators and Nazi sympathizers.” The deplorable legacy left Greeks by U.S. interventionism will never be fully understood, but the role of NATO as an occupying force on society is my point here.

Uprising, civic dissent, and how the EU became a perfunctory police state are not issues you’ll hear debated in the EU parliament, now are they? And what if the mission of NATO is less about defending against a common European external enemy like Russia, and more about a liberal world order police action?

This policy document from NATO tells us the real reason behind Greece’s NATO ascension, and the coming integration of the Former Yugoslavian Republic of Macedonia (FYROM). And I quote:

“The need for the NATO to be endowed with a military capability of civil police clearly emerged during the SFOR operation in Bosnia and Herzegovina.”

Stability Policing (SP), as NATO terms interventionism, is the deterrent and the method of mediating undesirable change in all of Europe, and nowhere is this a more critical deterrent than in Greece and on the borders of eastern Europe.

Reading these documents I am reminded of SS and Gestapo missions in occupied countries during WWII. And for those readers who believe I am delving into conspiracy theories, please read from the most recent NATO summit in Romania.

“Several efforts are underway to help meet the law enforcement gap at the international level. The UN, the OSCE, the EU are all working in various ways to generate the capacity to deploy units of civilian police on short notice.”

Finally, we must factor all the coercive elements which have been exacted on all Europeans since the height of the Cold War. The “indoctrination” of soldiers and citizens from Poland around the frontiers of Russia to Turkey and Greece cannot be understated.

Generations have now been brainwashed and subliminally warned not to buck the NATO narrative or brotherhood. Imagine the effect of Greece’s youth having served alongside NATO brothers – the influence on the geo-political situation cannot even be measured.

The NATO Stability Policing Centre of Excellence is situated in Vicenza, Italy – and it’s crazy for me that the organization’s Facebook pages are not even mentioned alongside the social network’s evidence against Vladimir Putin’s Russia trolls.

Scan these NATO pages and discover a diabolically subversive mission to convert an Italian officer/dad, or a Romanian gendarme into a loyal storm trooper. Yes, I am serious.

In the end it’s easy to see the bigger game of hegemony operating to control Europe. Factor in one or two of my past articles about billionaire George Soros and his subversive NGO Open Society Foundation.

Take hold of the fact European academic institutions and media have been manipulated and converted for decades. And understand that the level of mismanagement and corruption from Portugal around to Ukraine is the real elephant in the Europe room. We must recognize that these systems are desirable for the lending elites too.

Imagine a Greece that is fixed and out of debt! Where is the financial win in that for a predatory Frankfurt or Luxembourg banker? I am hopeful that the average citizen here in Greece, in Romania, and all across Europe might come to recognize the real terror in this world.

That day will be telling, it is sure. But the day after will be promising indeed. Greece can start by getting her policymakers under control, and then controlling the outside interference. This is my view.