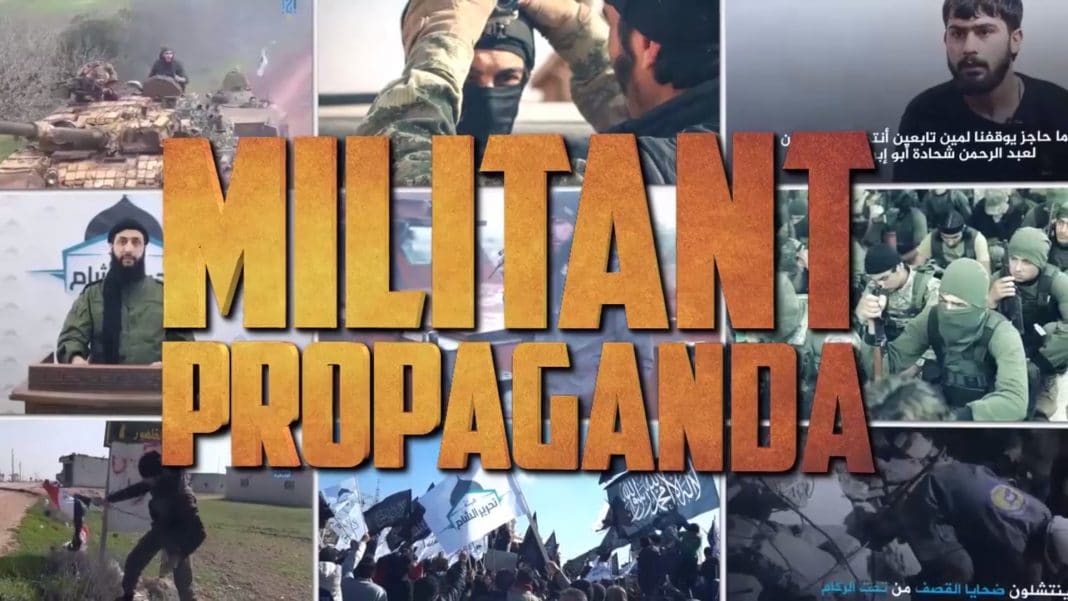 This video provides an additional look at the terrorist group’s media capabilities and propaganda efforts during the Syrian war.

This video provides an additional look at the terrorist group’s media capabilities and propaganda efforts during the Syrian war.

At the end of March 2012, “Statement No. 1” (http://aljahad.com/vb/showthread.php?t=17526) was published on behalf of a previously unknown organisation called Jabhat al-Nusra on the pro-al-Qaida website “Global Jihad Network” (http://aljahad.com) (Currently neither of these links is working).

Later it was introduced under its full name – Jabhat an-Nuṣrah li-ahli ash-Shām, and after of series of re-brandings got its current name – Hayat Tahrir al-Sham.

The original statement was written in Arabic. Subsequently a statement was written in English, addressed to potential supporters who either don’t understand Arabic well enough or don’t understand it at all. Many responded to this call for mobilization, which is indeed what it was. Not only Arabs from Jordan, Saudi Arabia, Lebanon etc. responded, but also Europeans – French, British, Kosovars, Albanians and Germans as well as Asians – Pakistanis, Uighurs, Uzbeks, etc.

Thus, we can conclude that, from that moment on, al-Qaida propaganda was spread not only in Arabic, in which the lion’s share of material continues to be published, but also in English, French, German, Dari, Pashto, Persian, Turkish and Russian.

We should note that in the statement itself there is a link to the al-Qaida site “the White Minaret” (Arab.: al-Manara al-Bayda). This is a common technique among Al-Qaida managers and supervisors: propaganda or mobilization campaigns are conducted on a broad scale, using a variety of Internet resources including the opportunities of global television.

For example, the Qatari “al-Jazeera”, which broadcasts not only in Arabic but also in English. Therefore, labeling al-Nusra as Al-Qaida is a way of mobilizing al-Qaida reservists from various countries around the world.

The very fact of this statement’s publication on al-Qaida Internet resources immediately identified al-Nusra as a division of al-Qaida. The above statement is in line with the statements of such groups and al-Qaida leaders as “al-Qaida in Islamic Maghreb”, “al-Qaida in the Arabian Peninsula”, the Somali “al-Shabab” and the “Islamic Emirate of Afghanistan”.

Currently, the official mouthpiece of the movement is the website https://ebaa-agency.com. In addition, there are a number of sites targeting audiences of one or other foreign-language country. For example, shamcenter.site, the Voice of Sham (Russ.: Golos Shama).

After another rebranding in January 2017, some rather well known media groups, such as al-Maqalaat, Fursan al-Sham, al-Fustaat, Bilad al-Sham, Life in Syria and al-Muwahideen, expressed their support for the group.

By the middle of 2017, the leadership of Hayat Tahrir al-Sham, which is based in the Syrian province of Idlib, came to the natural conclusion that its official mainstream propaganda does not meet the requirements for any of the possible criteria: efficiency, coverage and scope.

The news agency https://ebaa-agency.com published only in Arabic and was designed to work with Arabic-speaking audiences. To spread propaganda, convey their viewpoint and recruit new militants, it needed to be provided in other languages.

In connection with the formal rupture of relations between Hayat Tahrir al-Sham and al-Qaida, and with the military failures of the past two years, the group is not able to use the news resources of al-Qaida to recruit supporters.

So, for news coverage in Russian, the movement’s propagandists created a project called the “Voice of Sham”, employing a group of activists, who had previously covered events in Syria through accounts in the popular social networks.

Most of the budget for the new site was allocated to video news and stories. Initially they showed how the Syrians were coping with day to day problems and videos live from the fighting positions of the militants that support HTS ideology.

In an effort to diversify the format of the material on the “Voice of Sham” produces news videos, frontline reports and a kind of sociological surveys among the civilians of Idlib.

In fairness, it should be said that the advocates of the movement are trying to create the appearance of objectivity, sometime including in the video people who refused to appear on camera or had a positive view of life under the government.

One of the distinguishing features of the movement’s media work is its unhealthy predilection for  openly fake news. For example, in one of the video clips they show “indisputable evidence of the atrocities of the Russian invaders in Chechnya”, which in fact turned out to be excerpts from the 2014 film “The Search” by French director Michel Hazanavicius.

Articles on the movement’s understanding of Islam and a critique of traditional Sunni and Shia Islam comprise one of the key part of the group’s media content.

Besides promotional clips showing members of the HTS in military activity and reports from the scene of Syrian government “crimes”, there are videos about the peaceful activities in the areas under their control. At the same time, it can again be seen that the Idlib-based propaganda groups are at a very low level and are not capable of competing in the media environment with other more experienced or more authoritative groups. This is most likely due to problems in financing and to the absence of professional mass media workers in the ranks of the movement.

The movement has learned al-Qaida’s lesson however and seeks to enlist the support of the local population. As mentioned above, in connection with the rebranding and formal severance of relations with al-Qaida as well as the flow of volunteers from Europe, the main target audience remains Arabic speakers and immigrants from the former Soviet Union and in particular from Central Asia. It is the youth from these countries that is most inspired by the ideas of radical Islam.

This is due to domestic disorder and the weakness and corruption of these countries’ governments.

Through their information campaign on the Internet, radical Islamists seek to gain sympathy from and credibility with the local population, showing in videos how the supply of petroleum products, bread, water and electricity is returning to normal. However, it is only a propaganda tactic to gain the trust of the population.

HTS just like al-Qaida, never focused on the gradual implementation of Sharia law or building effective governing bodies in Syria. During the occupation of East Aleppo, al-Nusra organized the civil administration in just the same way as in Idlib, food and medicine were received only by the militants, civilians were persecuted on religious grounds and were subjected to corporal punishment or, worse, death.

Instead of providing a minimum of order in the territory under their control, the militants preferred to sort out their own differences, which led to bloody infighting as a result of which civilians suffer.