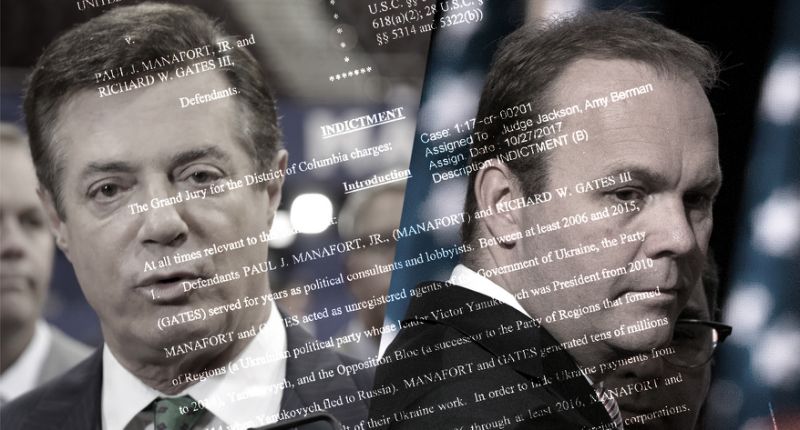 [ Editor’s Note: Mueller has sent a chill throughout the whole foreign lobbyist community, as what Paul Manafort was doing here was nothing more than what many others have done, especially those that thought they had the juice to never be targeted for prosecution due to their powerful friends and connections.

Manafort couldn’t help spending tons of money, including the expensive pad in Trump Tower, always the big no-no. Loaning money to yourself from offshore accounts… a blind man could spot that.

But there is another layer to this story, a 9-11 ripple effect one. When the FBI wanted to round up all the terrorists in the country, excluding those really behind the 9-11 scam, they had only one place to turn for manpower to boost their counter terrorism force.

That was the white collar crime division, agents accustomed to complex investigations. I remember a rough 1000-agent figure for those transferred, gutting that division. It was then Wild, Wild West time on white collar crime, especially the big business, high end lawyer designed kind. Santa Osama had come to town.

Remember how we had to suffer through the embarrassment that when there were really no sleeper terrorist cells in the US that 9-11 was supposed to unleash (other than those who really did 9-11), to justify its CT funding, the FBI was left to manufacturing terrorists via their sting operations, which is now a low point in FBI history.

The agents are not responsible. The orders came down from the top. But that said, the agents never let the public know what was really going on. They investigate cases, but do not prosecute; the DoJ does.

This loyalty confusion between the command structure and the people is never ending, the biggest example being that Israeli espionage cannot be prosecuted here, as it would create too many domestic political problems.

I have a feeling that Mueller is seeding the public mind with these money-laundering indictments. What these guys are charged with is basically what went on when the Russian oligarchs were laundering money coming out of Russia through Trump real estate.

The US, by the way, is a huge money laundering center. Offshore corps set up a Delaware corporation to buy luxury condos in the US. When they are sold, the new guy takes it into his name or just gets the shares in the Delaware corp. There are various versions of this.

Why do I think that Trump might be sweating bullets tonight? Did he use his sons in some similar dealings like this, maybe? And with Daddy Kushner and his bending-the-rules background, what skeletons does Jared have in his closet, the over confident young son running the family biz while dad was in prison?

With the FBI under attack, and Mueller as big a living Sir Lancelot as they have, what might be the chances that he wants to end his career exposing the real rot in America by doing what no one has ever done before, nail the worst of the worst – what are known as “protected entities”… Jim W. Dean ]

According to the indictment, Manafort disguised over $10 million in income from his Cyprus bank as loans. Manafort and Gates, who also maintained bank accounts in Saint Vincent, the Grenandines and the Seychelles, allegedly lied to US tax authorities and told them they had no foreign bank accounts.

“Manafort and Gates generated tens of millions of dollars in income as a result of their Ukraine work. From approximately 2006 through the present Manafort and Gates engaged in scheme to hide income from United States authorities while enjoying the use of the money,” the indictment reads.

“During the first part of the scheme between approximately 2006 and 2015, Manafort, with Gates’ assistance, failed to pay taxes on this income by disguising it as alleged loans from nominee offshore corporate entities and by making millions of dollars in unreported payments from foreign accounts to bank accounts they controlled and United States vendors.”

“Manafort also used the offshore accounts to purchase United States real estate, and Manafort and Gates used the undisclosed income to make improvements to and refinance their United States properties.”

The indictment goes on to claim that Manafort and Gates used those properties as collateral to illicitly acquire loans. The men then used these woebegotten funds in the US to support “a lavish lifestyle” for Manafort and college tuition for Gates’ children.

Manafort was indicted alongside Gates by Mueller in October. The two men have been accused of criminal misdoings during their work as lobbyists in Ukraine on behalf of former President Viktor Yanukovych and his Party of Regions: conspiracy to launder money, conspiracy to commit fraud, and failure to register as foreign agents.

However, they were indicted as part of Mueller’s special counsel investigation into alleged ties between the Trump campaign and Russian actors. None of the charges against Manafort or Gates, or indeed any of the 13 people or three organizations more recently indicted by Mueller, have been accused of collusion. Both the Trump team and the Russian government have consistently denied all charges of collusion.