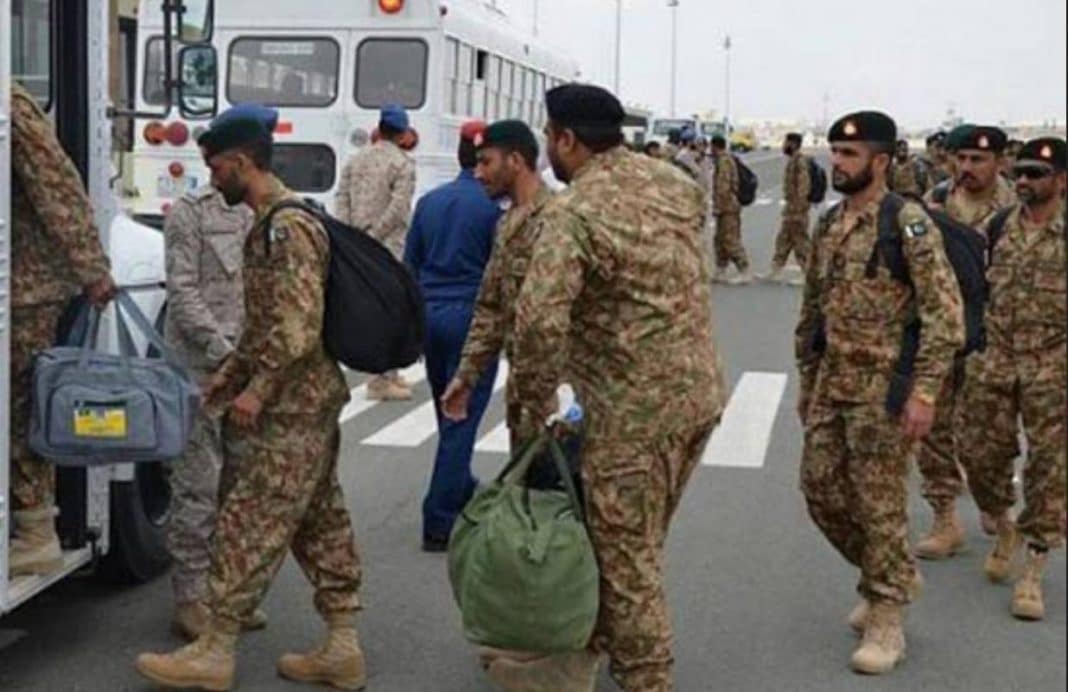 In this respect, Pakistan’s Chief of Army Staff Gen. Qamar Javed Bajwa visited Saudi Arabia where he met Saudi Crown Prince Mohammed bin Salman on February 1, this year and Saudi vice president of the Council of Ministers on February 2. Gen. Qamar Bajwa discussed matters of mutual interest and military ties between Islamabad and the Riyadh.

In this regard, on February 19, 2018, Pakistan’s Defence Minister Khurram Dastgir gave briefing to the Senate (upper house) regarding deployment of Pakistani troops in Saudi Arabia—cooperation between the two countries and the terms of engagement under which the troops will be sent to the Kingdom.

Dastgir stated that 1600 Pakistani troops are currently deployed in Saudi Arabia and 10,000 Saudi troops are currently receiving training in Pakistan…more than 1,000 troops will be deployed in Saudi Arabia over a few months’ time, bringing the tally of Pakistani troops deployed to 2,600…The apprehension that our troops will become entangled in the Yemen war is incorrect…the current and future deployments will be within the remits of the agreement…Pakistani forces have acquired new skills at a huge price due to the ongoing war against terror and will help in training the Saudi troops.”

Earlier, a press release from Inter-Services Public Relations (ISPR) also said on February 15, 2018, “A Pakistan army contingent will be stationed in Saudi Arabia on a training and advisory mission…The announcement followed a meeting between Saudi Arabia’s Ambassador, Nawaf Saeed Al-Maliki, and Pakistan Army Chief Gen. Qamar Javed Bajwa earlier today at General Headquarters Rawalpindi. The contingent will join Pakistani troops that are already stationed in Saudi Arabia and will not be deployed outside the Kingdom…Pakistan already has around 1180 troops in Saudi Arabia under a 1982 bilateral agreement.”

It is notable that during the 1970s, Islamabad signed defense protocols with several Arab countries, including Saudi Arabia, Iraq, Kuwait, Libya, Oman, Jordan and United Arab Emirates under which Pakistan Armed Forces were dispatched to these countries to impart professional training. A majority of the officials of the Armed Forces were sent to these countries on deputation, their tenure was two or three years.

It is mentionable that Pakistan is one of the 41 members of the Saudi-led Islamic Military Counter Terrorism Coalition (IMCTC) which is being headed by Pakistan’s former army chief, Gen. Raheel Sharif.

Taking note of the rumours that IMCTC or Saudi-led military alliance of Sunni countries was formed against the Shia states-Iran and Yemen, Gen. Raheel Sharif has made it clear in 2017 that he supports unity of the Islamic Ummah.

It is noteworthy that Pakistan’s military capabilities qualify it to play a balancing role in the Muslim World in general and the Middle East in particular.

In this connection, when a rift between Saudi Arabia and Iran widened in the aftermath of the execution of the prominent Shia religious leader Nimr al-Nimr as part of Riyadh’s executions of 47 persons on terrorism charges, on January 2, 2016, Saudi Arabia and other Gulf countries like Qatar, Bahrain and Kuwait, including Sudan broke off diplomatic relations with Iran. But, Islamabad continued her ties with Tehran.

Notably, on January 5, 2016, the Adviser to Pakistan’s former Prime Minister on Foreign Affairs, Sartaj Aziz said before the National Assembly. Pakistan is concerned over recent tensions between Saudi Arabia and Iran…the Muslim World faces grave dangers in the situation.”

The statement followed criticism from opposition parties which lashed out at the government in the National Assembly for not coming up with a clear stance on the situation arising out in the region because of the tension between Saudi Arabia and Iran and called for a parliamentary briefing on the issue. Aziz also gave an in-camera briefing to the National Assembly on the Saudi-Iran tensions.

Aziz maintained that Pakistan will continue to play its positive and mediatory role to ease tensions between Iran and Saudi Arabia and it advocates unity among the Muslim countries.

For the purpose, Pakistan’s former Prime Minister Nawaz Sharif and the former Chief of Army Staff, Gen. Raheel Sharif had visited Saudi Arabia and Iran. They held meetings with their rulers in a bid to defuse tensions between the two countries. They called for resolution of the crisis through peaceful means in the larger interest of the Muslim world.

Meanwhile, in his meeting with the Iranian Defence Minister Hosse Dehghan in Islamabad, Gen. Raheel Sharif had reiterated that “Pakistan takes Iran as a very important neighbouring Muslim country and the people of Pakistan have a great affinity with their Iranian brothers.” The Iranian defence minister thanked Gen. Raheel and the people of Pakistan for their efforts to bolster regional security.

And during the trip of Saudi Arabia’s deputy crown prince and defence minister, Mohammed bin Salman at Islamabad, Pakistan’s prime minister and chief of army staff had assured him to defuse tension between the two brother countries. His visit came just four days after the Kingdom’s Foreign Minister Adel al Jubeir visited Islamabad.

While, some media analysts had misinterpreted the statements of Prime Minister Nawaz Sharif and Gen. Raheel Sharif by opining that during their interactions with the rulers of Saudi Arabia, they preferred Riyadh over Tehran. However, it was not true, as Islamabad had decided to play a mediatory role between the two Muslim countries as part of a balanced approach in the Middle East. But, foreign enemies of the Islamic World manipulated the statements Pakistan’s civil and military officials who clarified that Pakistan Armed Forces are also stationed in Saudi Arabia for protection of the holy sites in Mecca and Medina, as their role would be defensive, not offensive.

Notably, despite the pressure of America, Pakistan had refused to send its troops in Syria in support of the US-backed forces which wanted to oust Syrian President Bashar al-Assad.

Similarly, in 2015, Riyadh insisted upon Islamabad to send its forces to join the Saudi-led coalition to conduct aerial strikes on Yemen. Pakistan had refused to participate in the air strikes. Instead, Pakistan’s parliament had passed a unanimous resolution on April 9, 2015, which stated, “The war in Yemen is not sectarian in nature, but has the potential of turning into a sectarian conflict which will have critical fallout in the region, including Pakistan.” It urged the government “to stay neutral in the Saudi-Yemen conflict” and to “avoid being drawn into a broader sectarian conflict between Saudi Arabia and Iran.” It called upon “warring factions in Yemen to resolve their differences peacefully through dialogue.” The resolution urged Islamabad to play a diplomatic role to end the crisis.

It is of particular attention that during his trip to Iran, Pakistan’s army chief Gen. Qamar Bajwa who met with Iranian civil and military leaders, said on November 7, 2017 that Pakistan was determined to expand its ties with Iran in all spheres, including expansion of its military and defence cooperation with Tehran.

It is worth-mentioning that the US had planned to spark a civil war between the Sunnis and Shias in wake of war on terror. For the purpose, a study of Rand Corporation, titled ‘US Strategy in the Muslim World After 9/11’ was conducted on behalf of the then US Deputy Chief of Staff for Air Force. Its report which was released on December 27, 2004 advocated that Sunni-Shia sectarian division should be exploited to promote the US objectives in the Muslim World. The report was first implemented in Iraq.

In 2004, major terror-attacks were carried out against the Shias. Afterwards, a chain of Shia-Sunni clashes started between Iraqi Shias and Sunnis, targeting each other’s mosques and religious leaders through bomb blasts, suicide attacks etc.

After Iraq’s experiment, more deadly pattern of sectarian strife and clashes have been conducted in Pakistan. With the assistance of American CIA, Israeli Mossad and Indian RAW have arranged a number of attacks on mosques and religious leaders of Shias and Sunnis through the militant groups such as Tehreek-e-Taliban Pakistan (TTP), Jundullah (God’s soldiers) and Islamic State group (Also known as Daesh, ISIS and ISIL). These outfits kidnapped and killed many Iranian nationals in Pakistan, including Iranian diplomats. ISIS and Jundollah conducted many subversive acts in Pakistan’s province of Balochistan and Iranian Sistan-Baluchistan. In this connection, Tehran has directly accused CIA of funding these types of terror attacks.

Hinting towards the US and Israel, Iran’s Supreme Leader Ayatollah Khamenei had disclosed, “The bloody actions being committed in Iraq, Pakistan and Iran are aimed at creating a division between the Shias and Sunnis…those who carry out these terrorist actions are directly or indirectly foreign agents.”

Pakistan’s leading Ulemas (Religious scholars) of the Shia-Sunni sects, including politicians have repeatedly pointed out that external conspiracies were being hatched to destroy peace in the country though sectarian divide.

It is worth-mentioning that when last year, Saudi Arabia along with several Gulf States severed diplomatic ties with Qatar after accusing it of supporting terrorist groups, Pakistan did not cut off its relations with Qatar.

In fact, anti-Muslim and anti-Pakistan elements, including some Arab countries and their media are spreading rumours by projecting the negative role of Pakistan Army in Saudi Arabia in order to create a rift between Pakistan and Iran as well Saudi Arabia and Pakistan. Such a disinformation can be judged from the reply of Foreign Office Spokesperson Nafees Zakaria in relation to deployment of Pakistani troops in Qatar. In a statement on June 11, 2017, Spokesperson Nafees Zakaria termed the reports appearing in some foreign media outlets about the deployment of Pakistani troops in Qatar as “completely fabricated and baseless.”

Nonetheless, the role of Pakistan Army in Saudi Arabia is to help in training the Saudi troops and to provide advisory services.