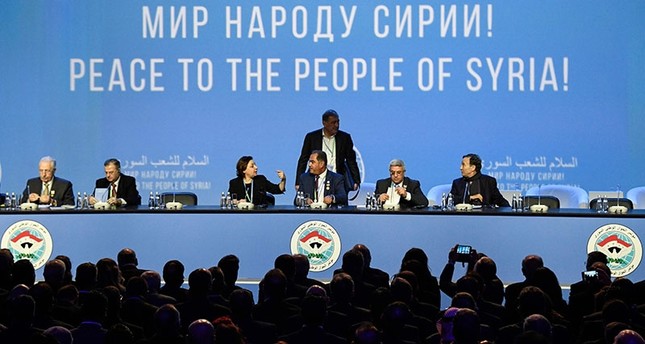 [Editor’s Note: I held off publishing this to let the reaction of the US Coalition be fully developed, so we would be past pondering what it might be.

We can now see it has initiated its “Balkanizing Syria by other means” Plan B. This involves putting forward that it is going to continue to be active, including remaining in Syria until “it” decides to leave.

Even worse, while doing this without Syria’s permission or an UN mandate, and while openly engaged in supporting proxy terrorism inside Syria, it has the gall to claim that Iran and Hezbollah, members of the Syrian anti-terrorism coalition, are destabilizing the Mideast and must be sanctioned and stopped.

Israel has even threatened war, when it also has supported terrorism in Syria.

This is not only a totally ridiculous argument, but the fact that it has gotten almost no coverage as such in corporate media justifies its being institutionally described as Fake News. Part of this problem lies in the consolidation of the big media empires which seem overly sensitive to the concerns of the Deep State, to the degree of being part of it.

Any claim to serving the public is just a fig leaf. You will also notice that the employees and unions of corporate media have never gone on strike or even conducted walk outs over this abominable state of affairs, thereby putting their stamp of approval on it.

This lulls the public into not doing anything, as we were educated that unions would be our first line of defense on social justice, most of all in protecting our rights to be informed citizens. Frankly, the media personnel are AWOL.

The public has been abandoned but for alternative media, which has been heavily infiltrated to weaken its impact, as it was so affordable to do and many willing hands at the ready. Our Founding Fathers are rolling in their graves over how easily we gave up what they gave us … Jim W. Dean]

Participants of the Syrian National Dialogue Congress in Russia’s Sochi on Tuesday adopted a 12-point statement outlining the Syrians’ view on their country’s future. The document says that Syria should preserve its sovereignty and territorial integrity, and its future can be determined only by the people of Syria in elections.

The Syrians also requested the UN Secretary General to assist in organizing the work of the constitutional committee, whose mandate will be outlined as part of the Geneva reconciliation process.

A congress participant, Archbishop of Homs, Hama and Environs Mor Selwanos Boutros Al-Nehmeh told TASS that the final document “was agreed by all participants.”

The participants of the congress have expressed their respect and full commitment for the “sovereignty, independence, territorial integrity and unity” of Syria in the first point of the 12-point document.

“In this regard no part of the national territory shall be ceded. The people of Syria remain committed to the recovery of the occupied Syrian Golan by all lawful means in accordance with the UN Charter and international law,” the document reads.

The second point stresses “respect of and full commitment to Syria’s national sovereign equality and rights regarding non-intervention.”

“Syria shall take its full role in the international community and the region, including as part of the Arab world, in conformity with the UN Charter, and its purposes and principles,” it says.

The future of Syria

In line with the third provision of the final statement, only the people of Syria can decide on their country’s future.

“The Syrian people alone shall determine the future of their country by democratic means, through the ballot box, and shall have the exclusive right to choose their own political, economic and social system without external pressure or interference, in line with Syria’s international rights and obligations,” the third point reads.

The participants of the congress believe that Syria should be “a democratic and non-sectarian state based on political pluralism and equal citizenship irrespective of religion, ethnicity and gender.”

It should also ensure “full respect for and protection of the rule of law, the separation of powers, judicial independence, the full equality of all citizens, the cultural diversity of the Syrian society, and public freedoms, including freedom of belief, featuring transparent, inclusive, accountable and answerable governance, including before the national law, with necessary effective measures to combat crime, corruption and mismanagement,” the fourth point says.

Also, participants of the congress said in the fifth provision that the state should be ” committed to national unity, social peace, and comprehensive and balanced development with fair representation in local administration.”

The rule of law

The sixth point states that the work of the country’s state and public institutions should be continuous and have “improved performance” with “reforms where necessary, including the protection of public infrastructure and property rights and provision of public services to all citizens without discrimination, in accordance with the highest standards of good governance and gender equality.”

“Citizens shall benefit from effective mechanisms in their relations with all public authorities in such a way as to ensure full compliance with the rule of law and human rights and private and public property rights,” the statement reads.

Under the seventh point, Syria should have a “strong, unified, meritocratic and national army that carries out its duties in accordance with the constitution and the highest standards.”

“Its functions are to protect the national boundaries and the people from external threats and terrorism, with intelligence and security institutions to maintain national security subject to the rule of law, acting according to the constitution and the law and respecting human rights. The use of force shall be the exclusive prerogative of competent state institutions,” the document reads.

In the eighth point, the participants of the congress have declared their “unqualified rejection of – and active commitment to combat – terrorism, fanaticism, extremism and sectarianism in all its forms and to tackle conditions conducive to their spread.”

The ninth point calls for “respect and protection of human rights and public freedoms, especially in times of crisis, including non-discrimination and equal rights and opportunities for all without regard to race, religion, ethnicity, cultural or linguistic identity, gender or any other distinction.”

It also calls for an “effective mechanism for their protection, which give due regard to the political and equal rights and opportunities of women, including by the taking of active measures to ensure representation and participation in institutions and decision-making structures, with mechanisms aimed to achieve a level of representation of at least 30% for women, and the goal of parity.”

The tenth point notes the “high value placed on Syria’s society and national identity, its history of diversity and the contributions and values that all religions, civilizations and traditions have brought to Syria, including the coexistence among its various components, along with the protection of the national cultural heritage of the nation and its diverse cultures.”

The next provision reiterates commitment to “combatting and eliminating poverty and providing support for the elderly and other vulnerable groups, including persons with special needs, orphans and victims of war, which shall include ensuring the safety and refuge of all displaced persons and refugees, as well as protecting their right to voluntary and safe return to their homes and lands.”

The final provision calls for preservation and protection of national heritage and the natural environment in line with environmental treaties and the UNESCO declaration on cultural heritage.

The document also announces the establishment of a constitutional committee comprising the government and wide-represented opposition delegation. The committee will be tasked with “drafting of a constitutional reform as a contribution to the political settlement under the UN auspices in accordance with Security Council Resolution 2254.”

“Care would be taken to ensure adequate representation of Syria`s ethnic and religious components,” the document continues. “Final agreement is to be reached in the UN-led Geneva process on the mandate and terms of reference, powers, rules of procedure, and selection criteria for the composition of the Constitutional Committee.”

The participants of the congress also requested the UN Secretary-General to assign the Special Envoy for Syria for the assistance of the Constitutional Committee work in Geneva.