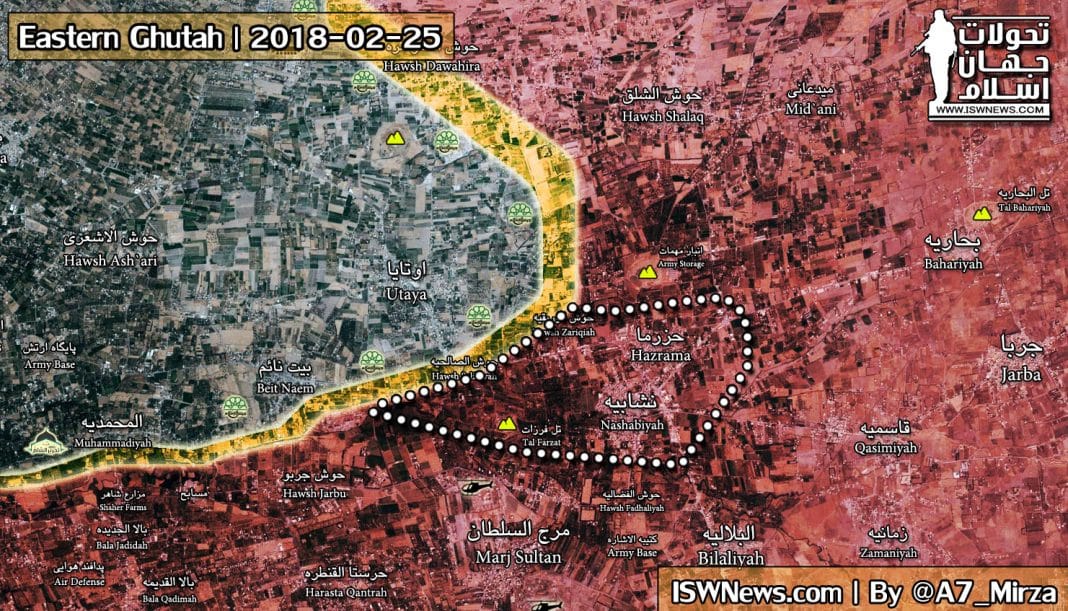 [ Editor’s Note: This East Ghouta battle is a last gasp of the US Terror coalition to tie down a lot of Syrian military power defending Damascus that could then be sent to defend the northeast areas under attack.

The roughly 400,000 civilian human shields under their control also is a big lever to control during any political negotiations. If the area is recaptured, as revealed below, the SAA will bag a good number of foreign country operatives from the US coalition.

And as happened with Aleppo, once the area is retaken, the civilians there will be able to tell the real story about what happened, and expose another black PR operation by the US Coalition.

The Ghouta jihadis will have no option but to break the truce, blow up buildings and hospitals and blame that all on the SAA, with Western media giving it huge coverage. But we are at a turning point on that now.

Everyone who wants to know already does about these orchestrated atrocity stories. The Jihadi-US Coalition terror axis has used this ruse too many times. They are at the war-crimes level now, which needs more attention. Charges and cases need to be filed now, so investigations can begin … Jim W. Dean ] 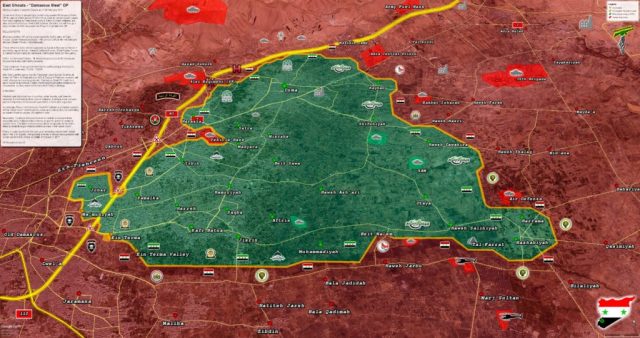 Eastern Gotta militants seek personal gains a high-profile Syrian Member of Parliament told VT that foreign-backed militants in Eastern Gotta reneged on the deals concluded with the Syrian government subsequent to squabbles aroused among them on the theory of surrender, or fighting to the end.

Dr. Nabil Toumeh underscored that the Syrian government will be flexible on reaching a long-term truce that allows Eastern Gotta militants to lay down their arms, and it may also facilitate their departure to any destination they choose, affirming that those radicals’ seek to maintain personal, not political gains.

When asked about the fight against terrorism, he said “Syrians can only defeat terrorism when western and regional countries curtail terrorist-groups’ support in Syria.

“As a Syrian citizen and a Member of Parliament I would like to ask Mr. Guterres, why is he only concerned about the innocent people held hostage by gangsters, while not showing the same concern when it comes to Damascus inhabitants whose lives are being spared daily by terror mortar and rocket attacks?”

Political opposition must not adopt language of delay

He also asked why supporters of the so called ‘armed Syrian opposition’, that holds civilians as human shields and fires daily scores of mortars and rockets on innocent people in Damascus city and other areas in Syria, were not condemned.

“In politics, opposition shouldn’t adopt the sly language.” However “the hybrid opposition in Syria, on a daily basis, slaughter innocent civilians mostly children, women and elderly amid complete muteness by the international community,” he said.

Furthermore, the MP referred to the contradictory approach adopted by UN Security Council over how to address the Syrian crisis

“Russia and China have voted against several resolutions presented by the United States, France and the UK which back the so-called ‘moderate opposition’ in Syria,” DR Toumeh said.

“The US, France, the UK and other regional countries, including Saudi Arabia, Qatar, and Turkey seek to destroy and partition Syria through their tools, namely ‘armed moderate opposition’ in accordance with a US-Israeli plot that aims to fragment the whole region and to have hegemony over its wealth,” Dr. Toumeh, said.

He concluded by saying that the overall victory of the Syrian army in Eastern Ghouta means a Triumph over US, French, British, Saudi and Israeli intelligence agencies.

VT reliable sources say “militants of Al Gotta will not desist from launching a large-scale attack on various parts of Damascus, in an attempt to hinder the Syrian army intrusion. Moreover, the sources indicates that a considerable number of foreign intelligence agents are assisting the militants there with Intel and logistics.

“This is why the US and other western countries have called for a one-month truce. They want to evacuate their operatives from Al Ghouta before being discovered,” the sources added, as happened in Aleppo, previously.

In the same context, Revd. Andrew Ashdown, from the church of England, told VT,

“In pure humanitarian terms, a ceasefire would of course be desirable, but given the bias of the UN against Syria,  and the precedents that ceasefires have been used to rearm and strengthen militants, there are big questions about whether a ceasefire would be of genuine benefit in the long t term.  The bias of the UN in support of the militants represents a major barrier to trust and any claim to neutrality, or that the intention is purely humanitarian.”

“If this is true, and it is consistent with everything that has happened and is happening on the ground, it proves that the western nations – Britain being a major player – have no intention of allowing the war in Syria to end, until the West has ‘created the conditions’ for their own goals to prevail. With no consideration for the wishes or interests of the Syrian people. A century of catastrophic consequences of our interventions in the Middle East has made no difference to our obscene policies,” Reverend Ashdown commented on the Ghouta ceasefire.

USGLC chairman Reuben Egolf; US has a national security interest to stabilize Syria

On his part, DR. Reuben Egolf, Chairman of the United States Global Leadership Council, laid out the practical steps of cooperation between United States and Syria:

ð  Ultimately, let the Syrian people decide on their future

ð  consistent throughout implementation of policies

ð  Present a launching pad for peace in the region and promote a sustainable example for democracy and religious freedom in a region plagued by radicalism, oppression, and enslavement.

ð  Easing of currency transactions from US citizens to Syrian citizenry

There is a national security interest of the USA to stabilize Syria. A strong and free Syria enables the United States to have a present and clear voice in the region. Syria was a bastion of freedom of religion and a showcase of peace and prosperity.

Examples are desperately needed in this volatile time in the Middle East and Northern Africa. Imploding this nation and feeding the chaos will further deteriorate the USA’s purpose of stabilizing the region and producing a balance and equilibrium, both politically and economically.

On its part, Moscow warned against using the truce as a ploy to achieve malicious purposes, in particular re-assembling the militants’ various factions. Moscow dispatched Sokhoi 57 aircrafts to its Lattakia base with a previous knowledge that the US may strike Syrian military positions with cruise missiles to end Al Gotta siege.