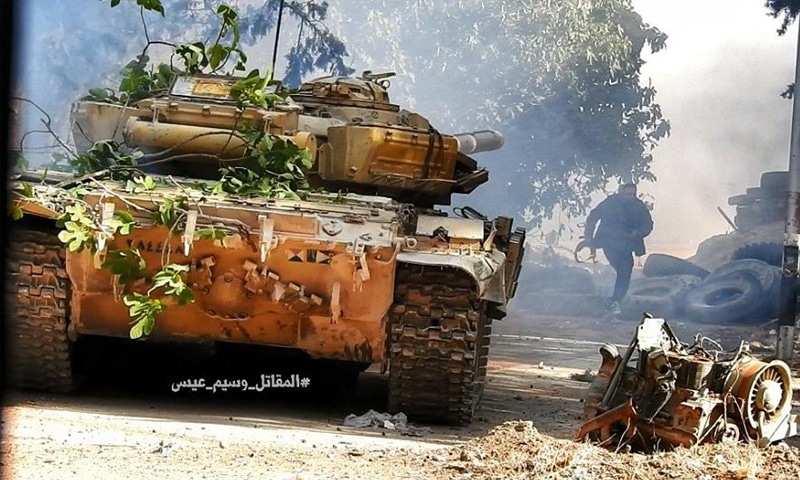 [ Editor’s Note: Mr. Sheikh gives us the quick down and dirty on the US Coalition plans to ignore the Syrian political settlement in progress by continuing to light fires inside the country and around it.

The methods are the old ones it has been using. It will keep up the endless litany of bogeyman threats from theoretical opponents that the US Coalition has vast military superiority over in terms of wining a war of attrition.

Next would come the continued jihadi staged gas attacks that Western media and our own Nikki Haley at the UN do so love. But those are getting the “big yawn” from a public that is on to that scam, as with the bogeyman threats.

Israeli media openly admits that Israel is arming and supporting Sunni terrorists in the Golan Heights, and yet continues to claim that Hezbollah poses a threat. As I have editorialized endlessly, the West mis-characterization as a threat, any countries having a right to defend themselves from attack, or to retaliate against one, shows their contempt for the United Nations Charter which they agreed to honor.

As for allied military forces inside Syria, all I would say is that Europe, which is only under threat from itself and the US, has allied forces stationed all over itself.

The EU does this at great expense when the member states are buried under in debt, and the need for these levels of military power are completely orchestrated by Deep State interests only, and the jackals that feed off their scraps … Jim W. Dean ]

With war into its sixth year, it is by far clear to all the actors involved in the Syrian conflict that Syria’s Assad is not “going home” now. But then this war was never about one person only; it was more about changing fundamentally the Middle East’s geo-political landscape in favour of the Wahabbi centre of power and rid the region of a common enemy of the US, Israel and Wahabbism: Iran.

And the way the war in Syria progressed throughout these years and the way this has changed the geo-political landscape to the orchestrators’ disadvantage means that this war in not going to end any time soon.

A mere restoration of Syrian territory and sovereignty wouldn’t do that either, for the real target of the US-Saudi nexus, Iran, remains strong, in fact much stronger than it was before the beginning of this war. Therefore, now that Russia and its allies have succeeded in voiding imperial agenda of ‘regime change’ in Syria, the US still has no intention of withdrawing.

Instead, it is now demanding from Russia to ‘distance’ itself (its interests) from that of Iran in Syria, and thus allow some space for the US and its regional allies, Saudia and Israel, to push back Iran from Syria and limit its influence.

This is hardly any doubt that this is a sure-short recipe of new conflict in the region.

The US, on its part, has already started to build up pressure. This is evident from the video the Pentagon released in the second week of February, showing its fighter jets destroying a Russian tank, giving a message to Russia about the imperative of staying clear of the next fight-in-the-making in Syria in which Israel is taking the lead, evident from its last week’s air attacks and the consequent downing of one its jets.

There is no doubt that Israel has the US backing against Iran. And there is hardly any doubt that the momentum for an armed conflict isn’t being built. Its most recent manifestation came from James Mattis on February 12 when he defended Israel’s ‘right to self-defence.’ He said:

“Israel has an absolute right to defend itself, and I think that’s what happened yesterday.”….“They don’t have to wait until their citizens are dying under attack before they actually address that issue.

So when Syria, which has made no … excuse for what they’re doing alongside Iran, when they are providing throughout for Iran to give weapons, including more sophisticated weapons, to the Lebanese Hezbollah, Israel has an absolute right to defend themselves.

It is interesting that everywhere we find trouble in the Middle East, you find the same thing behind it. Whether it be in Yemen or Beirut, or in Syria, in Iraq, you always find Iran engaged.”

And since the Israelis aren’t interested in waiting for a real attack to come to them, they are already preparing for what many in Israel have already started to call the “first northern war”, because it will be fought on both Lebanese and Syrian fronts.

The US mainstream media is not lagging behind in paving the way for this war. A New York Times report recently noted that Iran is expanding its ‘axis of resistance’ in Syria against Israel.

According to the rogue projections made in the report, “many Israelis say the danger is not just from the new Iranian-backed militias, but also from the Iranian efforts to give advanced, high-precision weapons capable of hitting sensitive infrastructure to Hezbollah.”

The claims made in the report about the possibility of Iran hitting Israel have been largely endorsed by the US officials too. According to McMaster, “What’s particularly concerning is that this network of proxies is becoming more and more capable as Iran seeds more and more” of its “destructive weapons into these networks”, requiring them to now start thinking in terms of acting “against Iran.”

Israel is prepared to do so as is evident from the recent Israeli attacks and as re-affirmed by the Israeli leadership. And while Israel’s war rhetoric has recently become highly charged, Israel doesn’t seem to be interesting in using its own ground forces. Instead, to counter Iranian presence in Syria, Israel has started to arm Syrian rebel groups. According to a report of Israeli media Hareetz:

“At least seven Sunni rebel organizations in the Syrian Golan are now getting arms and ammunition from Israel, along with money to buy additional armaments. This change has taken place at a time when America has greatly reduced its involvement in southern Syria.”

This has already been officially confirmed. According to a separate report of Times of Israel, Defense Minister Moshe Ya’alon confirmed, in the last week of January, that “Israel has been providing aid to Syrian rebels, thus keeping the Druze in Syria out of immediate danger.” While he didn’t define the nature of this “aid”, recent developments have already started to show that this “aid” isn’t just medical.

While the momentum of conflict is building up, there are many crucial go-betweens—and the most important of these is the Russian factor.

The Russians have installed its top of the line S-400 missiles in Syria, which they can use to sweep the Syrian skies any time they want. And as Russia’s Lavrov warned, sitting besides his Iranian counter-part in Moscow, the US of the dangers involved in ‘playing with fire’, it gave a clear hint of the fact that its position in Syria remains unchanged even after it has successfully protected the Syrian regime and that any new build up in Syria will have to duly consider the S-400 missile shield, which is capable of preventing the “first northern war.”